When we visited Oahu, Hawaii in January 2013, I finally got to visit the Pearl Harbor Memorial. This has been on my "bucket list" for years.

Both of my grandfathers fought in World War II. My mother's father served in the South Pacific, and my father's dad flew planes on the European front. My husband's grandfather was stationed in Pearl Harbor, but not until after the December 7, 1941 attack that brought the United States into WWII. His grandmother grew up on Oahu on the plantation that became the famous Dole Pineapple Plantation. She was a secretary to a Navy Admiral, and had been scheduled to go on a date with a naval officer the evening of December 6, 1941. When she canceled the date, the officer stayed on base. Unfortunately, he was one of the thousands of casualties on the Day that will live in Infamy.

This article is not about the Pearl Harbor attack itself. But some background is necessary to put the Pearl Harbor Memorial and the USS Arizona into perspective. Nearly 80 years ago, the event was the "September 11" of the day. Japanese air forces decimated military bases across the island of Oahu on a Sunday morning - totally by surprise. The aim was to debilitate American military so that they would be unable to arrest Japanese advancement into territories across the South Pacific. And, it occurred during peace negotiations in Washington, D.C. between U.S. and Japanese diplomats.

As most people know, the events at Pearl Harbor were the tipping point that brought the United States into WWII. If you visit Hawaii, you should definitely set aside a day to see Pearl Harbor. The site is of major historical significance.

Hours: Open every day of the year for tours, except Pearl Harbor Day (December 7), Thanksgiving, Christmas, and New Years Day. The park is open from 7:00 a.m. to 5:00 p.m. Tickets for the boat shuttle to the USS Arizona are on a first come, first served basis.* Timed programs to the memorial begin at 8:00 a.m. and run through 3:00 p.m.

*TIP: Crowds get larger throughout the day. We arrived at 8:00 a.m. on a Saturday in January and had to wait until 10:15 for an open boat shuttle. Many people arrive at 6:30 a.m. to obtain shuttle tickets.

Cost: Admission to the World War II Valor in the Pacific National Monument (the USS Arizona Memorial) is free. However, if you chose to make a reservation in advance at www.Recreation.gov (recommended during busy seasons - see above), there is a $1.50 per ticket convenience fee

Attractions: There are several museums that include photographs, displays and instructions regarding the build-up to the Pacific War and attack on Pearl Harbor. A self-guided tour with headphones is available for a fee. For those visiting the USS Arizona, there is a 15-minute pre-boarding movie. In addition, visit the USS Bowfin Submarine Museum & Park, and the Battleship Missouri Memorial and Pacific Aviation Museum on Ford Island.

A Brief History of Pearl Harbor and the USS Arizona Memorial

Many ships were damaged or destroyed on the Sunday morning of December 7, 1941 when Japanese air fighters surprised the Pearl Harbor base. The United States was unable to bring the USS Oklahoma, USS Utah and the USS Arizona back into commission after the attack. Other ships were repaired and recommissioned.

All of the 2,390 military and civilian deaths that day were tragic. However, the USS Arizona sustained the greatest damage and loss of life. In all, 1,177 crew members died due to the missiles that hit the ship and its sinking thereafter. These heroes are buried within the remains of the sunken vessel and remain there to this day. The USS Arizona remains where it fell: off Ford Island on the "Battleship Row" of Pearl Harbor.

Amazingly, the ship continues to slowly leak oil from its watery grave. The so-called "black tears" continuously and slowly bubble up from the sunken remains.

In 1950, the USS Arizona Memorial was originally a flagpole attached to the broken mainmast of the ship (pictured below). The present iconic structure was completed in 1961, built over the wreckage of the battleship. When you arrive at the memorial via shuttle boat, you are asked to quietly and directly enter the structure, without stopping to take photographs outdoors. The memorial is comprised by three primary sections: an entry and assembly room, a central area for ceremonies and observation, and the shrine room. There, the names of all deceased heroes that were on the USS Arizona are engraved in marble. It is truly overwhelming to witness the scope of the tragedy. In addition, on either side of the marble wall are additional memorials dedicated to those that have passed away since Pearl Harbor Day, up to the present.

I can speak from personal experience when I say that, as moving as the memory of December 7, 1941 is, there is nothing like visiting the actual site where sailors and other brave heroes met their demise on that tragic Sunday morning. Anyone with loved ones that fought in the war will be moved by the Pear Harbor Memorial. It is definitely worth the visit!

No matter your nationality, age or heredity, visiting the USS Arizona is a serious, sad experience. The contemplation of the innocent loss of so many lives on that day, will give pause to anyone.

Pearl Harbor 70 Years after the Attack

Before your Visit to the Pearl Harbor Memorial

There are several, very important considerations to keep in mind before you visit the Pearl Harbor Memorial. Having just visited, I highly recommend that you review these tips to minimize potential frustration and help plan in advance:

Underwater Tour of the USS Arizona in Pearl Harbor

Have you Visited the Pearl Harbor Memorial on Oahu, Hawaii 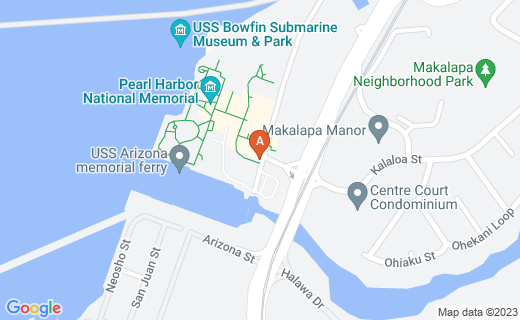