Athlyn Green makes her home minutes away from the Bay of Fundy. She enjoys the huge tides, rugged coastlines, and stunning vistas.

Peggy in the Wave

The Most Popular Tourist Attraction in Atlantic Canada

Peggy's cove offers a perfect blending of elements: sparkling blue ocean waters, bleached and weathered rocks worn smooth by wave action, and a lighthouse that looks out over Atlantic waters. Waves crash and spray over the the rocks and no matter the weather, Peggy's Cove, in its many moods, is a spot that offers an unbeatable canvas, one that painters and photographers strive to capture.

It is the most famous working fishing village in the world and one that offers plenty of exploring and photo opportunities. Storyboards throughout the area detail interesting area tidbits and facts, local shops offer Maritime souvenirs, and cafes offer an assortment of delicious treats.

Visitors are sure to be impressed by the sheer power of the waves, and even those who stay well back from the edge have been sprayed or drenched when a high wave came in unexpectedly. There no shortage of the thrill factor in this unique corner of Canada.

A shipwreck on Halibut Rock... a lone survivor...

A Name and a Legend

How did this rocky outcropping get its moniker Peggy's Cove?

Originally called Eastern Point Harbor, (a lackluster name, at best) the cove may have taken its name after St. Margaret's Bay because Peggy is another name for Margaret--or, it is possible the name could have arisen in honor of the wife of an early settler to the area.

Legend is far more interesting and weaves a tale of the sole survivor of a shipwreck in the 1800s, who was given the name of Peggy. Villagers would say, "Let's go visit Peggy of the cove." Peggy, it was said, later married a villager and the handle, "Peggy of the cove," continued and eventually became the name of the place.

Peggy's historical roots have been strengthened by outside sources who remember the survivor.

Whatever the origin of the name, one can't help but think that the name has helped to stimulate interest in this area of Eastern Canada.

One of the most-photographed structures in Atlantic Canada, this lighthouse has earned distinction as being one of the most recognizable lighthouses in the world.

Built in 1915, the famous lighthouse marks the eastern entrance to St. Margaret's Bay. The lighthouse stands sentinel on an impressive granite outcropping, known as Peggy's Point and is one of the most recognizable lighthouses in Atlantic Canada and indeed the world.

While tourists who venture out on the rocks around the lighthouse stand a chance of being sprayed by the turbulent waters, the smooth rocks and giant waves present additional hazards. Each year, unlucky individuals are actually washed off by rogue waves. Sadder still, the sea has claimed its share of hapless victims over the years.

Peggy's cove is 43 kilometers from Halifax and is still an active fishing village, one of many along the rocky coastline bordering the Atlantic ocean.

It is likely very similar to how it was in Peggy's time. Strict land use regulations are in effect to preserve the area, with most property development prohibited in order to prevent inflation of property values.

The rocks bear testimony to the power of the waves and have been worn smooth against the forces of relentless tides and mighty storms that lash the coastline.

Where Waves and Rocks Collide

Water on Either Side

Power of the Atlantic

While warning signs appear in prominent locations, visitors ignore these at their peril and risk being swept from the rocks and into the sea. The waves are unpredictable and a spot on the rocks that was dry one moment can be drenched the next. Unless one has lived off the Atlantic, it is hard to comprehend the magnitude and sheer power of the waves.

Wave Action and Legend Spawn Peggy of the Cove Books

Local author, Ivan Fraser, grew up in the area, witnessing the power of the waves and hearing tell of the mysterious Peggy. He decided to bring the legend to life in a series of books about Peggy, which includes a beautifully illustrated children's book, a coloring book, and two novels suitable for older kids, teens, and adults. 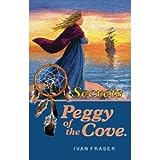 I Couldn't Put This Book Down

Peggy of the Cove: Secrets--The sole survivor of a shipwreck, a young waif is taken in by her rescuers. Peggy finds a new life in a quaint seafaring village but has no memories of her past, and she seeks out to claim her lost identity, which takes her on an adventure to Scotland.

From her rescue to daily life in the village, from the appearance of a strange ship and Peggy's trip to Scotland to a castle to discover where she came from, from a dream catcher and riddles she has to solve, Peggy, as discovered through the pages of this book, was entrancing. Fast-paced and thoroughly enjoyable. One of those books that once started, can't be put down until finished.

A Painting Of Peggy

Peggy is to the Cove What Anne Was to the Island

Peggy, the sole survivor of a shipwreck on Halibut Rock, is fast becoming Nova Scotia's heroine and it has been said that she will be to Nova Scotia what Anne was to the Island.

Both of these characters, two orphans who overcame obstacles, have fired imaginations around the world and have helped to place an indelible mark on Eastern Canada.

Waves Crash Against Peggy's Cove During Hurricane Bill in 2009

While many photos depict Peggy's Cove in summer or during storms, the cove is also a delight in winter.

The Village in Winter

Snow Blankets the Cove and for Now, All is Serene

No matter what season, the cove offers an interesting blend of colors and textures, set against a backdrop of stunning blue sea. Each season lends it's own particular hues.

Where is Peggy's Cove?

Peggy's Cove is situated on the eastern shore of St. Margaret's Bay. The site is a short distance from Halifax and is an actual fishing community with a small number of full-time residents. 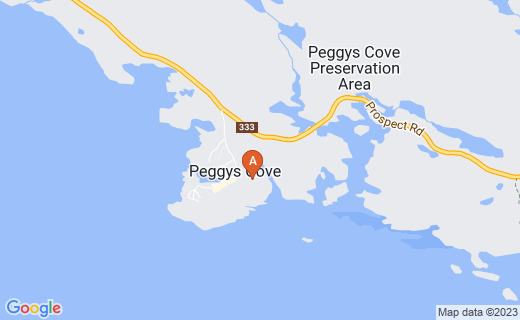 Those who wish to visit Peggy's Cove can take the St Margaret's Bay Road to the Prospect Road exit. Turn left on route #333 or take Highway 103 to Exit 5 and follow the signs. This drive takes about an hour of travel time.

Tours are also available and information can be accessed online.

Enjoy the Sights and Sounds

Once one reaches Peggy's Cove, they step into a working fishing village with harbor, boats, nets and traps. As well as colorful homes, the village boasts quaint shops and galleries and restaurants. For hikers, bouldering and hiking trails await.

Have You Been to Peggy's Cove?

Peggy's Cove Boat Tours - A great way to see the landscape and shoreline from the water.

William E. deGarthe Memorial Monument - An impressive carving out of stone depicting actual fishermen from the Cove who lost their lives at sea.

Swissair Flight 111 Memorial - This memorial may be of interest to avian buffs or those connected to the tragedy.

Lighthouse Route - Visitors can see rugged coastline and more lighthouses along this route that continues along Nova Scotia’s South Shore. Nova Scotia has the largest number of lighthouses in Canada.

Peggy's Cove is a Nova Scotia hot-spot, which sees a considerable number of visitors each year. This unique corner of Canada is well worth a visit for those traveling in Atlantic Canada.