Bandelier is one of the best national monuments you've never heard of.

Of course Mesa Verde is amazing; my family and I have been there several times and it never fails to impress. We went to Chaco Canyon a couple of years ago and its spectacular ruins left us speechless. But Bandelier National Monument remains one of my favorites of all time for a few reasons: 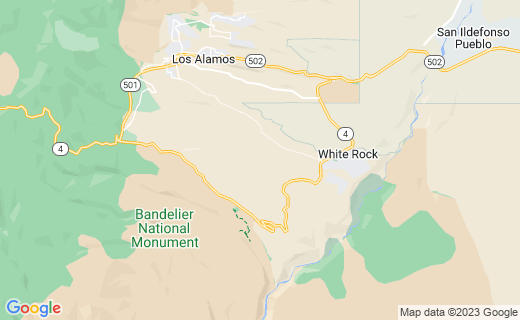 Bandelier's Visitor Center is open every day from 9-5, except Christmas and New Year's Day.

A Word Abouth the Labs

There is only one road in and out of Bandelier National Monument; as you get closer to the Monument, it's hard to miss the barbed wire fences and warning signs.

That land belongs to the National Laboratories.

To get from Bandelier into the city of Los Alamos (to say, get some lunch), you have to drive through a part of the main Labs compound. There is a military guard station; you have to show your ID to continue. You have a strong feeling you're being watched, and they tell you not to stop or park until you reach Los Alamos.

My husband and I were military, and this was unlike any military base I've ever been on. Spooky!

A final interesting note: The inhabitants of Bandelier - like those of Mesa Verde and Chaco Canyon - disappeared without a trace. There are theories that they, for example, left the area because of historic drought, but there is little evidence to back up the theories. The spooky reality is that no one really knows where they went. The location of Los Alamos really gets you thinking about that alien-looking petroglyph at Bandelier, and what really happened to the people who lived there so many hundreds of years ago!