Places to Visit in & Around Dehradun (A Travelogue)

While planning our summer vacation last year, we faced an unusual problem. Almost all the nearby hill stations were over crowded due to tourists and some were even facing acute water shortage. Situation was particularly bad in Shimla and Manali. We had almost cancelled our holiday plans when I remembered that my maternal uncle has a holiday home in Dehradun.

Dehradun is the capital of Uttarakhand state in India and is located in the Doon Valley at the foothills of Himalayas. The city has a pleasant climate and provides a gateway to popular hill station Mussoorie and pilgrim sites like Haridwar & Rishikesh. So I talked to my uncle and finalized the trip. We were quite excited because we could also take our dog along on this trip. 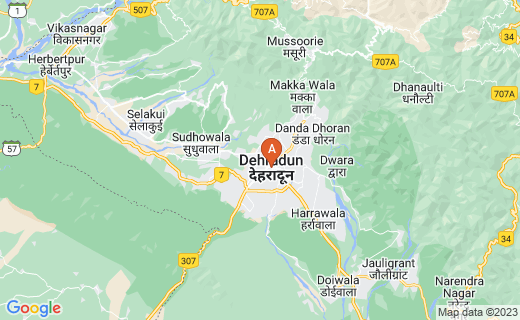 It is always the same with mountains. Once you have lived with them for any length of time, you belong to them. There is no escape.

We set off for our destination in the morning. It takes approx. 5 hours from Chandigarh to Dehradun. The drive was pleasant with lush green hills all around. But our car broke down when we were just 45 kms from Dehradun. Luckily there was a mechanic nearby who fixed the car but it delayed us by almost three hours. We reached Dehradun by 4.00 pm. My uncle's house turned out to be in a village at the outskirts of Dehradun. The road to the village was pathetic but all our complaints vanished when we reached there. It was a small village with only few houses. The sight of the mountains, the gushing stream, greenery all around and absolute calmness was amazing. In the evening, we went for a long walk along the stream.

The next morning, we set off for Mussoorie which is a popular tourist destination. It is almost an hour drive from Dehradun. However we were stuck in a traffic jam for two hours on our way. Over the years, Mussoorie has been overcrowded during the summers and this has resulted in traffic jams and water shortage. We went to Company Gardenwhich is a well maintained picnic spot with a mini lake, a flower garden and an amusement park in it. We spent quite some time there and after having a sumptuous breakfast, we went for a stroll on the Mall Road. Located in the heart of Mussoorie, the Mall is a colonial relic with benches and lamp posts filled with small and large shops displaying the best products. Tibetan carpets, local jewelries, brass statues, wooden crafts work, Garhwali paintings and woolen items can be bought from here.

We have been to Mussoorie earlier too, so we decided to skip the sight seeing and spend time at the Mall Road instead enjoying the beautiful sight of the rolling green slopes juxtaposed with the snow-capped peaks of the Himalayas. In the afternoon, we returned and on our way, we stopped at Sahastradhara. Sahastradhara which means 'thousand fold spring' is popular for its ecstatic beauty and therapeutic value since its water contains Sulphur. We also enjoyed a stunning view of the surroundings while enjoying a fun ropeway ride. The ropeway provided airy trip to the gorgeous mountain top. Then we headed to Robber's cave which is a river cave about 8 kilometres from Dehradun. This natural formation has river water flowing from the middle of a cave. But by the time we reached there, the entry for tourists had been closed down. So we were a bit disappointed but overall, it was a great day.

People come and go, the mountains remain. Mountains are permanent things. They are stubborn, they refuse to move.

We set off for Santala Devi temple in the morning. The temple is situated on a cliff at an altitude of 2083 m near Jaitunwala in Dehradun. This temple has great cultural and religious significance. According to legend, Santala Devi, along with her brother, on realizing that they would not be able to fight with Mughal Army, abandoned their weapons and began praying to the god. A divine light emerged as a consequence and they both turned to stone statues. A shrine was built at the place and on every Saturday, number of devotees visiting this shrine as it is regarded as the day of Goddess Santala.

The temple is situated on the top of a hill and the trek was very daunting. It took us two hours to reach the temple. Though it was quite tiring but I loved my first trekking experience. We came back in the afternoon and spent the rest of the day at home.

Early morning, we left for Rishikesh, a most tranquil place which is surrounded by hills and bisected by the wide and sluggish Holy Ganges. Rishikesh is often claimed as the `Yoga Capital of the World' due to a large number of meditation retreats, yoga centres and ashrams. After a long walk from Laxman Jhoola to Ram Jhoola, we had breakfast at the famous Chotiwala restaurant. I have been to Rishikesh numerous times and the serene beauty of the Ganges never cease to amaze me.

It is said that the great sage Raibhya Rishi did severe penance here and as a reward, God appeared to him in the form of Hrishikesh, hence the name. Rishikesh has numerous ashrams which are recognized as centers of philosophical studies, yoga and meditation. Back in the 1960s, Rishikesh shot to instant fame when The Beatles came here to stay with their guru, the Maharishi Mahesh Yogi. My son was keen to visit this ashram which is now popularly known as 'Beatles ashram'.

Beatles ashram is an abandoned place and mostly in ruins but Uttarakhand's Forest Department has converted the ashram into an eco-friendly tourism destination. The ashram is located in a beautiful spot within the Rajaji National Park with the river Ganga flowing quietly behind it. Die hard Beatles fans visit the ashram from all over the world. Beautiful graffitis adorn the walls of the ruins. It is definitely a place worth visiting.

From Rishikesh, we went to Haridwar which is around 20kms away. Due to summer vacation, the place was over-crowded. The ghats on the banks of the Ganges were crowded with people who had come from far away to take the holy dip in the river. According to our scriptures, the Ganges is a holy river and taking a dip in its waters can get you rid of sins accumulated during life. After a refreshing dip in the holy Ganges, we had the lunch at the chotiwala restaurant near the ghat. After a tiring but refreshing day, we came back to Dehradun by night.

The adventure is not in getting somewhere, it’s the on-the-way experience. It is not the expected: it’s the surprise

Our last day in Dehradun was reserved for local sightseeing. We visited the beautiful Mindrolling Monastery. It is an architectural masterpiece with several sections. Beautiful gardens, numerous shrine rooms, and the tallest Stupa in Asia are situated within the monastery. The Ngagyur Nyingma College within the premises offers advanced Buddhist studies to monks. What caught my attention was the beautiful, tall statue of Lord Buddha. The monastery also has small eaterines in and around where you can eat authentic Tibetan delicacies.

We also visited the famous Tapkeshwar Mahadev temple. It is a humble cave shrine dedicated to Lord Shiva. Simple and charming in its appearance, the temple is situated along the banks of a stream which adds to its serenity. This cave was once resided by the famous guru Dronacharya and is considered to be the birthplace of Ashwathama.

After a refreshing and rejuvenating vacation, we headed back home the next day with memories to cherish for a lifetime.

Rocky, Mayur on a food spree in Dehradun