Places to Visit in the States: The Ava Gardner Museum in Smithfield, North Carolina

My rating for this tourist attraction

I never really followed Ava Gardner's career...I was more a Hepburn fan-either one of the ladies. However, when I discovered that there was an Ava Gardner museum within a short drive from my home I decided to investigate.

My nephew and I took the drive on a Sunday morning and arrived shortly after they opened. Other than holidays, the museum is open seven days a week. J is not interested in Gardner, but he enjoys a good road trip and obliged me while I slowly moved through the exhibits taking photos and jotting notes.

The museum is quite small, with a gift shop that adjoins the lobby, an auditorium room, which shows a biographical film about Ava, and memorabilia exhibited in display cases. I was very interested in the gowns Ava wore in some of her productions, and the personal pieces of artifacts with a posting of its history. Some of the artifacts included dishes from her home in London, a record with the song Frank Sinatra wrote for her, and some of her gifts to Sinatra: a jewelry case and a watch.

The walls were adorned with either photographs of Ava, or old movie posters. Another wall exhibit held a display of the awards she had won, such as the Box Office Blue Ribbon Awards.

The museum can be easily completed within one hour, including watching the biographical piece. J and I spent more time touring due to my note taking. It is an interesting tribute to one of Hollywood's legendary stars, but even more delightful if you happen to be an Ava Gardner fan. Fan or not, there is no disputing Ava Gardner's natural beauty, despite the Hollywood glam.

The museum is one of the highlights of Smithsfield, North Carolina, and I would recommend a visit if you happen to be in the area. It is located southeast of Raleigh, in Johnston County. I rate this tourist spot a 5, because they have done an excellent job bringing in items that belonged to the family, and personal items from Ava's collection. The staff is friendly and helpful; the little gift shop is quaint-J and I bought a small jar of 'Moonshine' Jelly for a reasonable price; and the exhibits are well displayed.

Location of the Ava Gardner Museum 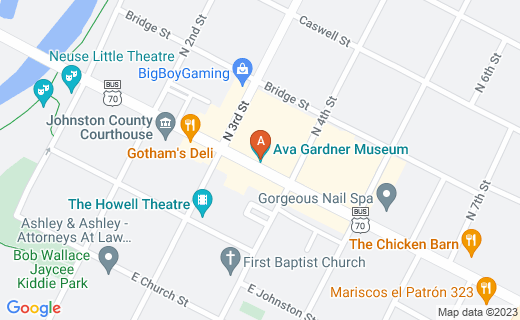 Ava's Family Photos Through the Years Ava Gardner was considered one of the hottest female stars in Hollywood at the height of her career. The green eyed beauty is listed #25 in the American Film Institute's list of Greatest Female Stars.

Born on Christmas Eve, 1922 in Grabtown, North Carolina, (a small town near Smithfield), Ava was the youngest of seven children born to Mary Elizabeth, ('Mollie') and Jonas Bailey Gardner, who were cotton and tobacco farmers. When the Gardners lost their land they found other jobs. Jonas worked in a local sawmill and Mollie began cooking and cleaning for a boarding school for teachers of Brogden.

At age thirteen, Ava moved with her family to Newport News, Virginia, where Mollie managed a boarding house. When Jonas died of bronchitis in 1938, the family soon returned to North Carolina.

While Mollie opened a boarding house for teachers in Rock Ridge, Ava attended Rock Ridge High School. After her graduation in 1939, she attended secretarial school at the Atlantic Christian College.

Grabtown, North Carolina is the birthplace of the legendary screen star: Ava Gardner. Just a short distance from Smithfield, her final resting place, this book tells the biographical story of the beautiful Ava Gardner.

How Ava Gardner was discovered by Hollywood

The story of Ava's Hollywood screen test is nothing short of a Hollywood movie itself. Ava went to New York to visit her sister, Beatrice, and her brother-in-law, Larry Tarr. Tarr was a professional photographer and offered to take some portrait photos of Ava. He displayed the photos in his office window and they were noticed by a young law clerk, Barnard Duhan.

Duhan hoped to get a date with her and asked Tarr's receptionist for her number. He posed as a Hollywood talent agent, but when he was turned away he made a comment that her photos should be sent to Hollywood.

From that remark, the Tarr's sent her photo profolio to the MGM New York office where Al Altman, the head of the talent department, set up a screen-test. Once in New York, Altman had such a difficult time understanding Gardner due to her heavy southern accent, that he only directed her to perform a simple walk to a table holding a vase of flowers.

Although Altman thought she was one of the most beautiful women he had met, he was not hopeful that her test went well, but was surprised with the final results. He sent the screen test to Louis B. Mayer, the head of MGM, who agreed to offer her a standard contract.

Accompanied by her older sister, Beatrice, Ava went to California in 1941. She would be earning a weekly wage of $50 and the initial contract would last for seven years. Once she was in Hollywood, the studio quickly connected her with a speech coach to teach her how to annunciate more clearly due to her heavy southern accent.

It was after some 25 small parts, including nonspeaking roles and walk-ons, before Ava got her big break in 1946. The movie was The Killers, based on a short story by Ernest Hemingway. The leading man was Burt Lancaster, cast as 'The Swede'-his screen film debut. Ava played Kitty Collins and when it was all over her career was well on its way. The film was selected for preservation in 2008 in the U.S. National Film Registry.

Fun Facts about The Night of the Iguana

The Night of the Iguana was filmed in Mexico in 1963. The cast included Ava Gardner, Richard Burton, Sue Lyon, Deborah Kerr, and James Ward. Elizabeth Taylor was also there, but not as a cast member. Taylor came along to keep her jealous eye on Richard Burton. To relieve the tension between Taylor and Burton, director John Huston gave each cast member, as well as producer, Ray Stark, and visiting guest, Ms. Taylor, a gold plated derringer and five gold bullets. The bullets were actually empty-all powder was previously removed and the name of a cast member was inscribed on each bullet.

All in fun, the joke was effective and the tension had been broken.

A relative gave the Ava Gardner Museum her gun in 2011, and her bullets bore the names: Burton, Taylor, Lyon, Kerr, and Stark. It is one of the more interesting exhibits at the museum.

In 1953, Ava was nominated for an Oscar as Best Actress in a leading role for her role as Honey Bear Kelly in the movie Mogambo. Here are additional awards and nominations:

1954-Won the Box Office Blue Ribbon Award for the movie Knights of the Round Table.

1957-Nominated for the BAFTA, (British Academy of Film and Television Awards), for Best Foreign Actress in the movie: Bhowani Junction.

1958-Seventh Place in Nomination for a Golden Laurel Award as Top Female Star.

1960-Nominated for the BAFTA for On the Beach.

1960-Won the Star on the Walk of Fame Award for Motion Pictures.

1964-Won a Box Office Blue Ribbon Award for: Seven Days in May.

1964-Nominated for the Hollywood Foreign Press Association Award: The Night of the Iguana.

1965-Nominated for BAFTA award for: The Night of the Iguana.

1965-Nominated the Golden Globe Award for: The Night of the Iguana.

1966-Won the Box Office Blue Ribbon Award for: The Bible...in the Beginning.

Mickey Rooney was contracted by MGM studios and that is where he met the gorgeous Ava Gardner. MGM had a clause in their contract that forbade the actors to marry one another, but Ava and Mickey received permission from the head of the corporation: Louis B Mayer. On January 10, 1942 Rooney married the young 19 year old Ava. She divorced him a year later.

Ava's second marriage, age 21, was to the jazz musician and bandleader: Artie Shaw. Again, the marriage lasted for just a year.

In her third, and final marriage, Ava fell in love with Frank Sinatra. Although they had a tumultuous marriage, he called her 'Angel' and he was the love of her life. They remained friends for the rest of their lives. It was during her marriage to Sinatra that Ava had two abortions. Her reasoning was that they were not able to handle the responsibilities of a baby.

Gregory Peck became one of Ava's dearest and long time friends. They co-starred in three movies together and after Ava's death, Peck provided a home for Ava's housekeeper and dog.

Ava had a two decade friendship with the idiosyncratic Howard Hughes. Hughes showered Ava with birthday and holiday gifts throughout the years, begging her to marry him, however, Ava remained just friends.

She moved to Spain following her divorce from Sinatra and became friends with Ernest Hemingway who nicknamed her: 'Daughter'. Fascinated with bullfighting, she met Luis Miguel Dominguin, a professional bullfighter, who became her lover for many years. She also had a boyfriend, Benjamin Tatar.

Song: I'm a Fool to Want You The museum houses over 20,000 pieces of personal and historical information. One showcase that stood off by itself held a square jewelry box on one side; on the other was Frank Sinatra's watch, which Ava had given to him with the inscription: To Frank and desert nights.-Ava.

One of the things that Sinatra did was he wrote a song for Ava, along with Joel Herron and Jack Wolf. It was recorded once in 1951, and again in 1957.

Following her divorce from Frank Sinatra, Ava moved to Spain and lived there for ten years. She then moved to London. Due to her years of heavy smoking Ava was diagnosed with emphysema in her later years. She also had an auto-immune disease, possibly lupus.

In 1986 Ava experienced two strokes and became paralyzed on one side of her body. She became bedridden and depressed, fatigued and weakened. Sinatra paid for her medical expenses and insisted she see a specialist. She died in 1990 after complications from pneumonia.

Gregory Peck took Carmen, her housekeeper, and her pet dog into his home following her death. Her body was brought back to North Carolina and is buried in Sunset Memorial Park Cemetery, along with other family members. The cemetery is located in Smithfield, North Carolina. Throughout the museum there were carefully placed displays of some of the clothing Ava wore. A few were from favorite wardrobe pieces, such as the designer dress given to her by Howard Hughes as a gift. This beautiful orange silk dress was donated to the museum in 2011.

An exquisitely embroidered cape was worn as a promotional piece to advertise the movie: The Barefoot Contessa. It was made from silk satin and embroidered with gold threads.

A full length black gown from the movie: The Sinner shows off what her tiny waste looked like. It measures 18 inches.

A knee length dress with a shawl came from the movie: East Side West Side.

And of course, the beautiful red 'belle' gown from Show Boat was on display.

The always glamourous, Ava Gardner. She was born on a tobacco farm, but died after a long and unbelievable career, as a leading lady.