Places to avoid in Paris

Paris is both the most populated city in France, and the nation’s capital. The city centre is home to some 2.25 million people, but the wider metropolitan commuter belt region encompasses a population of 12.29 million.

Every year though, the static population is boosted by an influx of national and international visitors; and every year 17 million international tourists visit Paris, and a further 10m French people travel to their capital city. In the eyes of many, Paris, just like Venice, is a city to which everyone should travel once in their lives.

Those who visit Paris and the surrounding area will take in the likes of the Louvre, the Eiffel Tower, Arc de Triomphe, Notre Dame, Disneyland Paris and the Palace of Versailles; and each of these tourist attractions welcomes millions of people each year.

The excitement and pleasure of visiting Paris though is often tinged by a sense of unease, and just as with any big city, visitors are often wary, wanting to know which areas are to be avoided. Paris is often regarded as a dangerous city, although this is, in the main, a misconception.

On the whole Paris is actually a safe city, and the recorded numbers of violent crimes are low when compared to many other Western European cities, and also those of North America.

One reason why Paris is often perceived to be dangerous is because of the periodic riots that occur in the city. Such riots though occur in the suburban developments of the city, areas which are a distance from the city centre of Paris. These areas are of course amongst areas of Paris which should be avoided by the casual visitor, but in all honesty there is no reason why a tourist should find themselves in these suburban areas. 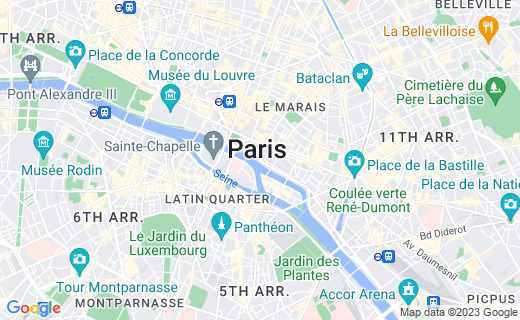 Whilst levels of dangerous crimes are quite low, crime itself is not unknown within Paris, and for the average tourist, the biggest problems are likely to be theft and pick pocketing.

Basic hotel security will prevent many issues to do with theft, and keeping personal possessions like bags and cameras on your person will do likewise. The possibility of being targeted by a pickpocket though is arguably more difficult to avoid.

In Paris, pickpockets operate in the vicinity of most of the major tourist attractions, and as these are not areas that a tourist would wish to avoid, the only thing to make sense is to make it as difficult as possible for a pickpocket to remove anything from your person. Discretion when it comes to things like phones, cameras and purses/wallets is probably the best advice.

Although pickpockets like to operate amongst crowds, as a general rule in Paris, as in any large city, crowds offer a degree of safety.

The Arc de Triomphe by Night

Paris during the day I packed with tourists, but even at night many attractions are busy, with the likes of the Arc de Triomphe lighted up. The overall nature of Paris though does change, and it is during the evening and night, when areas of the city are often talked of as areas to avoid.

Areas that are mentioned as areas to avoid in Paris include the 18th Arrondissement around Montmartre and also the Quartier Pigalle. Whilst these two areas are talked of as areas to be avoided, avoidance is normally due to the seedy nature of the areas, not because they are dangerous. The sex shows and prostitution that have long been associated with Pigalle are far more evident at night than during the day, and the likelihood for shock is high but physical crime is relatively low.

There are areas of Paris that should probably be avoided at night, and these include the Bois de Vincennes and the Bois de Boulogne, the two largest public parks in Paris. The parks are very pleasant to visit and walk through during the day, but at night the darker side of Paris is more obvious, with areas of both given over to prostitution and drug dealing, despite the efforts of the Parisian authorities.

At night the Paris Metro system is still the safest way to get around the city; and it also the most frequently used method by visitors. In general the RER should be avoided, but this because the RER operates to and from areas on the outskirts of Paris. At all costs unlicensed taxis must never be used.

The Metro system though is safe even at night, as long as basic safety measures are taken. Going with the crowd, and making use of the busier carriages, rather than the empty ones, should mean no problems occur.

At night Metro stations can be attractive to gangs of youths, especially stations like Stalingrad, Gare du Nord and Les Halles, but even then these stations remain relatively safe locations.

Paris is a great city to visit both during the day and at night, and is no more dangerous than any other major cities. Indeed many visitors feel safer in Paris than many other European capital cities. Basic precautions should be taken, and keeping with the crowd, and avoiding walking the streets alone at night, are something which is recommended, but even these safety precautions should not impinged on a pleasant visit to the capital of France.