Snorkeling at Polhena Beach: one of the Best Beaches in Sri Lanka

How to find Polhena Beach

Matara is one of the main cities along the Southern coast of Sri Lanka, next in importance to Galle in Southern Province. Polhena Beach is the romantic gift of mother nature to Matara. It is located at the coordinates 5°56'9"N 80°31'34"E. 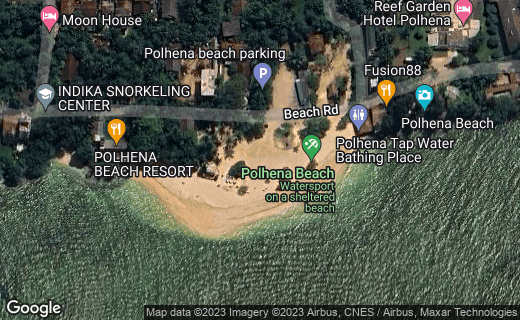 Polhena Beach is special because of its 4 kilometer long coral reef lying about 200 meters off the shore, spreding parallel to the beach. Strong waves of the Indian Ocean come rolling towards the shore, but they all crash on Polhena reef, nearly 250-300 meters before it reaches the shore. Polhena beach is therefore free from big waves. It looks like a lake, sending small ripples to wash the white, sandy beach.

Polhena beach is the weekend spot of the fun lovers of Matara since a long time. I too used to go to Polhena for a sea-bath on every weekend when I was a schoolboy. Today, Polhena beach is crowded with local and foreign travelers right throughout the week. Actually, sea-bathing is fun when the place has a little crowd.

Polhena Reef Gardens Hotel is the oldest hotel in Polhena. It stands on the beach front since 1970s. Today however there are a couple of other new hotels around Polhena, including one of the 5-star category. A lot of guest houses and restaurants too are available around the Reef Gardens Hotel.

If you suddenly change your travel plan, or the weekend plan and came to Polhena beach, there is nothing to worry. Everything you need to have fun in the sea beach; Bathing trunks, goggles, snorkels, inflated tubes for floating, snacks, and cool drinks; are available at the beach itself. You can even go on a motorboat ride alongside the reef in a boat operated by a boat riding service. If you are interested in having a beer at the waterfront, you can do it at a nearby outdoor restaurant. Bathing in the sea after liquor is extremely dangerous. Many paid the price by their lives here in doing so.

The sea between the shore and Polhena reef is shallow, and within the standing depth. Sunshine falls all the way to the sea bed, and this is best for snorkeling. The water level is even lesser at low tide everyday, and between November-January months of the year. If you have a set of snorkels you are privileged to see the colourful world of the Polhena reef. It is vibrant with the highly contrasting colours of purple, green, orange, red and yellow on the backdrop of corals and shining sand of the sea bed on a good sunshiny day. The ripples on the water surface makes patterns of sunshine on the sea bed which makes the realistic adventure of snorkeling more like a dream. Polhena reef is home to a number of marine species including some colourful reef fish, colourful corals, urchins, starfish, sea cucumbers, etc.

Polhena reef is huge. Early in the morning, between 7-8 am the tide is low, so anyone can just walk up to the reef. In low tide, the depth of the sea near the reef is less than an average man's height. Those who walk up to the reef can get on to it. Polhena reef is just like a vast concrete slab laid in the middle of the sea. Sea sand has got collected within the spaces between the dead coral, and seaweed has grown over it to make the top of the reef flat and smooth to the barefoot. In my schooldays I used to come here on to the top of Polhena reef with my friends and play football with them, until the tide starts going up. Although the sea on the shore-side of the reef is shallow, the ocean-side of it is very deep. Therefore it is advisable to be extremely careful not to walk too far on the reef.

When the Tsunami hit the southern coast of Sri Lanka in 2004, rocks and sand aroused by the destructive sea waves were thrown over the reef to the shore. This has made the bathing area even shallower today. Therefore, bathing at Polhena has become more fun for children and adults alike.