The world's most damaged environments undeniably have an eery allure to them.

Forget the unspoiled wilderness that Eco-tourists seek out, how about checking out those environments that are ultra spoiled due to human activity such as radioactive towns, oil soaked wetlands, and valleys filled with mountains of e-waste? These types of despoiled areas are becoming more and more common and some tourists are now realizing that they make for a fascinating and certainly different type of vacations. With that, an era of a new type of tourism is upon us: pollution tourism.

There are so many ruined places around the world to choose from but I've narrow down the list below to four highly-polluted tourist gems covering different environmental issues that tourists are now beginning to discover. Let's take a look at some of some of the worst around the world.

Chernobyl and Pripyat in Ukraine

On April 26, 1986, a nuclear reactor in Chernobyl's power plant exploded, sending a plume of radiation equivalent to 400 Hiroshima bombs across Europe. Two days later, the town of Pripyat, located just under two miles away from Chernobyl and built in 1970 to house the plant's 50,000 workers and their families was evacuated. The families were never allowed to return to their homes which have become part of what's now one of the eeriest ghost towns on earth.

Today, the site of the world's worst nuclear power disaster is officially open to tourists. The Ukrainian government claims that radiation levels in parts of the 18-mile exclusion area around the plant, called the "dead zone" are returning to normal levels. In January, the government legalized tours to the dead zone and brave tourists are welcome to check out the ghost town of Pripyat and the nuclear power plants.

Tour operators are now offering day trips to the area, located just about 100 km (62 mi) from Ukraine's capital of Kiev. One-day tours which include transportation and food cost between $150 - $200. A typical itinerary to the area usually includes tours through the ghost town of Pripyat with walks through the corridors of the Palace of Culture, pre-school classrooms with toys left on the floor, a crumbling Olympic-sized pool, and gas masks abandoned by people fleeing a quarter of a century ago.

Before embarking on a radioactive adventure, visitors need to sign a waiver exempting the tour guides from any responsibility in case of any radiation-related health problems.

Interestingly, wildlife including wild horses, wild boar, wolves, deer, beavers, foxes, lynx and thousands of elk have returned to the "dead zone" and have been calling it home.

Oil sands, also referred to as tar sands are a combination of 90% clay, sand, water, and 10% bitumen (a heavy black thick oil). Techniques to get to the oil sands include strip mining, open pit, or by underground heating. Oil sands are mined and processed to get the bitumen, which is then refined into oil.

Oil sands are found in many locations around the world, however, the largest deposits are found in Canada and Venezuela. Tar sands are also found in the United States, but they're located on public lands in Utah. Canada's oil sands are open to tourists.

As an adventurous pollution tourist you can take a bus tour past northern Canada's strip mines, run by the oil sands companies themselves. On one of these tours, you can check out first hand the now barren mined land that's bringing tremendous growth and investment into Canada's oil-sands regions - Alberta, Canada. Such tours include professionally trained guided tours to an actual oil sands site. Don't wear open toe shoes!

You've probably heard of the Great Pacific Garbage Patch, also referred to as the North Pacific Gyre. It refers to the vast amount of garbage floating in the Pacific Ocean, said to be twice the size of Texas. However, did you know that you can check out the patch first-hand on a boat trip? Well, okay, it's not one of those luxury cruises but it's a scientific expedition/working cruise usually from Hawaii to Western United States, through the heart of the ocean of garbage.

One such "cruise" is sponsored by the Algalita Marine Research Institute where "tourists" help collect micro-plastic pieces and assist in hauling large items aboard. Furthermore, passengers help sail, maintain the ship and stand watch at night. I cringe thinking about things in our oceans - imagining things like refrigerators, Styrofoam, rubber duckies, and plastic bottles floating in them and sea animals eating pieces of plastic while mistaking it for food. This sort of cruise sounds really appealing to me, fulfilling my personal desire to do my part.

Every year, about 26 million pounds of plastic float from inland areas toward the the Great Pacific Garbage Patch. The floating plastic poses a huge threat to the environment because it ensd up inside of fish and can end up on your plate, and furthermore, when plastics break down in the ocean, they release chemicals that have very detrimental consequences to marine life and water quality.

Which polluted area would you want to visit most?

Technophiles would love Guiyu, China and perhaps you would too! Have you ever wondered where your old electronics end up? We'd like to think that they're disposed of properly at recycling sites but the truth is, many end up in Guiyu - aka the world's electronic graveyard to be taken apart manually by Guiyu's dwellers, even out on the streets atop mountains of electronic waste.

Guiyu is a city made up of four small villages located in Guangdong Province in southern China where over 5,500 shops, employing 1500,000 e-waste workers are in the business of dismantling electronics, recapturing whatever metals and parts they can re-use or sell. Guiyu's workers process roughly 1.5 million tons of thrown out computers, cell phones and other electronics (about 4,100 tons per day!), according to a local government site. E-waste goes to die in Guiyu, creating mountains of electronic garbage. It is the largest e-waste site on earth.

Electronics are made from material such as lead, cadmium, mercury, chromium, and polyvinyl chlorides - all of which have toxicological effects like brain damage, kidney disease, mutations, and cancers.

A major problem with the e-waste is that the a lot of the ash from the burning of plastics is dumped into Guiyu's streams and canals, poisoning groundwater. The rivers in the city flow with black water. 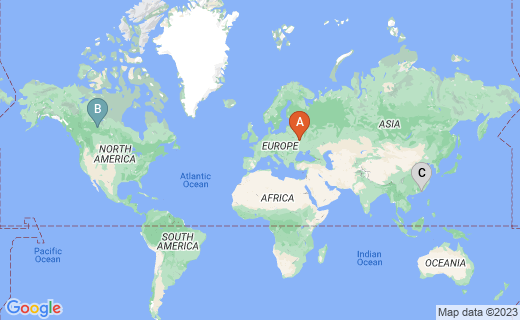