Proud Paravur with its Legendary Temples

Dawning in Carnatic Classical songs and mantras, North Paravur anchors a number of tantalizing temples upholding the rich cultural heritage of Hindus. This place senses the eternal presence of almost all Gods Lord Krishna, Lord Siva, Goddess Saraswati, Goddess Durga and so on. Abounded with the blessings of gods, North Paravur is a serene place rimmed with dwellers of all kinds of Hindu sub-castes.

North Paravur, formerly known as Parur is a town, municipality in Ernakulam district in the Indian state of Kerala. Being the gateway to Malabar, Paravur is just 17km away from Edappally in the city of Kochi. The ancient seaport Muziris is located in Pattanam village, about 3 km away from the town.

The reason for so many temples in the region is attributed to the Travancore State and Cochin State rulers who ruled North Paravur for many years. Also at different points in history, Karnataka Brahmins (Pottie, Embran etc), Tamil Brahmins (Iyers) and GSB Brahmins ( Prabhu, Shenoy, Pai etc) migrated to this town, settled here and constructed temples for their own societies.

This temple is situated facing the West, whose Eastern side is filled with Agraharas or small, Tamil Brahmin quarters. I was born and brought up in this Agrahara that is immersed fully in the old rituals and customs of Brahmin caste. Kannankulangara temple is about 600 years old and has an interesting legend behind it.

Once a sad, childless Brahmin woman came to this temple and cried to Lord Krishna. Afterwards, she gave birth to a child and this event led to the belief that Sree Krishna of Kannankulangara temple would bless all couples with a child. The tradition of tying a small cradle on the roof of this temple is still a popular custom among all the childless Hindus. Sree Krishna worshipped here is the ‘Vennakannan’ who makes his devotees speechless when decorated with sandal paste and flowers. The 10 days festival in this temple held during each year is a marvelous event filled with so many traditional and cultural programmes of Kerala.

Goddess Saraswati is being idolized in the middle of a lotus pond here. This entire serene and divine ambience creates ‘bhakti’ in each and every mind and this temple has been constructed in the same manner as ‘Devi Saraswati’ is being portrayed in pictures and stories. Worshipping her would enrich everyone with ‘Vidya and Kala’ and people visit this temple to get blessed with intelligence, knowledge and artistic skills. Sree Mookambika Temple of North Paravur also has a cool legend behind it.

Thampuran (ruler) of Paravur was a great devotee of Goddess Mookambika. He used to visit the Kollur temple in Mangalore every year to pay homage to the goddess. When he became old, his health worsened and he could no more travel to Kollur. The goddess appeared to the sad devotee in a dream and ordered him to build her idol in his vicinity for getting her eyeful sight daily. Thampuran followed her instructions and built a temple for Sree Mookambika in North Paravur. It is because of this temple that this place gave birth to so many accomplished artists in the field of music, dance and drama.

The famous annual Navarathri festival is celebrated with great fervor over ten days during the month of Kanni which falls between September and October. As ‘Devi Saraswathi’ is fond of music, concerts are held all the ten days to gratify her. Famous vocalists perform their renditions at least one day to seek her blessings. On the day of Durgashtami, children place their study books for ‘Pooja’ before Goddess Saraswathi. The day following Mahanavami is Vijayadasami. This day morning, the 'Ezhuthinirithu' or 'Vidyarambham' ceremonies are done on a special stage when thousands of children utter the word “harishree” for the first time and write it on a plate of rice. It is believed that the child may excel in his studies if his early writing starts from Sree Mookambika temple.

Built in a vast area of land, this huge temple hosts both the deities Lord Siva and Goddess Parvathy in one Srikovil. Pradosham and Sivarathri are the most important days on which special Poojas are conducted. The priest of this temple has to observe highly esteemed rites to offer prayers as Lord Shiva is associated with power and anger. Any small fault may arouse him which may lead to destruction. Not only the priest, but all the devotees are also expected to follow the rules while entering the Srikovil for worship.

Four small temples of Shri Raman, Hanuman, Shri Krishna and Ayyappa are near it. The annual festival is conducted during Medam month that falls in April and May. This rich temple conducts several cultural programmes during this period and most renowned artists are being ushered to deliver a grand treat to the god.

Under the reign of gods, Paravur town pours endless blessings upon its subjects. This serene and green land dispenses everyone the feel of god’s presence everywhere with all the divine songs and hymns flowing from these ethereal temples.

Have you visited North Paravur temples? 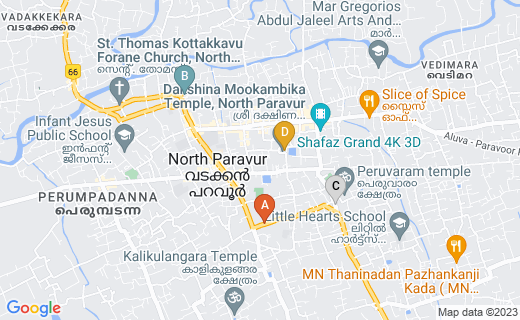 The land of temples, greenery and art.