Visiting Pushkar During the Monsoon Season

We visited Pushkar, India in August 2010 – smack in the middle of monsoon season which lasts from June until September. Monsoons conjure up images of flooding, misery, grey skies and a lot of time indoors but it doesn’t have to be so! Although it did rain nearly non-stop during the two days that we were in Pushkar, it was completely worth it. The picturesque sacred lake of Pushkar was full of water, trees were lush green, and people were roaming the streets, smiling, as if it wasn’t pouring cats and dogs.

As soon as we arrived in this sacred city for Hindus, we dropped off our bags, and rushed to rent a motorcycle so we can start exploring quickly. That’s when the rain began. At first it was just a drizzle and we thought to wait it out in the little shed where we rented the motorcycle but as time went by, the rain got heavier and heavier. Not wanting to waste time, we decided to just go for it. At that time, the water was already up to our knees!

Pushkar, a city of about 14,000 inhabitants in the Rajasthan region, is one of the most ancient cities in India and is one of the most sacred pilgrimage sites for Hindus. It is often referred to as "Tirth Raj", or the king of pilgrimage sites. In fact, a Hindu pilgrimage is considered incomplete without having a dip in the sacred lake of Pushkar. According to legend, all the gods visit Pushkar for five days every year and the lake washes away the sins of devotees. The world’s largest camel fair where around 50,000 camels are sold and raced takes place to coincide with the five holy days, which in 2012 will take place from November 20 – November 28.

Temples seem to be everywhere and astoundingly, there are 400 of them. The most significant one is the temple of Lord Brahma, one of the few in the world.

What To-Do and See in Pushkar

Pushkar, India on the Map 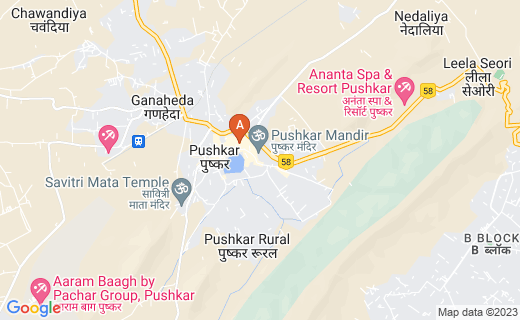