Our National Parks: Putting America Behind You on Cape Cod

Putting America Behind You on Cape Cod

It was my first visit to Cape Cod off season. After hoofing along the sands for an hour or so, I happened to look back at my receding tracks; amazingly, they were as natural as those of the shore birds as they appeared marvelously wobbly. Beyond Nauset Light blinking white and red in the misty air, I sat on a piece of driftwood for a moment or two as waves thundered in, hissing with foam, sometimes violet green in color, and pungent with brine that scented the entire beach.

Each incoming wave possessed a distinctive quality: some crested high like cobras; others rolled in sluggishly to be absorbed by larger waves which in turn were double or triple decked; still others flopped with a hollow sound and turned brown with churning sand. All waves had one thing in common. As my young daughter Michelle once said of them many years ago, they are "movelish." Their incessant movement and roar would challenge any practicing orator, Demosthenes, Daniel Webster, or New England Sachem Passaconaway included. But more than that, this giant, constantly moving sea puts humans on terms with their planet, for here we are all immediately made aware of cosmic power. As each wave thunders shoreward, it is as though a million years are erased in foam.

I arose from my driftwood and proceeded along the beach for several miles until I reached the high dunes laced with scarlet oaks. Toward the bayside of the Cape, I felt like one of those pilgrims in 1620 searching for fresh water or like Henry David Thoreau two hundred and thirty years later in search of the primal essence of the sea. Piping plovers skirted back and forth over mudflats as gulls circled like hawks above the groves of pine and oak. Strands of mist hazed the air just enough to create the feeling of French Impressionism only on a far vaster canvas. This juxtaposition of two worlds in such close proximity--stable vegetatated dunes, calm bayshore flats so close to a roaring, thundering sea front--constitutes one of the reasons why, I believe, Thoreau did (as well as Henry Beston during his year at his outermost house), confront the essential facts of life and death. Part of the Cape's essential life is the sea's indestructible wildness. Unlike forests, the sea cannot be cut down or dominated. Thoreau wrote in his book Cape Cod that,

"The Indians have left no traces on its surface, but it is the same to the

civilized man and the savage. The aspect of the shore only has changed.

The ocean is a wilderness reaching round the globe, wilder than a Bengal

jungle, and fuller of monsters washing the very wharves of our cities and

the gardens of our seaside residences. Serpents, bears, hyenas, tigers,

rapidly vanish as civilization advances, but the most populous and civilized

city cannot scare a shark far from its wharves."

And what of death? Any visitor to the Cape must confront death. The night before my trek on Marconi Beach, I checked into a small inn at North Truro on the bayside. My innkeeper said that a small whale had washed ashore the previous evening, and already its bones were bare. I hurried down to the shore in dusk to see droves of sea gulls feeding on its carcass. They flew off as I approached, and there it lay with its elegant white bones bare to the universe. All the glitter of distant Provincetown's lights could not erase the bare fact of death. These whale bones had been equalized by the sea. They were not mere bones but something more-- those lean and white bones had merged with the universe itself.

Herein lies the paradox of the sea. It furnishes us with a sense, even in death, of mergence which gives further meaning to life. The sea is indeed a totality that balances unique individuality with universal commonality. We are enabled to see life as a part of a continuum beyond life. Bone fragments help make sand.

I left the sheltered coves of the bayside to cut across the wild dunes. The roar of the surf again filled my being as I hopped down to the lower beach. Nauset Light blinked like Argos through veils of mist. As I edged my way northward, the protruding dunes of Marconi Beach ever so slowly took shape. Even though my footprints were, perhaps, as wobbly as Thoreau's, they had indeed helped put all of a computerized, space-age America behind me.

Readers may wish to familiarize themselves with Henry Thoreau's book, Cape Cod. 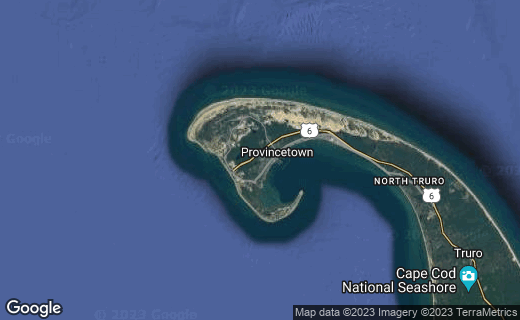