Filmed by me on our visit to the park giving just a quick view of some of the walks and scenes in the ‘Puy du Fou’ Park.

Entertainment for the Whole Family

Puy Du Fou Theme Park is a must visit on your holiday to the Vendee Coast, France.

Tickets for the day attractions is sold separately to the Cinescenie evening show, so if you want to see the evening show as well as the Theme Park during the day then make sure you buy both sets of tickets.

The Vendee Coast as part of west central France on the Atlantic Ocean is just south of Brittany so it just begins to pick up the Mediterranean weather; a warm climate with good weather and beaches.

The Puy Du Fou Theme park is well worth a visit but it's best to pre-book, especially if you wish to see the Cinescenie in the evening. The Grand Parc has a number of exhibits to explore including the medieval village and the Victorian era village with side-shows and entertainment going on throughout the day.

The main attractions during the day includes several main open-air shows run at regular intervals throughout the day, each lasting up to 40 minutes, including:-

Late in the evening, usually starting at 10:30pm is the after dark spectacular two-hour Cinescenie show that takes place in the open-air with over 1000 actors taking part. This event is separate from the main day activities and requires its own ticket for entry. I would advise anyone wishing to stay on in the evening (after spending the day at Puy du Fou) to pre-book the show well in advance; due to its popularity the tickets are usually sold out almost as soon as they become available on the official Puy du Fou website.

Cinescenie tells the story of the counter-revolution in the Vendée region of France during the French Revolution from 1793 to 1796; resulting in a French Republican Victory. 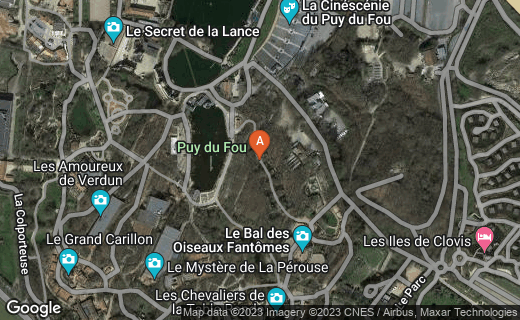 Fantastic Theme Park in the Vendee, France, so much to see that you really need to spend two days there; and the two hour night show is spectacular.

Our Visits to Puy Du Fou

Just an hour drive inland from the coast Puy Du Fou is a must visit. Our first visit to this most fantastic theme park was just a day visit from 10:00 in the morning when they opened right through to the evening and then onto their open air nighttime show, Cinescenie which starts at 10:30 in the evening (just after dark) and goes onto until after midnight; when the temperature is still over 20C (70F).

In fact we liked the theme park so much, and one day was not enough time to see it all, we returned two years later and spent a whole two days there; even then it was a rush to see everything and we skipped the indoor water show (which we seen on our first visit) just to squeeze everything else in.

Below are some of the events we saw during our visits to this most spectacular Theme Park.

The Gladiators open air show is set in a replica of an amphitheatre that is 115 metres long and 75 metres wide and sits 6000 spectators. It recreates the atmosphere of Gaul during Roman times and is set during the time of Diocletian, when there was great unrest. The show features a traditional parade of people and animals, gladiatorial combat and chariot racing.

The Battle of the Keep at Puy du Fou

The Battle of the Keep, an open air show at Puy du Fou is based on a French Donjon in the year 1429 during the Grand Chivalry Festival when an attack by English Knights disrupts the tournament. This show features Jousting, trick-riding, horseback duels and a spectacular flame-throwing castle and other spectacular medieval armoured weapons.

The Vikings at Puy du Fou

The Vikings, another open air show at Puy du Fou, is set in a reconstructed 1000 year old fortress that is attacked by a Viking Longship. The story begins with a marriage in the village, just before the arrival of a Viking Longboat. Special effects include the emergence of a Longboat from underwater, and a saint walking on the water! Plenty of fighting, humour and in Pou Du Fou tradition, fire.

Origin and History of the Vikings

From Tribal Roots to World Domination

The Romans was an Empire that spanned Europe and beyond, the Vikings was a tribe of people that traded with and conquered land piecemeal right across Europe, and at one point even reached Newfoundland. Their fragmented yet dogmatic approach to trade and conquest has had a profound and long lasting influence on culture and society right across Europe which anyone interested in genealogy should find fascinating, especially where you find some of your ancestral roots steaming back to the Vikings of Scandinavia. Two of my main ancestral branches can be traced back to family groups that came across with the Normans in their invasion and conquest of Britain in 1066, the Normans themselves being of Viking origin each of my two family lines can be traced back further to their Viking origins prior to their migration to Normandy. And on my wife’s side she has a family line that originated from the Scandinavia Vikings in the 8th century and who settled in Suffolk, England from where they are recorded in the Domesday Book of 1086; therefore we have a keen interest in the history of the Vikings.

The War in La Vendée and th Little Chouanerrie
The story of the momentous historical account in the history of the Vendee. A Catholic led revolt in the Vendee against the peasant uprising of France during the French revolution of 1789 to 1799.
Buy Now

The Vendee coast is over 160 km and is made up of mostly sandy beaches; the sand being fine, very soft and very light in colour. This part of France has an exceptionally mild climate with plenty of day and night attractions including popular resorts such as Les Sables-d'Olonne, La Tranche-sur-Mer and Saint-Jean-de-Monts.

Due to the exceptional mild climate during the summer months there are always plenty of night open-air shows such as fireworks displays, medieval festivals and the parade of boats. Many of these shows start after 8pm and go onto midnight when the temperature is still 20 Celsius (70F).

Inland, the chief attractions include the Marais Poitevin (an area of marshlands famed for wildlife), the forested area around the village of Mervent, the rolling countryside of the Bocage and the historical theme park at the Puy du Fou.

Evening Entertainment and Open-Air Shows in the Vendee

Keep An Eye Open for the Local 'What's On' Posters

Every year we go to France we head for the Vendee coast, and when we get there we look for the local attractions for the week; especially the open-air evening shows and festivals which are always spectacular.

The evening open air shows are popular because it’s the cooler part of the day, and many of them go on until midnight when it’s still 20C (70F).

We might not speak French and therefore may not be able to understand the words but the actions speak for themselves, and we are never disappointed.

Day trips in the Vendee and surrounding area are never a disappointment:-

Then, on the journey back to England, time permitting, Le Mont-Saint-Michel in Northern France is always worth a day visit.

I holiday in France

Mr. Bean's Holiday (Widescreen Edition)
If you are a fan of Mr Bean you will love this movie of Mr Bean on holiday in France. One of the best movies made by the lovable Mr Bean. The story line is touching and funny, and as usual Mr Bean gets himself into many fixes but as always seems, by his naivety, to come out the other end with an innocent fate of fortune.
Buy Now