Pyramids of Tenerife and the Canary Islands

The mystery of the Tenerife pyramids

The word "pyramid" usually brings to mind Egypt but in actuality pyramids are found all over the world. There are many on Tenerife in the Canary Islands, although many a holidaymaker there never get to see them.

There is a real mystery about the pyramids of the island because the university academics do not want to acknowledge their reality it seems, whilst other people who know about them, believe these constructions were made by the Guanches, who were the original islanders, or perhaps by some other ocean-going race of people.

The pyramid complex in the town of Güímar, in the south of the island, has had all the attention and publicity. This is because the world-famous explorer the late Thor Heyerdahl had declared that the pyramids there were authentic ones of the stepped variety that he had seen elsewhere on his travels to other countries. So impressed was he that he set up home in Güímar with his wife and lived the last decade of his life there.

Heyerdahl had befriended shipping magnate Fred Olsen, who was willing to fund the creation of what is now known as the Ethnographic Park around the pyramids of Güímar. The park is a tourist attraction for those who find out about it, and it offers an exhibition centre, an auditorium where a film is shown about pyramids of the world, a restaurant and a shop. It generates a lot of publicity for the Tenerife pyramids in the town.

What is significant about this is that these pyramids were on land that was going to be developed, and it was believed, until Heyerdahl stepped into the picture, that they were just large heaps of stones and agricultural terraces that had been created by farmers and previous landowners.

This doesn't make much sense because the pyramids are built showing careful design in their structure. They are, as Heyerdahl observed, similar to other stepped pyrmids found in other parts of the world. He theorised that there was once a culture of people who travelled across the oceans on rafts like the Kon-tiki one that he was famous for having built and used, and that these people also made pyramids. Perhaps the Guanches were such a race of people, or perhaps they were visited by those who did these things? 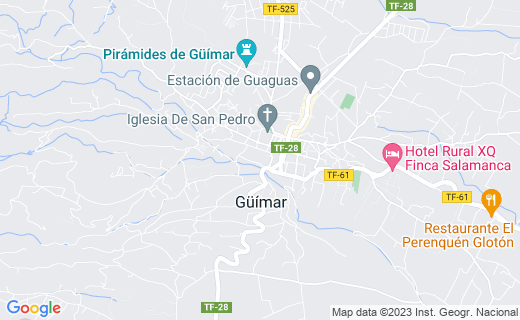 Pyramids of the north of Tenerife

Although it has never been proved for sure who the builders of the pyramids of Güímar were or when they were made, they do at least get talked about and viewed. In the north of the island there are many more pyramids, some of which easily rival the Güímar ones for size and evidence of design, but they are more or less ignored by nearly everyone.

This is because they have no special park and visitor's centre around them and they have no stamp of approval by a world-famous explorer. There are pyramids in the Icod de los Vinos area near the village of San Marcos, on a stretch of road known as La Suerte. One of these is on a banana plantation and in good condition but the other further along the same road has been neglected and has weeds and scrub growing all over it and stonework that has crumbled away.

It is known that there were more pyramids in the Puerto de la Cruz and La Orotava areas but they have been destroyed by developments. It seems such a shame that such an interesting part of Tenerife's history has been allowed to be built all over and called nothing more than "piles of stones."

In the neighbouring island of La Palma there is a pyramid, and also on the island of Sicily in the Mediterranean there are more of these constructions.

That the Guanches used to live in all the areas where pyramids are located in Tenerife is not disputed so it is difficult to understand why they cannot be credited with having built them. Even more so, when we consider that knowledge of the pyramid as a geometric shape was obviously known to these people, as is shown in a pintadera design of Guanche origin. It is thought that these pintaderas, were used as stamping tools to paint the body with.

American author Gordon Kennedy has a new book out entitled The White Indians of Nivaria, which is about the Guanches. From the writer's research into the history of the island as told by the Spanish chroniclers, he has concluded that the Guanches were a pyramid-building people.

Author Philip Coppens is in agreement with this and visited the island in Februray 2009 when he examined many of the pyramids. Philip has written at length about his discoveries on his website, which is included in the links below.

Whilst some members of the academic community are still unwilling to accept that pyramids could have been built by the Guanches the debate about them continues.