Queenstown, located in the southwest corner of New Zealand, draws around 1.7 million visitors each year. They are drawn here to experience some of the awe-inspiring peaks of the Southern Alps, the search for adventure, a desire for a relaxing holiday to rejuvenate after working hard throughout the year or just to breathe pure mountain air while skiing down the slopes of the Remarkables Mountain range. It is a premier alpine resort that has something on offer all the seasons of the year. There are events happening all through the year such as music festivals, spring and winter festivals, skiing and snowboarding competitions and 100% New Zealand winter games.

A unique experience to Queenstown is the TSS Earnslaw Steamship Cruise on what is believed to be the oldest working coal-fired steamship in the southern hemisphere. The ship is celebrating its 100th birthday this year, having been launched in October 1912.

Queenstown is the world's southernmost wine-producing region and has won many awards. It is well-known for its local pinot noir and other wines such as rieslings, pinot gris, chardonnays which can be sampled in a novel store in downtown Queenstown. 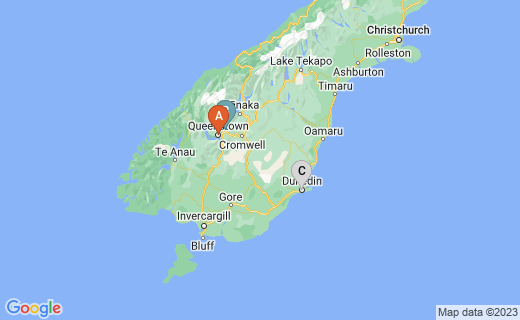 A Brief History of Queenstown

Queenstown is a town that developed on the shores of Lake Wakatipu with the Remarkables Mountain range forming a stunning backdrop. It flourished in the mid-1800s during the gold rush in nearby Arrowtown. Before the arrival of the European settlers, the Maori led expeditions into the region in search of food and pounamu or native greenstone. After the Maori came the farmers, gold miners, adventurers, filmmakers and wine makers and their activities continue to this day.

It was with the discovery of gold that that commercial shipping began on Lake Wakatipu and the only remaining steamship from that period is the TSS Earnslaw. It makes several trips daily to the Walter Peak High Country Farm of which the original homestead was built in 1908. You can gain a fascinating insight into Queenstown's rich pioneering history whein you take the Walter Peak Heritage Excursion.

New Zealand offers many adventure activities in many of its tourist destinations such as white water rafting, bungy jumping, skiing, snowboarding, heli-jumping, etc. The beautiful snow areas cater to every level of skier or snowboarder and great instructors. For example, the Remarkables are home to three sunny, sheltered bowls for skiing.

Queenstown, too, has many such activities on offer all the year round. However, there are some things that are unique to each of these destinations. In the case of Queenstown it is the TSS Earnslaw Steamship Cruise on a 100 year old iconic vintage ship.

The TSS Earnslaw was launched in October 1912 and is the largest and grandest vessel ever to ply Lake Wakatipu. Taking a trip on the TSS Earnslaw is an experience that is unforgettable, it is like travelling back in time. The coal is loaded on to the ship before it sets sail and passengers are then invited to board the ship. Everywhere you look is stunning scenery and the ship sails on the still waters of the lake skimming like a bird. Sea gulls follow the ship as it goes on its journey to the Walter Peak High Country Farm.

There is plenty of time to relax on board, explore the engine room, say hello to the captain on the bridge or just have a coffee and cake at the Promenade Cafe. Those interested in learning more about the ship's history can take a look at the collection of historic photos in the Fo'c'sle gallery.

As one gets closer to Walter Peak mountain range you get the first glimpse of the Walter Peak High Country Farm with its red roofs and beautiful garden. There is a choice to either stay on the ship or disembark for an experience of farming life. The farm is situated on the south-western shores of Lake Wakatipu with the stately Colonel's Homestead and extensive lakeside gardens.

There are many options if you choose to spend time here such as farm excursions, horse treks, guided cycling and Walter Peak Heritage excursions. The Colonel's Homestead offers traditional morning or afternoon tea, barbecue lunches if pre-booked and also evening dining. Vegetarians are also well catered for at the homestead restaurant. After a relaxing or adventurous time you can head back to Queenstown again on the TSS Earnslaw.

Queenstown is in the South Island of New Zealand and the nearest city is Dunedin. There is a Queenstown International Airport well served by the major airlines and direct flights are available all the year round from Sydney, Brisbane, Melbourne and the Gold Coast.

Domestic airlines have several connections each day from New Zealand's main cities. One can also drive to Queenstown or take a scenic coach tour. Queenstown is 487kms from Christchurch, 281kms from Dunedin and 189kms from Invercargill.

Getting around the downtown area is best done by foot with all the boutique shops, restaurants, cafes all in walking distance. Breathtaking views are never more than a few paces away and it is a pleasure just to amble around at your own leisure. It also has an active night life.

A visit to Queenstown is a must for nature lovers, adventure buffs and everyone else with a huge range of activities for all abilities. A couple of days is not enough to experience Queenstown, a week-long holiday would be ideal.