Follow the Charles Bulsstraat, the most shameful touristic shopping street in Brussels, where you can buy your Belgian chocolate and souvenirs. Eventually, you're only a few street from Grote Markt, facing Manneken Pis.

TheVilla Empain holds a very special place on the cultural map of Brussels. Louis Empain, the son of influential Belgian businessman Edouard Empain, was only 22 years old when he initiated the construction of the villa. The building, combining the austere Bauhaus style with elements of Art Deco, was designed by Swiss architect Michel Polak.

A philanthropist, Louis Empain offered the villa to the Kingdom of Belgium as a gift in 1937, in the hope that it would become the Royal Museum of Contemporary Decorative Arts. The Second World War put an end to this plan, and the fate of the villa was a strange one – it even became the Soviet embassy for a time. During the 1960's, it was returned to the Empain family, which then sold it to a tobacco manufacturer of Armenian descent, who in turn rented it out to a Luxembourger radio and television company.

Again resold numerous times and severely damaged, the villa was finally placed on the Brussels heritage protection list in 2001. The Villa Empain has belonged to the Boghossian Foundation since 2006 and opened to the public in 2010 after extensive restoration works. The foundation was founded by a family of Lebanese-Armenian jewelers and is devoted to the confluence of Western and Eastern cultures. The villa is a destination in itself, but it also hosts diverse exhibitions.

Not far from Mini-Europe and also in the city center is the Atomium, an odd-looking futuristic construction consisting of nine stainless-steel clad spheres that are all interconnected by passageways. The structure forms the shape of a unit cell in an iron crystal and represents humanity’s faith in scientific progress, which was the theme of the Expo world fair in 1958.

Five of the Atomium’s spheres are currently open to the public, featuring exhibitions and multimedia installations. One sphere is reserved for children, with workshops and even a place where schoolchildren can spend the night. Kids love the colorfully lit-up escalators and glass-floored elevator. By the way, the impressive structure provides an unbeatable panoramic view of Brussels.

The Maison du Roi (Het Broodhuis) is larger and darker compared to the other guild house on the Grote Markt. It's also built later, in 1873. But this doesn't make the building less impressive.

It has Neo-Gothic arcades and green-copper statues. Bread was sold here in the Middle Ages, but now it houses the City Museum of Brussels. On display are old maps, architectural relics and paintings.

The main attraction is a painting by Jan Brueghel de Oude from 1567, Cortège de Noces (The Wedding Procession).

A flea market is held in the traditional Marolles quarter every day between 7.00 and 14.00. Saturday is the most entertaining day to go. It offers a brightly colored mix of clothing, Art Deco objects, old furniture, oriental pictures, Chinese vases and industrial lamps.

The prices are mostly fair, and it is a true delight to stroll through this café-encircled flea market. And afterwards, you simply must continue your perambulations along the nearby Rue Blaes and Rue Haut.

Have A Laugh At The Comic Centre

Comics are probably the best-known symbol of Belgian culture. Some of the most famous cartoons of the 20th century, including Tintin and the Smurfs, were born here.

When visiting Brussels, take time to explore the Belgian Comic Strip Center, a place that honors the creators of the so-called ‘ninth art’.

Discover more about the history of comic strips in Europe and explore the work of contemporary illustrators as well as legendary creators such as Hergé (1907–1983) and Peyo (1928–1992), the pioneers of Belgian comics 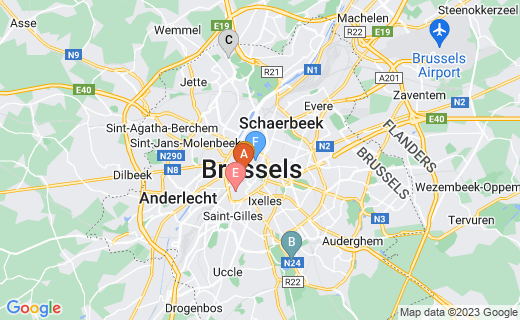