For the letter Q of the people from Africa that I have been sharing in order alphabetic; I will share the Quioco people also known as Chokwe.

It is very interesting the fact of how the names are changed by their linguistic formations. This tribe name (as many others) has several ways of spelling and pronouncing. For this tribe the variant for their name is spelled: Ciokwe, or Cokwe. The pronunciation will also be Tchokwe. They are also known as Baiokwe and Badiok.

Who are the Quioco / Chokwe people?

The Quioco / Chokwe are Bantu-speaking people. These people are a mixture of many aboriginal peoples and conquering groups of Lunda origin. Their origin has been traced to the Mbundu and Mbuti Pygmies.

During the 19th century the wealth acquired from the increased trade of ivory, wax, and rubber led their kingdom to expand. The disintegration of their power was the result of the effects of expansionist, disease, and colonialism 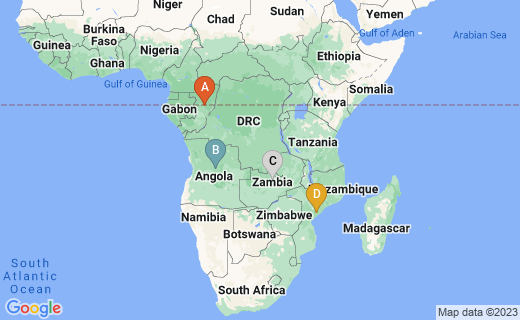 Where are the Quioco / Chokwe people from?

The Quioco / Chokwe people inhabit the Southwestern part of Africa in: the Southern part of Congo from the Kwango River to the Lualaba: Northeastern Angola. Since 1920, they live in the Northwestern corner of Zambia and now also living in Mozambique.

How do the Quioco / Chokwe people live?

I will list in this section some interesting facts of the way the Quioco / Chokwe people live.

How do the Quioco / Chokwe people communicate?

The Quioco / Chokwe people communicate with a language known as Wuchokwe, also identified as their name Chokwe. This language belongs to the Benue-Congo branch of the Niger-Congo languages.

Many of them speak their country's official language:

How do the Quioco / Chokwe people survive?

The Quioco / Chokwe people, as all of us, have identifiable characteristic marked by each culture. I will list some of :

We, the people are totally interesting creations of God. In the African people, this creation is distinguished very clear in my heart. Writing this hub, in my search, a mystery of one of my African collection was uncovered. The photo to the side is an art given to me, but I was unable to know from where it originated from. Now with no doubt I know that I have an art from the Quioco / Chokwe people.

Nine more African people are on the way in this series. I think it is such an enjoyment to expand our neighboring acknowledgments. You are welcome to visit Lastheart's HubPages to find out about them.