While there are campgrounds inside Las Vegas, there aren't a great number of them and most are quite a ways from the strip, which is where most visitors want to be.

In our case, we had purchased a new (to us) RV online from a dealer in Phoenix and the road home to Boise, Id. took us through Las Vegas. Never having visited we wanted to spend a couple of days there, taking in the sights of the strip and sampling one or two of the famous buffet dinners.

Unfamiliar with the city, we didn't want to drive a motorhome everywhere we went and were unsure of how to use the bus system - that meant we needed an RV park as close to the strip as possible and the KOA at Circus Circus is the only one that met that need. Other reviews were not stellar, but we decided to try it anyway and booked reservations for a two night stay. 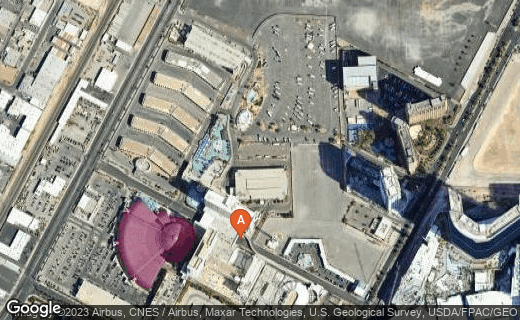 The campground can be seen on the satellite map, tucked behind the motel.

The KOA at Circus Circus in Las Vegas

We arrived in early afternoon, but had a little trouble finding the campground. Our tablet based GPS got us to Las Vegas, and to the Circus Circus casino, but didn't know just where the KOA campground was and that isn't a particularly good thing when navigating a motorhome through the streets and traffic of a large city. The campground is tucked away across a side street from the casino and we nearly missed it entirely; signage could be improved on, particularly with a sign on the strip itself pointing the right direction.

Pulling into the campground we found two rigs ahead of us, but it took only a few minutes to check in and get directions to our assigned campsite, which was easy enough to find. Parking at the campground store, where we checked in, was very limited and a little more room might help as we had to leave the RV blocking some of the campground roads while we went inside.

The campsite we were assigned to was very nearly level and with a firm surface that handled the jacks without problem. Of course it was; the entire area is a giant paved parking lot with the only soil being in small strips where the hookups are located. This was a major change for us as we do not generally stay in RV parks, but in heavily wooded areas in forest settings with actual campsites that are intended to be enjoyed rather than simply a place to park the RV. It was not unexpected, however; we knew about the extensive paving and we were in downtown Las Vegas, after all.

Hookups were well placed and easy enough to connect to. Although there would have been just enough room to extend our awnings, we didn't bother as we had not tried to take chairs with us on the flight to pick up the motorhome. There was no picnic table or fire pit; visitors are expected to spend their time either in the casino or inside the RV. That's probably reasonable, considering the location, but was certainly a change for us even though we intended to do just that and spend time "camping" only at night and in bed.

With the RV set up we crossed the street to the Circus Circus buffet - we had traveled through lunch and were hungry. The next day was to find us at the Mirage buffet, but for the moment finding something, nearly anything, to eat was more important than checking out either the Las Vegas strip or the amenities of the campground. Both would wait until the next day.

Campground Amenities and Our Impressions of Them

Although the campground had little in the way of activities such as horseshoe pits, volleyball nets or craft sessions, it did provide some minimal entertainment.

Although we never saw anyone in it (even Las Vegas is a little chilly in November) there is a small pool that was open and clean, with lawn chairs set up for those wanting to get away from the busy casinos for an hour or two.

A small playground for younger children is available, and is in a pleasant setting with some trees and shrubbery. It seems aimed at children in the 7 or 8 year old group or younger, though, and older children will likely quickly become bored.

A camping store is on site (where we checked in) and offered a reasonably good selection of both RV items (water or sewer hoses, for example) and groceries. The grocery list is limited, of course, with all the restaurants just across the street at the casino. Staff was very helpful in getting us set up with bus tickets and maps of the area and that was much appreciated.

The restrooms and shower rooms in the campground were clean and well appointed, although limited in number. Reasonable, as most of the "campers" have their own facilities and will use them rather than walk to one. Several dumpsters were also provided around the area, and there were enough that it wasn't a problem to find one. There was no garbage pickup - you will have to dump it yourself in one of the dumpsters.

The campground was remarkably quiet. With no grassy areas outside of the playground there were no children laughing and running. With full hookups everywhere, there is no reason to run a generator at any time. No one wants to tie their dog outside on the pavement, so there were no dogs barking or growling at passers-by. I never saw a quiet hours sign, but there was no need for one, either. Although I don't like a barking dog in the next campsite, I would have preferred to hear a few children having a good time.

We had no trouble walking through the campground to the store or exit as most of the campsites were empty, but I could see where that might be a problem with all the sites being full and "cutting through" an occupied campsite is always frowned on.

As a campground, the KOA in Las Vegas is a flop. Although quite expensive (at $45 it is the most I've ever paid for a campsite) it has little to offer to campers. Bare pavement is not particularly pleasant and there is virtually nothing to do in the campground. Clean and quiet, I would still give it rating of only 2 stars.

That isn't really a fair assessment, though. This KOA is really an RV park, not a campground. It is located in the heart of Las Vegas, and if you are looking for a tree covered mountain trail with deer and rabbits instead of the concrete and pavement of the Las Vegas strip you are in the wrong place. As a spot to park your mobile motel room it rates much higher, and I would give the Las Vegas RV park at Circus Circus a rating of 4 stars out of five. Location is a major plus in this setting, the park offered every amenity we wanted and personnel were pleasant and helpful. Cost is high and, in the summertime with a longer stay, I would have appreciated a better pool area but for us on this trip the campground offered everything we wanted.