Most everyone is familiar with Franklin's major downtown revitalization program that has turned their crumbling business district into a tourist attraction dubbed "America's favorite main street" but what about those real small towns where a growth population isn't occurring just one block over? It is there you will find small town life at its most authentic.

Where Tennessee State Routes 82 and 269 cross sits Bell Buckle. Population 500, give or take.

For more information and a schedule of events, visit www.townofbellbuckle.com

Normandy was established in 1852 as a railroad town on the old Nashville & Chattanooga Railroad Line later the Nashville, Chattanooga, & St. Louis Railroad.

Today the population of this little town is 141. The Normandy business district is on the list of National Historical Places.

Leipers Fork, sitting along the Natchez Trace, was originally Hillsboro but when a post office was established in the community in 1818, they discovered the name had already been taken by a Coffee County community.. So Leiper's Fork it was; named for either Hugh Leiper, a land surveyor in earlier times or Captain James Leiper who died in the Battle against f the Bluffs at Fort Nashborough in 1781.

As of this writing, approximately 650 people live in this quaint village filled with antique shops, handcrafted boutiques, historical homes, and dining.

Founded in 1809 and, during portions of the Civil War, was once an Alabama city. Today it's best know by bass fishmen worldwide as a fishing hot spot thanks to the TVA reservoir and lake and state park known as Tims Ford.

Of course Tennessee's oldest town is going to be on this list!

Jonesborough was founded 17 years before Tennessee became a state, placing it in the jurisdiction of North Carolina. The town is named for Willie Jones, a late US Senate who had supported North Carolina's westward expansion.

There are plenty of historical homes, unique handcrafted boutiques, and antique shops in Jonesborough littered among offices filled with attorneys, bankers, and the sorts. To see all this charming old town offers, visit www.historicjonesborough.com.

Rugby was a late 1700s utopian community expermint. The expirment was abandoned but the colony of Rugby was not.

Today, the entire village of Rugby serves as a tourist attraction complete with llocal lodging, dining, Victorian galas, car shows, and festivals as part of a state park.

Although there are many Greenville's in America, there is only one Greeneville and it can be found in the hills of Tennessee.

Part of Tennessee's "tri-cities" region, Greeneville was the homeplace of the late President Andrew Johnson who spent his years before the White House as a well-respected tailor of the area.

A lot of folks are familiar with Jack Daniel's but few are acquainted with his hometown and where his distillery remains in operation to this day.

Nestled in the foothills of the Appalachian Mountains is Sweetwater, Tennessee, home of The Lost Sea cave.

As the area is filled with rich American primitive history, it's no surprise Sweetwater focuses on those same attributes in revitalizing their downtown.

For a list of scheduled events and more information, visit www.visitsweetwater.com.

At first glance, you wouldn't think there is much to do in outside of strolling the streets of this recently revived historical downtown district but McMinnville has a lot to offer it's guests. Visit www.mainstreetmcminnville.org for more information. 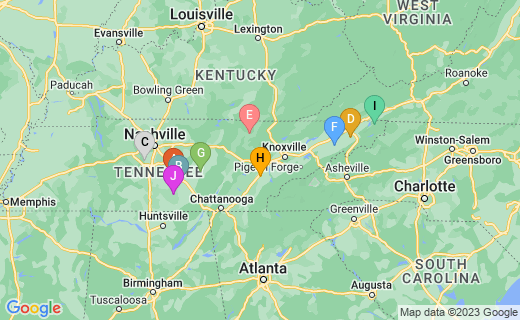