Jo Miller is a long time resident of Tennessee and frequent traveler to places near and far.

Road Trip, Anyone? A Unique Travel Experience in Tennessee

Highway 52 that runs across the northern part of Tennessee is listed as a scenic highway on maps. I travel Highway 52 often because it's very near my home, but I'm still impressed by how lovely it is. It's lovely in the spring when the redbuds and dogwoods are blooming, and it's lovely in the autumn when the leaves begin to turn.

This highway near my home is part of The Ring of Fire Trail in Tennessee, one of 16 such scenic trails across the state that have been developed by the Tennessee Department of Tourism.

I love to travel, but I'm not a fan of group tours. I've been on a few of these and they usually take you to the main tourist sites in a region where you stop for a brief tour and make the obligatory stop at a souvenir shop. And then you move on to the next tourist stop. I much prefer to plan my own agenda. In addition to seeing some of the main tourists sites, I also like to get off the beaten path and see some of the lesser known sites, experience the local culture, and sample local cuisine.

If I were not a resident of Tennessee and traveling here from out of state or out of the country, The Ring of Fire Trail in Tennessee is just the type of tourist attraction I would love to visit.. If you came to Tennessee on a tour you probably would not visit most of the sites on this tour. And even though I am a resident of Tennessee and live just a few miles off this trail, I still haven't visited all of the sites, some of them just a few miles from my home which.

Winding through Tennessee, out of Nashville and up along the Cumberland Plateau and back to Nashville, the Ring of Fire Trail is 334 miles long. It includes 112 historical sites, some holes-in-the-wall, eateries, farms and parks.

If you start your tour in Nashville, a great place to start would be the Ryman Auditorium, the mother church of country music. I was living in Nashville in the late '60s and early '70s and have very fond memories of this place. A friend had made reservations for us to attend the Opry on the night my fiance and I decided to elope. Johnny Cash taped his television show there from 1969 to 1971 and I stood in line in the snow and cold once to get us tickets to hear Arlo Guthrie.

But the Ryman only had a seating capacity of 3000 and was falling into disrepair, so in 1974 the owners decided to build a bigger, better building and move the Opry out of downtown Nashville. I've never been to the new building. I'm sure it's very nice.

In recent years the Ryman has been restored, and you can still see amazing performances there. The acoustics are great and there's not a bad seat in the house. I saw Arlo Guthrie there in the past few years. When he returned to perform in Nashville, this was the venue he choose. And I saw Joan Baez recently on her final tour.

A trip to the Ryman, in my opinion, would not be complete without a stop after the show at the nearby Tootsie's Orchid Lounge. This bar, though not one of the stops on the trail, is still worth a visit. It is located behind the Ryman and has a long history associated with the that site. Stars and fans would come here to hang out after shows when the Grand Ole Opry was still at the Ryman. It's a tiny bar but has a small stage and still hosts performers as it did in the past.

Just north of Nashville in Hendersonville you can visit Johnny Cash's tomb and eat at his favorite barbeque restaurant.

In 1816, over forty years before the Civil War, a slave owner named Virginia Hill, bought 2000 hilly acres in Clay County, Tennessee. She then freed her slaves and tuned the property over to them. This community, Free Hill, is one of many rural areas to visit along the Ring of Fire Trail. Not much is left of the original community now that once had as many as 300 residents. About 50 descendants of the original settlers remain in the area, and the original school built by the Rosenwald fund has been restored. You can still visit this historic site on the trail.

Just outside of Celina you can find wonderful soul food at Ollie's Place, A Little Taste of Soul, run by one of the descendants of the original group of settlers..

In the early 19th century John Bell bought a farm and moved his family to this area, settling in the Red River valley. After moving to this farm, the family began hearing mysterious sounds in and around their home. The manifestations continued and became legend in the area. When the 'witch' finally vanished she was said to have taken up residence in this cave on the Bell property.

Today you can visit the cave to see for yourself if there are any manifestations of the Bell Witch. And afterward you can take a canoe trip on the Red River, also a site on the trail. 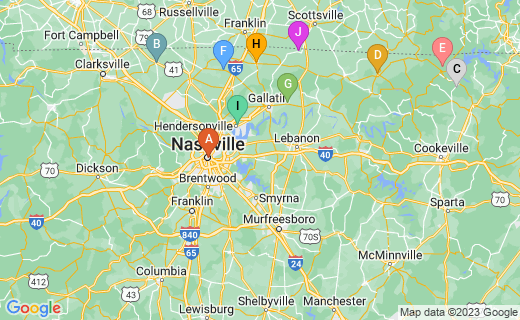 Get Your Flu Shot and an Award-Winning Cheeseburger in One Stop.

We regularly go through the small, picturesque town of Cross Plains, Tennessee. Established in early 19th century, this small town is one of the oldest settlements in the area. Many of the older buildings have been restored and it is a very attractive small town. One of the restored buildings is a business called Thomas Drugs established in 1915. You can still get a flu shot here but you can also get one of their renowned cheeseburgers at the lunch counter.

This is just one of many places along this tourist route where you can sample the local cuisine. If a drugstore is not idea of a great place to eat, how about a grocery store, like the one at Pleasant Shade. Here you can find delicious catfish or ribs and hear bluegrass music on Saturday night. If inclined, you can participate in the show.

Relax and Have Fun in Tennessee's Hideaways

Much of this trail winds through rural areas where you can visit Civil War Sites, wineries, farms, and open air markets. You can hike, swim or fish in state parks then spend the night at Armour's Hotel in Red Boiling Springs where you can bathe in the legendary healing waters of the mineral baths just like customers did back in the early 1900's.