Rome is one of the biggest cities in European Union. It has around 2.5 million population and lies around river Tiber and seven hills. These hills are Palation, Aventino, Capitol, Quirinale, Viminale, Esquilino and Celio. In the western part of the city lies the smallest independent country in the world Vatican. Vatican is the headquarters of Roman Catholic Church. Rome covers an area of 1285 square kilometers and it has 2200 inhabitants per square kilometer.

In Rome you will find four different transportation networks.

Buses are the slowest way to get from point A to point B but there is a big network of them. You will be able to come almost everywhere you want. Travelling with bus is not really comfortable because they are usually overcrowded. You will probably have to stand on the bus. For planning your route with bus try using ATAC route planner. Click here to go to ATAC route planner.

Rome’s tram network is not so big. It has six different routes mainly in the eastern part of the city. Trams are faster and less crowded than buses. If possible rather take tram than bus.

Metro in Rome is referred as “Metropolitana”. It has two lines and it is definitely the quickest way to travel through Rome. With only two lines you will have to be extremely lucky to get where you want only by underground railway. Probably combination of more networks will be required. “Metropolitana” is quick but can be really crowded. You should also keep your things close because of the pick pockets. It’s not rare that trains are so crowded you actually can’t embark the train.

City railways are quick and not so crowded. If you are taking longer trips (up to 30 kilometers) you should go by city railways. Here you have to be careful that metro ticket is enough and no additional payments are required.

Ticket is valid for 100 minutes anywhere in Rome on city buses, non urban buses, trams and urban trains. With this ticket only one trip on underground railway is allowed. Also only one trip with second-class train is allowed. This means that if you use ticket for “Metropolitana” or city railways it’s not valid anymore. You also can’t take bus or tram and then go to the “Metropolitana” or city railways.

It is valid for three days on all public transport services within the metropolitan area of Rome.

Weekly Ticket is valid for seven days on all public transport services within the metropolitan area of Rome.

I advise you to avoid buying 100 minute ticket because public transportation is slow, really slow. To come from one part of the city to the other part of the city it can take you up to two hours. And it would be magic that you wouldn’t have to switch lines to complete your route. BIG, BTI and CIS are the best option if you are doing sightseeing in Rome or staying in Rome for more than one day.

The best way to buy ticket is at the automated ticket machine. Ticket machines support around five languages, English included. They support payments with coins, notes and credit card. But not every machine will work properly. The best way to get ticket is to have coins with you. These machines are not at every stop. You will find many of them at the main train station “Termini”. If you don’t find ticket machine then you can buy tickets at tobacco stores. Tobacco stores have signs “Tabaccheria”. 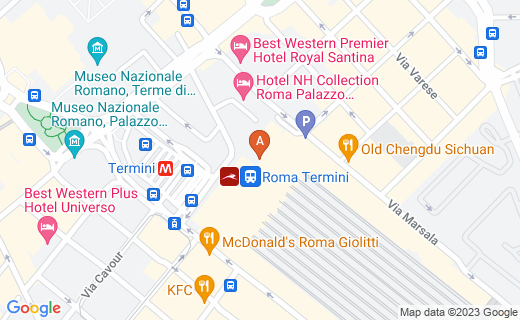 How to validate your ticket

How to plan your route

Otherwise you can use maps bellow. I advise you to check stops on the map bellow with stops on Google maps. That will give you better orientation. Remember Rome is hard city for orientation.

Rome is a big city so prepare yourself it will be crowded almost wherever you go. Means of public transportation are no exception. Watch on your things because you can be pickpocket magnet quickly. Have your things in your pockets which are hard to reach. Do not let others to help you with your luggage. If you are wearing backpack ensure that you do not have expensive things in it. Otherwise I think Rome is not as dangerous as people are saying. Take care of your things and you will be okay.