The Royal Elephant National Museum (Chang* Ton Museum) is one of Bangkok, Thailands lesser known secrets. It is located just across the road from Dusit Zoo within the lush and well maintained grounds of Dusit Palace.

The actual museum is located within two well preserved buildings which were former elephant stables. These were built to house a progression of Royal White Elephants in the early 1900s. There were periods when the building was unoccuppied as in 1959 which was when the last animal moved in. This remained till 1966 before moving over to Dusit Zoo. The stables moved over to becoming a museum in 1988. The current Royal elephants themselves are housed in another location.

The Museum is located on U-Thong Nai Road and it is easy to find. Being only a stones throw from government buildings this is a sensitive area and there many approachable and knowledgeable military around. You really could not get lost.

The two 'elephant stable' museums are very close to each other and each supervised by a friendly and informed superintendant.

You are expected to leave your footwear outside the door and no photography is allowed inside. These two buildings are more than a standard museum they are almost temples in their own right. It would also be truer to say that they were devoted to White Elephants and the culture, fact and fable surrounding these as it applies to Royalty. White was the colour of Thai Royal Elephants.

In the second building there is a statue of a white monkey and a white crow below which there is a lable which states "...these animals should be born for support the king's mysterious power".

I have visited a few elephant museums. The one in Bangkok Safari World is a waste of time but the one in Bali Marine and Safari Park is quite good. The Royal Bangkok Elephant Museum is distinctly different dealing as it does with a 'niche' area of interest within the discipline.

Here you will find a Statue of the supreme master of the mahouts along with mahout amulets and magic knives. There are statues of Ganesh along with elephant and tiger teeth. A finely polished Rhino horn too.

There are colourful paintings explaining the multiple types of white elephants. The names and ranks of animals going back over many years. There are the ropes and equipment for holding and riding and photographs of ancient elephant round ups.

Just after the interesting display of ivory and elephant tail brushes and whisks is the most gruesome exhibit...the flayed skin of a white elephant stewing away in several big glass jars of discoloured preservative.

The most impressive display was that of elephant tusks. There are many small ones within the glass display cabinets but those in the centre of building one are absolutely amazing. Three pairs of huge length, each one longer than I am tall. The longest pair, which are not an even match are 257 and 290 cms long!

Although the door to the museum is now glass the original sliding closing poles are still there. Still in common use in zoos in many places around Asia.

Definitely worth a visit. Probably a nice tie in with a visit to the zoo as it is just a short distance away. 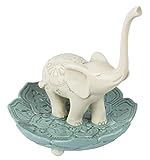