Ruiru (Kiambu County), Kenya: A Town in the Making

Ranked as the sixth largest town in Kenya, Ruiru is a town that is emerging in terms of population and economic growth. The construction of Super Thika Highway that passes along this town has put the town at a strategic position as it has led to various economic opportunities.

Ruiru envelops an area of about 292km2 constituting some areas which are part of Nairobi but receive services from the municipal council of Ruiru. The regions are Kahawa Sukari and Kahawa Wendani.

According to 1991 estimation by Kenya National Bureau of Statistics, Ruiru had a population of about 100,000 people while in the year 2005 it grew to a population of over 200,000. Currently, the population stands at over 235,000 signifying an increase in population growth mainly attributed to high migration of people from rural areas to Nairobi resulting to housing shortage in Nairobi.

Among the top ten cities and towns in the country, Ruiru is ranked as the seventh most populated region, housing more than 100,000 people. The first five are Nairobi, Kisumu, Nakuru, Eldoret and Mombasa.

Water is not a problem in this town as the main source of water supply is from boreholes as opposed to provision of water by the Municipal Council. Therefore, rationing of water does not affect a large percentage of households and if it happens, there is accessible water which can be bought from water vendors at cheaper prices. However, in Ruiru water is rarely rationed.

In fact, the Municipal Council of Ruiru supplies water to surrounding environs or smaller towns.

Ruiru is famously known as one of the top producers of coffee in the country. The coffee plantations cover a sizable land and offer employment to many Ruiru residents especially those from the lower class.

As is the case in Nairobi which is divided into three income groups, namely; the lower, middle and upper class also Ruiru contains such classes. The lower class forms a huge part of the population followed by the middle class. The upper class consists of a lower percentage.

Ruiru is well-covered by industries that have not only provided employment opportunities but have contributed to economic growth in the town. These industries have also been instrumental in renovation, construction and expansion of schools that fall within the region and general infrastructure such as roads. These industries including companies and banks are: Spinners & Spinners Ltd, Brookside Dairy Ltd, Devki Steel Mills, Bogani Industries, Devki Steel Mills Ltd, Jetlak Foods Ltd, Clay Works, Bogano Industries, Clean Star Company, National Bank of Kenya, Equity Bank of Kenya, Cooperative Bank, Kenya Commercial Bank, Family Bank and PostBank among others. 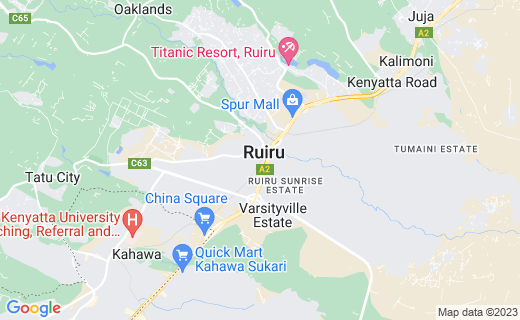 Ruiru is well-covered in terms of health services as they are easily accessible and people from surrounding towns visit these hospitals for treatment. There are three major private hospitals in Ruiru - Nazareth, Kalimoni and Ruiru Private Hospital. There is one public or government hospital, Ruiru Hospital and several small private hospitals including numerous dispensaries. The government hospital receives a high number of in-and-out patients and is a center of field attachment or internship for medical students. There are numerous pharmaceuticals that not only sell drugs but carry out general tests such as pregnancy and malaria tests.

Kenyatta University, known as a centre of research and which produces a high number of teachers than any other university in Kenya is situated 0.5km from Ruiru. The boundary between Nairobi and Ruiru starts from where the university ends towards the Ruiru side. The University has its branch in Ruiru known as Kenyatta University Ruiru Campus.

Not only does this institution accept students from around the world but also has been involved in research studies with the aim of finding ways of boosting the economic growth in the town.

As a point of fact: Ruiru houses Kenya Prisons Staff Training College which trains those who would to be prison wardens.

There are several hotels in the region. They are: Rock Beach Resort, Jobcamp Guest House, Rainbow Ruiru Resort and Spa, Overstone Park Hotel and BTL Christian International Conference centre. Ruiru Resort is by far the largest and magnificent hotel containing 130 rooms, 12 conference halls of which two of them can hold 200-500 people with the rest holding 100 of them. It has a penthouse and holds furnished apartments which total to 12.

In addition to the hotels there are numerous cafes and restaurants.

Ruiru is among other constituencies in Kiambu County at number 115 making it one of the electoral constituencies in the country. There are eight wards in Ruiru Constituency which are Biashara and Gitothua, Gatongora, Kahawa Sukari, Kahawa Wendani, Kiuu, Mwiki and Mwihoko wards.

Ruiru is expected to be one of the best planned and to-be town in the country. This is due to the already-effected plan of building a multi-billion Tatu City and another similar project known as the North Land City. It's also expected that the town will attract business opportunities or investments from major key players in the country.

Definitely, this is a town to watch out as it promises better things to come.