Among the many palaces in St. Petersburg, Russia is the Hermitage, now known officially as the State Hermitage Museum.

It is one of the oldest and one of the largest, in terms of the sheer size of its art collection, art museums in the world.

It is situated on the banks of St. Petersburg’s Neva River and is actually a complex of five  buildings.  These are the Winter Palace, Hermitage Theatre, Small Hermitage, Old Hermitage and New Hermitage.

The largest of the buildings is the Winter Palace, the home of Russia’s Tsars since it was first built for the Empress Elizabeth, daughter of Peter the Great.

The Baroque style, three story green palace was designed by Francesco Bartolomeo Rastrelli and constructed between 1754 and 1762.

Elizaveta Petrovna (Empress Elizabeth) died in 1762 just before the palace was completed. Elizabeth was succeeded by her nephew, Peter III whose reign lasted only a few months before he died and was succeeded by his wife Catherine, known to history as Catherine the Great.

Catherine became the first of the Tsars to live in the palace which was the official residence of the Tsars until Tsar Nicholas II was forced to abdicate and the monarchy abolished following the liberal February Revolution of 1917 which preceded the Bolshevik coup in October 1917 (known as the October Revolution) which brought Vladimir Lenin and the Communists to power.. 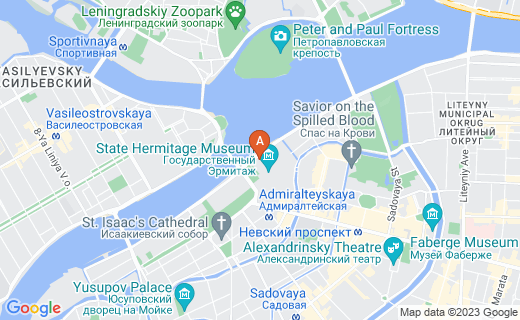 The Winter Palace in St. Petersburg

Catherine the Great Sets the Tone for the Palace

As Empress, Catherine moved into the completed Winter Palace and made it her official residence.

From Peter the Great onward, the Russian monarchy looked to make Russia more European. Peter’s conquest and annexation of St. Petersburg was part of this attempt to extend Russia more into Europe socially and culturally. To this day St. Petersburg is the most European of Russian cities.

Peter the Great began the Tsarist tradition of collecting art from Western Europe and Catherine the Great continued it on a grand scale.

In 1764 Catherine the Great initiated the construction of a small two story palace next to and adjoining the Winter Palace. Today, this is known as the Small Hermitage.

When I first visited St. Petersburg (then known as Leningrad) as a college student this little palace was known as the Hermitage with the Winter Palace and other parts of the present State Hermitage Museum remaining separate museums or used as administrative offices by the Soviet Government.

Catherine the Great of Russia

Catherine's Private Hideaway and Start of the Original Museum

I still recall touring what was then known simply as the Hermitage with our college tour group and the guide telling us that Catherine’s collection contained many paintings by famous artists, but because the Hermitage was off limits to all but a select few friends of Catherine and her successors, many of these masterpieces were assumed by the art world to have been lost or destroyed.

It wasn’t until the Soviets opened the Hermitage to the public in the years after coming to power following the October 1917 Bolshevik coup.

Like Catherine, her successors were also great collectors of art. Following the collapse of communism and the removal of the shackles placed on Russian history, culture and religion by the Soviets, the Russian people took a great interest in re-discovering their hidden past. Part of this involved restoring many of the old palaces, churches, monasteries and other pre-Soviet historic sites.

Thus, while the Hermitage and Winter Palace were operated as public museums during the Soviet era, the rest of the complex was used for government offices. Now, the entire complex is operated as one of the world’s greatest art museums. However, despite the vast quantity of art on display, it is only a portion of the vast art collections of the Tsars.

Whether an art lover or not, anyone visiting St. Petersburg should take a few hours to squeeze in a visit the Winter Palace and Small Hermitage. Even if one is not interested in the art itself (and the collections are not limited to painting and sculptures but cover wide range of historic collectibles) the sheer beauty of the interior architecture alone is worth the visit.

If you are one of those who have no plans  for a trip to St. Petersburg in the near future, you can still visit the website of the State Hermitage Museum , click on the link for Russian or English language and then click on the Digital Collection link.  You can then select the type of collection you wish to view and settle in for a few hours of viewing the art of your choice.

A second option is to click on the Exhibitions link to see if an art museum near you is hosting an exhibit  from the collections of the State Hermitage Museum.

An Interesting Aside: Infidelity, Murder and the Replacing of a Weak Tsar Before a German Born Princess Moved into the Winter Palace

In addition to Peter the Great (Tsar Peter I), Catherine the Great (Empress Catherine II) is probably the most recognized Russian Tsar outside of Russia.

The marriage of  Peter and Catherine was not a happy one and both spent more time in bed with their lovers than with each other.

Like Catherine (who took the name Catherine upon converting from the Lutheran faith of birth to the Russian Orthodox faith of her adopted country), Peter was also German as his Russian mother had been married to a German noble and had given birth to and raised Peter in Germany.

While Catherine worked and made herself very popular with the Royal Family and the Russian people, Peter was very unpopular, especially with the powerful nobility.

Catherine, fearing that Peter planned to divorce her and marry his lover, Elisabeth Vorontsova , thereby replacing Catherine with Elisabeth as the Tsarina, conspired with her then current lover, Grigori Orlov, to overthrow Peter as Tsar.  Catherine obviously didn’t mind losing Peter as her husband but definitely didn’t want to lose her position as Tsarina which would be lost if Peter divorced her.

However, before Catherine and Grigori could make their move, the Russian Imperial Guard, angered by Peter’s plans to institute harsher discipline on them, revolted and imprisoned Peter and then forced him to abdicate.  While imprisoned by the Guard Peter was killed.

It is unknown whether Catherine ordered the killing of Peter or whether his captors decided to do this themselves.  Regardless of whether the killers acted under orders or on their own, Catherine took no action against them.