Sagbayan Peak in Sta. Cruz, Sagbayan, Bohol, is set on top of a hill. Probably, it was one of the chocolate hills before and then they convert it into a recreation center and resort. But, I have yet to research more on this and see if my guess, hunch, gut feeling is correct.

The entrance gate was not that far from the street road fronting the peak although the pathway is hilly so we just hired a motorcycle driver to take us up. We were too tired to walk. Hahaha. But if you still have lots of energy, then go for it. It’s just a walking distance anyway, probably around 10 minutes.

At the entrance, you will see tour vans lined up, foreign and local tourists talking to each other and looking around the area, huge trees as backdrop, and the center’s water park. When asked about the entrance fee, we paid a total of ₱100, ₱50 for each of us. It’s ₱50 for kids and adults. But of course, a discount is given to senior citizens and persons with disabilities accordingly.

It was the Torrefrancas who envisioned of Sagbayan Peak to become one of the major tourist destinations in Bohol and create jobs for the local people. Find out more about the family here.

Since we went there ourselves, with no tour guide, travel agency, or whatsoever, I was concerned about our transportation back to Carmen so I asked the entrance ticket collector about it. And to my surprise, he actually had his own motorcycle for hire. He can wait for us until the center closes and he will then take us back to Carmen Bus Terminal for ₱180.

At first, I felt comfortable about the idea but later on, I was doubtful because he was a stranger to us and the fare is too expensive. I thought if we just ride a bus or van going back, we can only spend around ₱ 50. I didn’t want to disappoint him so I just asked for his phone number and told him that I will just call or text once I’m okay with the offer.

Inside, you’ll be welcomed by this huge T-Rex (Tyrannosaurus rex) dinosaur and his Disney friends.

My son was so happy to see the dinosaurs especially the T-Rex. He almost can’t believe that he was afraid to go near. I touched and hold the T-Rex to convince him that it’s just a figure, it’s not alive. Right then and then, he walked towards the dinosaur, touched it, and examined to his satisfaction.

He was so amazed that he mingled with the smaller types of dinosaur. He even asked me to take a picture of him with his dino friends. There were life-size dinosaurs alongside the stairs going to the second stop as well.

Using my 8Ten SDV-5271 Action Camera, I took a picture of us with the T-Rex and Disney characters and the Sagbayan Peak letter sign as our backdrop. I just placed the camera on top of the car near to us and set the timer, so I and my son could have a picture together, capturing the whole background. I don’t have a monopod and there was no one we can ask help from, so that was our only option. But it’s okay. Hahaha. That made such moment very memorable.

After our pictorial, I decided to go and explore the other areas of the park. I saw a pathway going to the children’s playground. So we took that way and saw this spacious and complete kid’s playground, free for all tourists. But despite how colourful and exciting the playground was, my son was not interested to try any of the rides such as the swing, seesaw, and more.

When we look towards the right side of the peak, we saw another group of life-size animal figures, big and small, including seals, penguins, zebras, giraffes, elephants, and a turtle. My son was so delighted to see all of them and I asked him to take a picture with each of the animal.

Right after, we went inside the Kids Town, located next to the group of life-size animal figures. We were so excited because it looks like Disneyland. And I was right, we felt like we were in Disneyland Park.

Here’s what you can see inside:

We really had a great time. There were a lot of local tourists busy taking pictures. There’s actually a canteen inside the Kiddy Town so you can sit down and rest for a while, freshen up, look at the surrounding, have a snack and refreshing juice drink.

Later on, we head down to the pathway that’s lined up with pine trees, which made us feel like we were in Baguio City. Slowly, we walked towards the view deck where we can see the famous Chocolate Hills. When we got there and look at the hills, they were not chocolate in colour though. Hahaha. All the hills were covered with lush green grass and small trees. Here’s the big difference between the hills you can see from the Sagbayan view deck to that of Carmen.

So I suggest that you go to Carmen, Bohol if you really want to see CHOCOLATE HILLS and not GREEN HILLS. Hahaha. But maybe during the summer season, the green grasses might wither and so, the Sagbayan hills will turn chocolaty.

The Sagbayan view deck was renovated after the 7.2 magnitude earthquake hit on October of 2013. Check out this video.

There were houses right below in some of the hills, which for me is very dangerous. The hill can crack or a land slide can happen that the houses beneath can all be covered up. It’s really dangerous. Living there should have been prohibited. Also, the houses were somewhat an obstruction to the view. It could have been better if there was no building or what in all the hills.

We wanted to go inside the Butterfly Dome, a few distance away from the view deck, but it was closed for maintenance. But I saw a few butterflies of different colours inside as well as potted plants to serve as their home. There was this pond in the middle with a big butterfly figure on top. It looked like a garden fountain with one big butterfly as the centrepiece.

Because I was so tired and exhausted of our trip that my only goal after we visit Sagbayan is to find a good place to stay and take a rest, I forgot to check out their tarsiers. Good thing Maasin Zoo in Southern Leyte has a few tarsiers under their care so we were still able to see what they look like. Hahahaha.

We walked towards the exit gate but to my surprise it was close. I was so tired that I don’t want to turn around and go back to where we started so I decided that we just cross over the wooden fence and get out of the center fast. And, yes, we did it! Hooray! It felt very, very, very relieving to finally get out from the place and go back to Carmen so we can find a place to stay and rest. I was even imagining myself dipping into a cold and refreshing swimming pool to take away all my tiredness. Hahaha.

As we were approaching the main exit gate, the guard was staring at us for a while and I thought, the center might have this hidden camera and he saw us going out through the prohibited fence. But, thank goodness, he just passed through us and we hurriedly went to the street road to wait for a van or bus going to Carmen. It was out first time in that area so I didn’t know about the transportation schedule. I was worried that there might not be any van or bus going to Carmen since it was already quarter to 5pm.

While we were patiently waiting for a van or bus, a motorcycle rider approached us and asked where we were going. He offered to take us for ₱150. I tried to ask for a lower rate and thank goodness, he agreed. I only paid ₱130.

Arriving at Carmen Bus Terminal, we had to wait for around 2 hours before a bus going to Ubay dropped by. It was around 6 pm that we finally left Carmen. We arrived in Ubay Bus Terminal around 7pm. We’re lucky because the Ubay Bus Terminal actually transforms into a big barbecue station like Larsian in Cebu, where you see lots of barbecue stalls all in one place. After we ate, we immediately head towards the Goddy Goddy Lodge.

The next day, we had to wake up early like 5 am so we have enough time to prepare. We ate noodles paired with cheese bread. After that we went to the port so we can catch the earliest boat ride towards Bato, Leyte and we did it. We had tickets scheduled to leave at 7:20 am. Since it was still 6 in the morning, we had our breakfast in one of the carinderias. Later on, we went to the port, paid our terminal fees, and walked towards the banca. The boat left on time so we arrived in Bato early, around 9 in the morning.

Would you be interested in visiting Bohol's Sagbayan Peak Resort and Recreation? 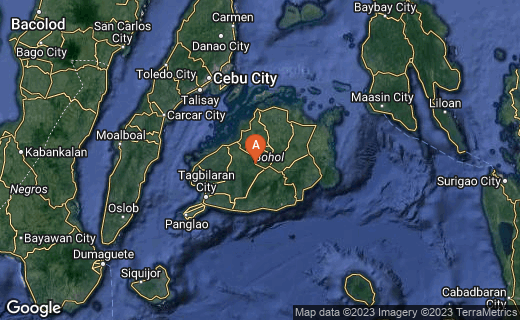 Cast your vote for Sagbayan Peak Resort and Recreation Center