In 2010, as part of the consolidation of Roman Catholic facilities throughout the Cleveland Diocese, the former Saint Ann Church and School at the intersection of Coventry Road and Cedar Road in Cleveland Heights, Ohio merged with three other local Catholic churches — Christ the King, Saint Philomena and Saint Louis — to form an enlarged congregation and communion. (The three subsumed parish facilities have since been downsized and repurposed to other diocese services, or sold.)

Saint Ann Parish was originally established in the late summer of 1915, as Father John Mary Powers, at the direction of the bishop heading Cleveland’s Roman Catholic diocese, directed the groundbreaking for the original Powers Hall. That structure would serve the newly formed congregation, as both church and elementary school, for almost four decades.

Construction of a new church structure for the growing congregation began in 1948, and in late 1952 the impressive present-day Classical church was dedicated. The church’s pale stone edifice and tall bell tower provide a dramatic and commanding presence overlooking Coventry and Cedar Roads. 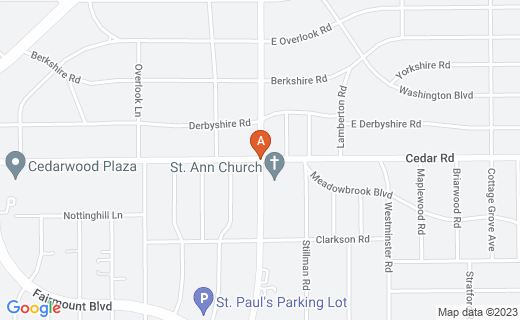 The above view of Saint Ann Church is from this street intersection.

The Church and School Structures

Saint Ann School, a traditional school adjunct to the Roman Catholic parish church, had trained eight grades of co-ed students since 1916. For nearly a decade, those classes were taught within the same structure that hosted all church activities and services. An additional new school building was erected in 1925, expanded in 1960, and remodeled several times over succeeding decades. Until 1999, school instruction was provided primarily by The Ursuline Sisters of Cleveland, a Roman Catholic order of nuns. Today the Saint Ann Parish provides K-8 parochial schooling for about 280 area students.