Visiting new places and venues can be educational and entertaining. I am pleased to share this fun experience with you.

No, I am not talking about Rice-a-Roni here! I am referring to the first vacation trip taken with my husband to California from Houston, Texas. We planned to spend several days there sightseeing before heading to the Sonoma and Napa Valleys to visit wineries.

My husband used to travel quite a bit representing a fine paper distribution company, and he had been to San Francisco previously. He wanted for my first time there to be extra special.

After consulting with the reservations desk at the Huntington Hotel, he chose the corner room (number 1100). The location is high atop Nob Hill, one of the city's more famous hills, with an elevation of 325 feet. The room offered spectacular views of many parts of the city, including glimpses of Alcatraz Island out in San Francisco Bay, Grace Cathedral, and other pretty sites. My hubby chose well!

San Francisco has several named hills, as well as some unnamed hills, over seventy in fact. Some of the highest ones are Twin Peaks, Mount Sutro, and Mount Davidson. The latter one tops out at an elevation of 925 feet.

Other well-known hills beyond Nob Hill are Russian Hill, Telegraph Hill, Rincon Hill, and Lone Mountain. The list of hills in San Francisco is extensive, and because of the topography, most people, when hiking those hills, wear comfortable walking shoes.

We saw many people carrying their dress shoes or work shoes with them. One thing is for sure. Not too many women are walking great distances wearing high-heeled shoes. At least we did not spot many as we were out doing our sightseeing.

One night we took a taxi out to dinner and then decided to walk back to our room at the Huntington Hotel as it was not that many blocks away. I was wearing high heels. Big mistake! I did not repeat that action! (Smile)

This hotel is one of several luxury hotels in San Francisco, and the Huntington has a rich history. It bears the name of C.P. (Collis Potter) Huntington, who was a most enterprising individual.

Having extensive business acumen and after doing several other types of work, C.P. Huntington teamed up with Charles Crocker, Mark Hopkins, and Leland Stanford during the gold rush era in California. Combining finances and efforts (they had the name "Big Four"), they changed how people traveled by train from the east to the west coast with their Central Pacific Railroad line.

When it was joined together with the Union Pacific rail line at Promontory Point, Utah, in the year 1869, transcontinental travel became possible all by rail.

With all of the wealth that this helped generate, C.P. Huntington did not rest on his laurels. He became an active participant in other enterprises, which continued to add to his amassed fortune.

Many other wealthy individuals chose to build their mansions on top of Nob Hill because of the beautiful views, and the "Big Four" were among them. With the combination of premier architects and seemingly unlimited bank accounts, these industry giants soon had palatial surroundings.

Unfortunately, Mother Nature decided to shake things up a bit, and after the 1906 earthquake, fires raged out of control. Most of these mansions were destroyed, including the one owned by the Huntington's. Where it once was situated is now Huntington Park, given to the city in 1915. Now all people, regardless of wealth, can enjoy that premium spot!

Where Grace Cathedral now stands was also the home of a mansion destroyed by that same fire. It is the largest Episcopal church located on the west coast of the United States. I took several photos from the vantage point of our room.

One day we looked down to see an art show set up. Since my hubby and I both like art, we strolled across the street and ended up purchasing a limited edition print that reminded us of the trees in Golden Gate Park. We had it shipped to our home in Houston, where it still adorns a wall and reminds us of that vacation trip.

Another morning upon gazing down at Huntington Park, we saw people doing their morning exercises. It is a well-utilized park that takes up an entire city block in San Francisco.

Looking out of one of our Huntington Hotel room windows, we could see the Fairmont Hotel. It is the one with all of the flags flying above the entrance. It was built and opened just days before the 1906 earthquake. Also scorched by the fires, the Fairmont Hotel was rebuilt in the same location.

The Fairmont served as the setting for the television show "Hotel," and it was called St. Gregory in that TV series. I used to enjoy watching that television series during the years 1983 to 1988.

The main characters (played by James Brolin, Connie Sellecca & Shari Belafonte, and others) consisted primarily of the hotel staff. Each week different situations occurred with the ever-changing landscape of hotel guests, which made for endless stories.

Our Home Away from Home

Each day my hubby and I had different things to see and explore in San Francisco, but it was pleasurable to come back to the elegance of the Huntington Hotel at night.

One night after a busy day, we decided to stay in our room and order room service. Seated at a table in front of one of the windows in our room while watching the glittering lights of the city sparkle as the sun went down, we enjoyed a delightful repast while sipping from glasses filled with a tasty California wine. It was the perfect ending to a glorious day!

Another evening we dined in the Huntington Hotel's award-winning "Big 4 Restaurant." We thought that our dinner was delicious and the restaurant well deserved the accolades given to it by many sources.

My hubby and I have also stayed in other San Francisco hotels, but I remember my first visit and comfortable lodging at one of the top hotels in San Francisco with great fondness.

This YouTube video titled "Our room at the Huntington Hotel in San Francisco" looks like the filming took place from our very room. Perhaps it was!

Does the Huntington Hotel look like a place in which you would like to stay if visiting San Francisco? 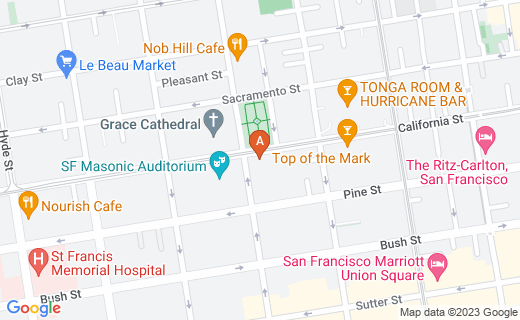