I forgot the Pearl for which my parents had sent me. Through the heaviness of their nourishment I sank into deep slumber.”

— The Hymn of the Pearl from The Acts of Thomas, translated by Hans Jonas, The Gnostic Religion

It wasn’t a good start. It seems I had the wrong ticket. It was a peak time train and I only had an off-peak ticket. I was thrown off the train at Milton Keynes, and had to wait around on the platform for three quarters of an hour, watching dejectedly while other trains and other passengers continued on their way. Consequently I didn’t arrive in Bewdley until late in the evening, hot, stressed, weary and hungry.

But my first impressions of the town were very positive, turning a sudden corner in the taxi which brought me from Kidderminster station, dropping down into a valley, and then seeing the bridge spanning the sparkling River Severn nestled between the hills, and the row of Georgian-fronted buildings on the far side lining the bank.

Bewdley is very pretty. A well preserved medieval manufacturing town, it once stood at the border with Wales. The River Severn was the frontier. There’s a chip shop at a place called Catchems End just before you come into Bewdley. The taxi driver told me this story. Once, he said, Bewdley was a sanctuary town. If you were running away from the law, Catchems End was the last chance for them to catch you. Hence the name. After this, once you were over the river in Bewdley, you were safe from prosecution, in another country.

So it’s interesting that the place I am going to is called Sanctuary, and I certainly feel like a fugitive at this point, running away from the absurdities of 21st century life.

The Sanctuary is situated next to the river. You enter it through a gate, passing through a courtyard lined with carvings, at the far end of which is a resplendent garden. Tony Bailey, the therapist, is there to greet me, shaking my hand warmly while I complain heatedly about my treatment at the hands of the rail company.

After that he took me up to show me the space.

The first thing you notice is that it’s very uneven. The floor slopes up to the bathroom, and down to the kitchen. The building dates from 1599 and there are several ancient, rickety-looking beams spanning the ceiling. Fortunately they are reinforced by steel girders. The bathroom door looks as old as the beams and is mottled by holes. There’s a decent sized living room with a TV and a CD player and a neat bedroom with a double bed and a bookshelf stuffed with books.

So this is it, my resting-place for the weekend: a self-contained flat in a creaking, uneven medieval building. My one disappointment is that there’s no view of the river. All windows look down on the ubiquitous courtyards around which most of Bewdley is arranged.

I had planned to start my SHEN therapy that night, but was far too fractious and hungry to contemplate it now. Instead I bought some fish and chips, after which I lay down on the settee in front of the TV and promptly fell asleep.

SHEN therapy was developed in the 1970s by scientist Richard R. Pavek. It is not, as it sounds, an ancient Eastern therapy, but a modern, scientifically based therapy, which nevertheless uses concepts and ideas employed by ancient systems.

“S.H.E.N” stands for “Specific Human Emotional Nexus”. It is based on the notion of the biofield which Tony says permeates the body and is the medium through which emotions are experienced. Negative emotions are trapped within the body through a process called the Auto-Contractile Pain Reflex. This is the natural reflex by which muscles automatically contract around pain in order to prevent tissue damage. In the case of physical pain the contractions release when the pain subsides. In the case of emotional pain, however, the contractions may persist and thus trap the emotion, slowing the natural flow of the biofield around the body.

The notion of the biofield sounds a lot like Qi energy in ancient Chinese philosophy, and, indeed, Tony refers to this when he talks about directing the Qi energy with his hands. Also the areas of the body where he works - though they are given unfamiliar names - clearly correspond to the Chakras of the ancient Hindu system.

Therapy sessions take place in a large Cathedral-like room dominated by ancient beams. After the introduction Tony guides me to the bed, which is what looks like a camp bed perched precariously on top of a massage table. The camp bed construction allows the therapist’s hands to be placed under as well as over the body. So high is the table that Tony has to help me up, but once there it is very comfortable and feels much more secure than it looks. There’s a pillow under the head and another under the knees. You have the feeling of being cradled.

Firstly he tells me to imagine a pearl dropping down slowly through my body as if through water, and to let it rest where it will. The pearl is my attention. I am quite taken by this idea, which he repeats at every session. It reminds me of an early Christian poem called “The Hymn of the Pearl” from The Acts of Thomas which is the tale of the soul lost within material existence and of its redemption through Gnosis.

I close my eyes allowing that thought to come to rest in my belly, and Tony begins his work, which, he says, is normally conducted in silence.

He begins placing his hands on various parts of my body. The hands are held quite still in different positions around the body. Sometimes one hand is held above the body while the other is held below. Sometimes both hands are placed on top. Each position is held for several minutes, before moving on. No pressure is applied, but such is the imprint left on the body that after a while it begins to feel like there are several pairs of hands working at the same time.

My first feeling is one of familiarity. For instance, as his hands hover over my heart I see a golden light, and have a sense that this is a place I know very well. Also, as his hands rest on my belly, I am aware that anger comes from this place.

A couple of images come to me, both of them from William Blake. The first is of a man with his head pressed down between his knees, as if some great pressure is bearing down on him from above. The second is from the frontispiece to Jerusalem and is of a man descending a staircase into a dark cellar, carrying a lamp.

Neither image needs any explanation here, and Tony seems pleased when I describe them to him later.

I also have an image of a tight, narrowly confined street which is blocked with traffic, an image which Tony feels describes the congested state of my biofield.

I have no reason to disagree.

One thing you notice very quickly in Bewdley is the Severn Valley Railway, which passes near the town.

Walks along the river are accompanied by the sound of the old steam train huffing along on its tracks, and even the silence of the therapy session is punctuated by its raffish whistle echoing through the valley like a pre-historic bird of prey warning rivals from its nest.

The town stretches out along the river, and there are a number of pubs and cafes with tables laid out on the embankment, with views of the river and of the wooded hills beyond.

At the height of summer (which is when I am here) the town has an air of a holiday destination; which, in fact, it is, serving people from Birmingham and the Black Country, who flock to the banks of the Severn to get a welcome breath of cool river air. You can even buy Bewdley rock from one of the shops on the front, and there are at least two ice cream parlours..

The river bank is lined with anglers, and the town is heaving with bikers, who seem to be holding a rally, but a brisk five minutes walk along the river soon brings you out of the main haunts and into the countryside.

The bookshelf in the bedroom back at the Sanctuary has a number of guidebooks to Bewdley and the Severn Valley, with some great recommended walks. However, I just choose to wander along the riverbank, taking in the sense of air and space and listening to the river’s constant murmur. Several river birds skim through the air, and one I notice folds its wings and drops into the river, emerging triumphantly with a fish in its beak.

As for the therapy, it was deeply relaxing and I slept through most of it. There were eight sessions altogether and I probably slept through five of those. The other three I just dozed.

Tony seems a little disappointed in this, though he tells me that my body continues its healing beneath his hands. He uses a medical metaphor. If I had a boil on my neck, he says, and went to the doctor, what would I prefer: for the doctor to lance the boil, and to dress it and send me on my way - a brief moment of pain followed by relief - or for him to merely allow me to talk about my boil? Tony says SHEN is like lancing the boil. Painful memories are brought up and experienced, but after that there is a sense of release as the body returns to its natural, healthy state of well-being.

Unfortunately nothing like this happens to me, though the sleep is a great relief, and I obviously feel comfortable enough in Tony’s presence to allow myself to do this.

All in all I would heartily recommend Bewdley as a place to visit, and the Sanctuary as a place to stay. SHEN is relaxing on a very deep level. Tony is a decent man and, as a person to tell your troubles to, I would trust him completely.

Sometimes, maybe, that is therapy enough. 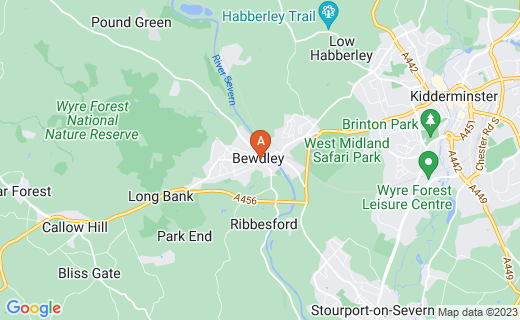