The Bonaventure Cemetery in Savannah Georgia is an awesome place to go and visit. The cemetery has an eerie feeling to it but it is so inviting that it draws you in without you knowing it. I have been to the cemetery many times. Our daughter and her family lives in Savannah so when we go and visit them we make it a point to stop at the cemetery for a visit.

In Savannah there are several cemeteries to stop and visit, but the Bonaventure is a must, especially if you are into ghost hunting and paranormal activity. Rich in history and legend, the cemetery is the final resting place for many distinguished and notable citizens from the area.

The Bonaventure Cemetery started off as a plantation that was owned by the Mullryne’s and the Tattnall’s. A red brick plantation home was built on the 600 acres of property that sits on the banks of the Wilmington River in 1760, this home is still standing at the entrance to the cemetery. The city of Savannah purchased the cemetery in 1907. The first identified adult to be buried in the cemetery was Harriet Fenwick Tattnall.

Also some of Savannah’s celebrities have been laid to rest in Bonaventure which include singer Johnny Mercer and poet Conrad Aiken.

Today Bonaventure Cemetery is one of the most visited locations in historic Savannah. With the movie “In the garden of good and evil” produced by Clint Eastwood the cemetery has gotten a lot of publicity.

The grounds are to be considered some of the most beautiful cemeteries in all of the U.S. Many photographers will spend hours on end waiting for the perfect shot of the sunrise or sunset through the old Spanish moss covered oak trees that are on the property. While other photographers will come to take pictures of the interesting headstones, the beautiful camellias and azaleas that line the drives through the cemetery or the magnificent magnolia and dogwood trees throughout the property.

Many visitors come throughout the year just to experience the draw that this cemetery has on people. Walking up and down the lanes with the dead buried on either side of you it can be overwhelming at times which can bring the strongest to tears at a drop of a hat.

When we visited the cemetery it was close to dark, which is an eerie experience of its own. The air was not moving, the humidity was around 90 percent and the temperature was about 93 degrees. With conditions like this and the sights and sounds of evening approaching a feeling came over us that was out of the ordinary. We all have visited cemeteries before, but none of us had experienced anything like this before. A feeling like we were being watched or followed, but we were by ourselves. 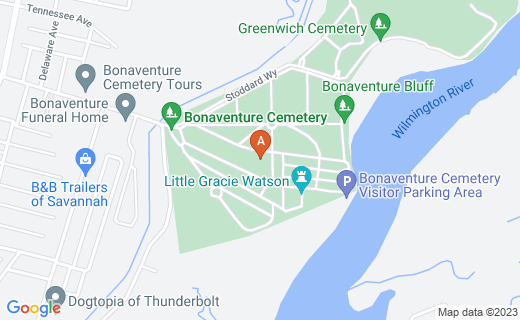 Bonaventure Cemetery is considered to be the most haunted cemetery in Savannah Georgia. I do question this, from my own experiences in the various cemeteries around the city. But from what I researched many people that have studied or been around these parts a long time do say that there are many spirits that roam and linger around the grounds of Bonaventure, giving it the title of the most haunted cemetery in Savannah.

Besides human spirits that roam the grounds oddly enough there are accounts of packs of ghost dogs that have frightened many people while visiting the cemetery. People have not seen the dogs but they heard uncommon growls and terrifying barks from these unseen animals. This has been reported many times to the people overseeing the grounds.

Tours of the cemetery

There are all sorts of tours of this famous cemetery. One of the tours that we took that I do highly recommend is the guided walking tour that takes place after the cemetery closes to the general public. This tour takes place before it gets to dark outside and the guide really knows the history of the cemetery and a lot about the people that are buried in the cemetery. He takes his time and makes plenty of stops along the way to tell you stories of different events that took place in the cemetery.

Which ever tour you take, remember to bring a good camera, plenty of water to drink, sunscreen and if you are going to take the evening tour make sure you bring along bug repellent. The days and evenings are very hot and humid in Savannah, so make sure you are prepared for the heat. Most of the tours are walking tours, so make sure you wear good walking shoes, and dress according to the weather for the day of your tour.

Would love to hear your comments.