Kadugannawa is one of the entry points to the ancient hill capital of Sri Lanka, the Kandyan Kingdom. It is popular because of the geographical setting which creates spectacular views over the valley below, and because of the gap through the mountains which had made it extremely difficult to access the Kingdom during the time of the Kings. Many Portuguese, Dutch, and British armies faced annihilation trying to capture the Kingdom of Kandy from 1505 to 1815. 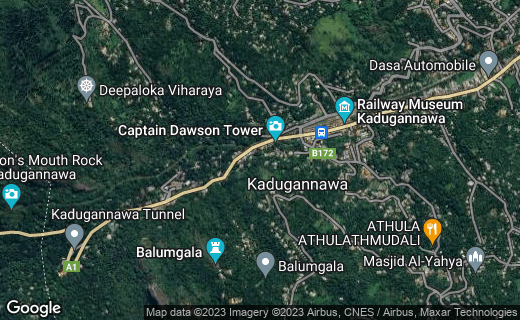 If you are traveling along the A1 Highway, Kadugannawa starts as soon as you pass Hingula, and begins the course uphill. From there you can enjoy many sights of Kadugannawa until you reach the town. This scenic stretch of road is about 5 kilometers long.

During the British colonial times in Sri Lanka there were no easy road to access the Kingdom of Kandy. The old road from Colombo to Kandy was a very long one, which was via Kelani Valley, Ruwanwella, and Gampola. Governor Edward Barnes wanted to build a shorter road to Kandy and assigned the task to Captain William Francis Dawson in 1820. Captain Dawson planned the project and started work immediately. However, he had to face the difficulties of sudden climatic changes in the central hills, and the hazards of cutting through the thick jungle. Captain Dawson finally fell badly sick. Nine years after the commencement of Colombo-Kandy road project, he succumbed to his sickness on 29th March 1829, while the road work was still not complete.

When the road was finally built to Kandy, the friends and admirers of Captain Dawson erected this tower in 1832 in memory of him, at the highest point of the Kadugannawa pass. Anyone traveling along the Colombo-Kandy highway today can see, and visit this tower.

When walking down the road passing the Dawson Tower, you can see the Rainco Umbrella Factory on the right-hand side of the road. The factory is located on a stretch of land lying low between the road and another mountain.

Passing the umbrella factory, you will arrive at the huge mural erected on the right-hand side of the road. This beautiful mural shows a part of the Kandy Esala Pageant with traditional Kandyan dancers, drummers, decorated elephants, and the Temple of the Tooth Relic. This mural is erected facing the incoming traffic to Kadugannawa as a gesture of welcome.

The engineers who built this road had to face great challenge in making it through the Kadugannawa pass. They had to drill a tunnel through a huge granite rock without all the machinery and technology that today's road engineers have. The tunnel of Kadugannawa is a historical monument today. The new highway goes over and around it. You reach this tunnel when you walk further downhill along the Kandy-Colombo highway from Captain Dawson Tower. If you look at the bottom left-hand corner of the map above, Kadugannawa tunnel is at the elbow-turn of the road.

Scenes from the Mountain Edge

The Highway is built along a walkable edge of the cliffs. This can well be an old walking-route of the local Sri Lankans that the British made use of. The cliff rises high on one side of the road, and a deep precipice on the other. Walking further downhill, brings you to the stretch of the road which stands like a pavilion to view the scenery of the valley about a 1000 feet below, and the surrounding mountains. Batalegala (Bible Rock) and Devanagala rocks which are seen at a distance add beauty to the scene. Ambuluwawa mountain peak of Gampola also can be seen from here on clear days. Surroundings can be seen well with a pair of binoculars.

From here, until you meet the 97th kilometer post there are stalls of fruits, sweets, and boiled corn. During the avocado season, these fruit stalls become laden with avocados. It is the same in the Durian season. Avocado and Durian are grown heavily in Kandy district. King Coconut is an all time favourite in these fruit stalls. King Coconut water best quenches the thirst, and the soft and sweet kernel in them is good to eat after the drink. If you have not tasted the King Coconut kernel, just ask the seller to cut it open for you.

There are a number of spots where people boil corn for sale. They use mostly self-made firewood-stoves to do the boiling. Boiled corn can postpone hunger for a while. Having a boiled-salted corn to eat while walking around is fun as well.

At a few places in between these stalls, there are Car-wash guys. They use water that come from springs on top of the cliff, which become highly pressured when it comes down, and makes a natural pressurized car-wash. Not only the pressurized water, but they also use all kinds of car-wash liquids. Here, you can get the car cleaned at Kadugannawa for a few rupees on your way to Kandy.

While walking along the scenic stretch of road in Kadugannawa, I came across this old fashioned house. It is built on the side of the cliff above the road. It looks well maintained and recently colourwashed, and on its front wall right above the entrance is written '1732', below and between the two swastikas, which can be the year of construction. If you go this way, do not forget to have a look at this beautiful house on the side of the cliff.