With its handful of UNESCO Cultural World Heritage Sites and avid appetite for technology and development, South Korea offers its visitors a fine contrast of ancient and modern cultures arguably found nowhere else in the world.

In this country, one can find at least nine cultural world heritage sites:

These UNESCO Cultural World Heritage Sites from South Korea are ancient vestiges of the country’s glorious days of yore.

Fast-forward to the modern times and visitors can see South Korea as a country of people with can-do attitudes, undying persistence, and hard-wearing desires to carve its premium place in the global marketplace.

People have constructed modern buildings, transportation systems, technological wonders, and other modern fascinations that the mind could have never thought through.

This beautiful contrast between South Korea’s past and present is what makes visiting its UNESCO Cultural World Heritage Sites an experience that can forever be etched in the minds.

The cultural world heritage sites may explain South Korea’s historical and well-established motivations to achieve great things as a country.

Perhaps the most favored palace of the mighty princes of the Korean Joseon Dynasty, the Changdeokgung Palace Complex in Seoul, South Korea was inscribed the honor of being called a UNESCO Cultural World Heritage in 1997 for at three reasons:

The 15th-century construction of this UNESCO Cultural World Heritage Site in South Korea was started on the orders of King Taejong, who wanted government and royal buildings be put up in a 58-hectare garden that blends well with the natural features of Mt. Bugaksan.

Some of the most impressive structures found in this world heritage site include:

2. Gyeongju Historic Areas - Cultural World Heritage Site in South Korea that is the World's Largest of its Kind

Touted as the largest outdoor museum in the world, the Gyeongju Historic Areas comprises the ancient ruins of outdoor sculptures, pagodas, reliefs, temples, and palaces built during the Korean Silla Kingdom between 7th and 10th centuries.

The Gyeongju Historic Areas was declared a UNESCO Cultural World Heritage Site in 2000 for it exhibits human values through monumental arts, architecture or designs and because it is a testimony to a by-gone civilization.

This world heritage site has at least four historic sub-sites:

3. Gochang, Hwasun and Ganghwa Dolmen Sites - UNESCO World Heritage Site with the Most Number of Dolmens in the World

In Gochang, Hwasin, and Ganghwa, South Korea, one can find hundreds of dolmens or tombs made up of stone slabs from the 1st millennium B.C.

While dolmens are found elsewhere in the world, the staggering number of Neolithic and bronze-culture dolmens in the three sites in South Korea is considered to be the greatest ever discovered.

Indeed, it is said that about 40% of dolmens in the world are found in Gochang, Hwasun and Ganghwa Dolmen Sites.

These sites were collectively declared a World Heritages Site by UNESCO in 2000 for it is a unique testimony to a cultural tradition or civilization that has long disappeared.

These woodblocks are collectively known as the Tripitaka Koreana or Palman Daejanggyeong , which literally means eighty-thousand tripitaka.

The tripitaka are said to be the oldest dated copies of Buddhist discourse, laws, and scriptures in Hanja script.

Moreover, these tripitaka are said to have zero scribal errors in its over 52,380,000 characters, 1,490 titles, and 6,500 volumes, signaling its high-quality workmanship.

Although the tripitaka were made in the 13th century, the actual Janggyeong Panjeon was renovated in the 15th century by King Sejo to house the woodblocks.

Located in the Goya Mountains of the South Gyeongsang province in South Korea, the Haeinsa Temple was inscribed the honor of a UNESCO World Heritage Site in 1995 for two reasons:

The Haeinsa Temple or the Temple of Reflection on a Smooth Sea is actually part of the Three Jewel Temples of Korea or the three major Buddhist temples in South Korea.

Each of the Three Jewel Temples maintains architectures that highlight the temple’s purpose.

In Tongdosa Temple, the main hall houses a stupa that is said to contain the vestiges of Buddha himself.

In Songgwangsa Temple, the main halls have prominent places for the prayerful Buddhist community.

Between 1794 and 1796, the UNESCO World Heritage Site of Hwaseong Fortress was built by King Jeongjo of the Joseon Dynasty when he moved to Suwon, South Korea the remains of his father Prince Sado, who was tragically murdered by his own father King Yeongjo.

King Jeongjo made sure that the tomb of his father was well-protected with massive fortresses, which extended about six kilometers, incorporated the military construction genius from the east and the west, and contained essential military fortifications.

The walls of this world heritage site measures between 13 and 20 feet in thickness and enclosed a land that originally measured 1.3 square kilometers.

Other structures found in the heritage site are watch towers, archers’ platforms, bastions, beacons, pavilions, chimneys that can produce either fire or smoke signals, and lookout posts.

Some of the structures have ruined due to either war or time.

The UNESCO inscribed the title of World Heritage Site on the Hwaseong Fortress in 1997 for the ancient fortress represents an admirable ancient military architecture that brought together the breakthrough in military defense from the east and the west.

Representative of the aristocratic Confucian culture and historic clan villages, the scenic Hahoe and Yangdong villages were inscribed the honor of UNESCO World Heritage Site in 2010 for two reasons:

Established between the 14th and 15th centuries, this world heritage site is nestled deep in forested mountains and faces the river and the farmlands.

This location is said to be ideal for the residents’ spiritual growth and social development.

In the village, one can find study halls, pavilions, and thatched-roofed houses, which can help oneimagine the old village lives in South Korea.

The spiritual monuments of Seokguram Grotto and Bulguksa Temple were inscribed the honor of UNESCO World Heritage Site in 1995 for they are masterpieces of Buddhist art in the Far East.

Overlooking the Sea of Japan at a height of 750 meters above sea level, the Seokguram Grotto is actually a secluded place inside the Bulguksa Temple.

It was constructed between 742 and 774 and has been the home to ancient sculptures of Buddha.

The oldest and arguably the most genuine surviving Confucian shrine reserved for the Korean royalty of the olden times is the Jongmyo Shrine, a UNESCO World Heritage Site honored in 1995 for its outstanding representation of a building or architectural ensemble that highlights select significant stages of Korean history.

Built in the 14th century by the orders of King Taejo, this cultural world heritage site was dedicated to the rulers of the Korean Joseon Dynasty and in fact houses the tablets on which the teachings of the rulers as well as the members of their royal clan are contained.

Since the Joseon Dynasty had several kings and queens during its reign from 1392 to 1910, the Jongmyo Shrine had to be expanded to accommodate the royalty’s teachings on tablets.

King Sejong started the expansion program when he created the Yeongnyeongjeon or the Hall of Eternal Comfort and since then other constructions began until 19 rooms had been constructed.

Much of the original complex, however, was burned down by invading Japanese in May 1592 during the Seven-Year War.

This cultural world heritage site, however, was restored by the Koreans in 1608. More renovations were done in 1667, 1778 and 1836, bringing the total number of rooms to 35 at the Jongmyo Shrine.

The Jongmyo Shrine has unassuming features:

At the Jongmyo Shrine, traditional rituals of dance and musical performances are held, the same practices that go back as early as the 14th century when the shrine was built.

These rituals are regarded as an intangible heritage for their antiquity and significance to the Korean history.

9. Royal Tombs of the Joseon Dynasty

The final resting place of some of the distinguished rulers of Korea, the Royal Tombs of the Joseon Dynasty was honored as a UNESCO Cultural World Heritage Site in 2009 for three reasons:

Found in Gyeonggi-do and Seoul, this UNESCO World Heritage Site actually refers to 40 tombs spread across 18 locations in South Korea.

Some of their distinct features include:

Korea on the Map 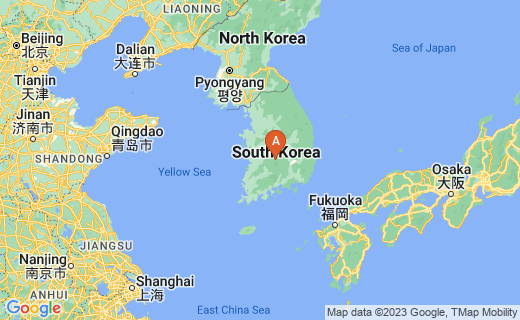