The Most Fascinating Science Museum in Oklahoma City

The world shuddered beneath my feet as a tremendous roar cascaded off the walls of the small room.  I could feel the earth violently heaving, as if some enraged god had thrust his fist against the ground in fury.  My knuckles began to turn white as sweat threatened to weaken my hold on the steel bar.  The groaning grew louder.  Whether it was myself or the cataclysmic churning of the earth I could not tell.   A painting of an old woman crashed against the wall, and the room seemed to tilt sideways.  I could feel myself falling as blackness overtook me.  And then, silence…

As quick as it had begun, it was over.  The lights flashed back on as I looked around in wonder.  It was as if the earthquake had never happened.

Of course, that didn’t surprise me – it had already been one of those days.  Just a few moments before, I had been speeding through the Milky Way faster than the speed of light.  I could almost reach out my hand and trail my fingers through the rings of Saturn.  Distant galaxies swirled around my head like an angel’s halo.  I had even dove into a black hole and emerged on the other side unscathed.

Old Mr. Einstein would be impressed.  It wasn’t even lunchtime yet.

I stood outside the small room and pondered my next move.  I knew I had a mystery to solve.  Apparently someone had been shot earlier in the day, and it was up to me to find out who.  Still, that could wait – an explosion just down the hall was waiting to be investigated…

Ever since its first inception in 1978, Science Museum Oklahoma has offered an extensive array of science exhibits that baffle the mind and tickle the senses. Today, the museum grown considerably, and is continuing to do so. As of the time of this writing, the science museum was in the process of creating a new wing dedicated to space exploration and astronaut ingenuity (Destination Space). Several other large rooms were also being prepared for additional exhibits; although one can only guess at the incredible discoveries those rooms will soon hold.

Currently, the museum offers more than three hundred and fifty different exhibits that cover all major fields of science.

The Social Sciences – Including Psychology, and Archeology

Through using the scientific method and analyzing the clues left behind, one can learn how to use forensic science to solve a hypothetical crime in Whodunit.  The scene takes place in a 1950’s setting, but the tricks and techniques used are completely modern.  Once the crime is solved, the exhibit leads one through actual cases and fully explains the science behind solving a crime.

The Life Sciences – Including Biology, Zoology, Anatomy, and Paleontology

At the tail end of Whodunit, a unique exhibit focuses on the anatomy of the human body.  While this section is suitable for small children, teenagers and adults will find this area more interesting.  One of the more spectacular exhibits in this section is a demonstration of an actual autopsy – or rather, a simulation of an actual autopsy.  Through use of special projectors, the science museum recreates the autopsy on a life sized human form.  While this may be too graphic for some, it is still an amazing display.  The room is clearly marked, so that it will not offend those who may not be able to handle it.

Of course, that is not the only biological display located in the museum.  If one is more inclined towards tamer things, SmartMouth may be the exhibit to visit.  This exhibit is geared towards kids, and it offers a variety of fun experiments dealing with the human body.

Next door, under a two story dinosaur skeleton, a series of aquariums form another small Zoology and Paleontology section.  While the aquarium is stunning, the different science exhibits really take the breath away.

Last in the life sciences section is one of the most impressive exhibit spaces in the museum.  A giant two-story treehouse forms the main area for GadgetTree.  Like the Swiss Family Robertson family gone wild, this massive playground reaches for the skies.  Almost every section in and surrounding the GadgetTree is filled with small science experiments that is sure to entertain and astound.

The Physical sciences – Including Geology, astronomy, Chemistry, Meteorology, and Physics

The Earth is always in constant motion, and many exhibits in Science Museum Oklahoma illustrate this clearly.  Beyond the life-sized dinosaur skeleton, there a large exhibit space dedicated to the study of the Earth.  Impressive minerals from all over the world dominate a “cave” wall, including huge samples of quartz and amethyst.

The most impressive part of this exhibit is the earthquake zone.  One can step inside a small room and witness firsthand the raw energy that an earthquake produces.  Watch as an abandoned street falls witness to their devastating impacts, and hold on tight as the rumble causes the floor beneath your feet to heave.

Almost hidden back in the corner of the museum is a working meteorological station.  Live satellite feeds dominate the walls while readouts of local atmospheric conditions spread out across rows of computer banks.

Travel a little farther into the heavens and explore the astronomy exhibits.  No prominent science museum would be without a planetarium, and Science Museum Oklahoma is no different.  Walk past the lunar capsules and wait for the show to begin.  The guided tour of the cosmos is definitely worth the trip – in fact, the guide is both extremely knowledgeable and entertaining.  Be sure to spend a few moments with him after the show, as he is indeed a wealth of great information.

Still, that’s not the only show going on.  There are some science experiments that are simply too dangerous to be hands on.  These experiments are performed by a “mad scientist” in Science Live.  The half hour show is a chemists delight with explosions, gasses, gobs, and other delights to please the eye and inspire the mind.

Mathematics and logic – The Hallmark of the Scientist

While there are many rooms dedicated to each of the specific sciences, mathematics and logic are used in all of them.  Arrayed throughout the building are smaller stand-alone exhibits that demonstrate everything from illusions and brain puzzles to the massive Tesla Coil and gravity machines.  These smaller hands-on exhibits are displayed in logical order, illustrating amazing principals of light and sound, kinetic and potential energy, solar and wind energy, and much more.

Once all of the exhibits have been seen, it’s time to head over to the Tinkering Garage and put what was learned into practice.  This large room has all of the building blocks to perform whatever great experiments come to mind.  It’s time to put knowledge of the scientific method to work!

In addition to all of the hands-on exhibits that Science Museum Oklahoma offers, there are also several other big attractions to make note of.  Inside of the science museum, there are what may be considered three additional separate museums.

In another section, across from the café, a large model train scene has been erected.  Watch as several trains travel through mountains and towns in this massive exhibit.  There is also an old-fashioned railway car beside the model train scene.  The railway car offers a glimpse into America’s not-too-distant past.

A smaller section of the museum displays hats from various movies, as well as other movie props.  Each display is well documented.

In addition to the separate museums, there is also a large Segway course located in the center of the science floor.  This guided course demonstrates the principals of motion and balance, as well as introducing many to a new form of transportation.  Be forewarned, for the first-timer, it’s not as easy as it looks.

Perhaps the biggest attraction to Science Museum Oklahoma is the 70-foot IMAX dome theater.  While the movies may change, the experience is always exhilarating.  Bigger and better than 3d, an IMAX experience is one that won’t soon be forgotten.  A note of caution here, if you’re one prone to motion sickness, this type of theater may make you uncomfortable.

Observations: Conclusions of a Hypothetical Visitor

Science Museum Oklahoma is a sprawling complex of experiments, exhibits, and eye-candy, but it is not without its faults.  The building is beautiful, but there are some parts inside that seem to be in a state of disrepair.  An excited visitor could hypothesize that the museum administrators spent more money on the exhibits than general upkeep.  The carpets appear to have been down since the age of the dinosaurs, and the occasional flakes of paint may seem as falling snow, but most of that is easily overlooked by the amazing displays the administrators have set up.

However, one could also hypothesize that it will not always remain so.  On last visit, there were numerous construction workers on the site.  It seems as if the museum was undergoing a slow transformation; walls were being painted, new tile carpets were being laid.  Apparently, the museum lost a significant amount of funding awhile back.  The last major ice storm did its damage as well, as the outdoor gardens were virtually ruined.  The greenhouses were missing glass tiles, and entire sections were roped off.  After speaking with the gardener and another member of management, I’m assured that the museum is doing all that it can to fix these problems.

Aside from the minor issues (and they were minor), the museum is one of the greatest destinations in Oklahoma for all science enthusiasts.  In fact, if one was to visit any museum in Oklahoma, this one should be on their top ten list. 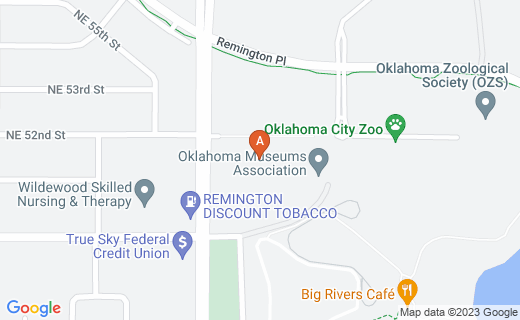