See The Cathedral Basilica of Saint Francis Of Assisi

The cathedral was constructed at the instruction of Archbishop Jean Baptiste Lamy. It was built between 1869 and 1886. Where the cathedral was constructed is the site of a former church. It was an older adobe church known as La Parroquia and was built between 1714 and 1717. There was even a church built on this site prior to La Parroquia. It was constructed in 1626 but was destroyed during the Pueblo Revolt in 1680. The Pueblo Revolt was an uprising by indigenous Pueblo Indians against the Spanish. Approximately 390 Spanish were killed, and thousands of settlers left the province. A dozen years later, the Spanish came back and once again occupied the Santa Fe area of New Mexico. They faced almost no opposition. The Cathedral Basilica of Saint Francis of Assisi has a small chapel on its north side. It is what remains from the previous church built in the 1700s.

He was a French-Roman Catholic bishop who was the first Archbishop of Santa Fe in New Mexico. Born in Lampedes in France, he studied seminary in Clermont and Montferrand France. Lamey was also trained by the Society of Saint-Sulpice. His ordination as a priest happened in 1838. After a few months working as an assistant priest, Lamy was granted permission to become a missionary for a bishop in Cincinnati, Ohio. Lamy served in a number of different missions in Kentucky as well as Ohio. Lamy was appointed bishop by the Pope and consecrated as a bishop in 1850. He was appointed as Viacriate of New Mexico the same year. Lamy arrived in New Mexico in 1853. He is responsible for building the Cathedral Basilica of Saint Francis of Assisi and Loretto Chapel. Lamy's time as a bishop ended in 1885 after his resignation. He passed away in 1888 as a result of pneumonia. Lamy was buried under the basilica's sanctuary.

The Cathedral Basilica of Saint Francis of Assisi was designed to stand out from the other surrounding adobe structures. The style used for its design was Romanesque Revival. Visitors who view it are able to see round arches characteristic of this style. The round arches are kept separate with Corinth columns in association with truncated square towers. The front of the basilica has large rose windows. It also contains nave windows with the images of the twelve apostles. These windows were brought over from France for use in the church. There are two towers. The one on the left of the Basilica is larger than the one on the right. The left tower is also a single row of bricks. The basilica was constructed from yellow limestone blocks. There was an addition put on it in 2005. In the upper facade of the basilica is a stained glass window. It was created as a replica of a translucent window made during the 1700s for St. Peter's Basilica. In the stained glass window is the image of a dove. This is the symbol of the Holy Spirit. When the Cathedral was officially made a Basilica by the Pope in 2005, it was then renamed the Cathedral Basilica of Saint Francis of Assisi.

Restoration of the Basilica was done during 1986. During this time, new doors were constructed for it. Each one of the doors was made with ten bronze panels. Each of them illustrates an important event during the history of the church and its history in Santa Fe.

This is the center of the nave in the Cathedral. It was constructed from Brazilian granite. It was formed to have eight sides. The baptismal font was designed to represent Easter or the eighth day. It is meant to mark God's new creation of the world through the resurrection of Jesus Christ. At the basin of the baptismal font is a cruciform. It has three steps. This is meant to depict the three days between the crucifixion of Jesus and the day of his resurrection. There is also a rill. It symbolizes four Evangelists who put out their own nets to capture men's spiritual needs. The rill is located between the altar and the door. This is meant to show the journey of a person's faith. There is also an Ambry Cabinet. This is where oils used during sacraments are stored. An Easter Candle stand can be found in the northern part of the church.

This is the patron saint of this diocese. In 1967, the statue of St. Francis of Assisi was placed at the Basilica during renovations. St. Francis of Assisi (1181-1226) was an Italian Catholic friar. His birth name was Giovanni di Pietro di Bernardone. His father was a wealthy silk merchant. He is known to have lived the life of a wealthy young man. There even came a time when he spent time as a soldier going off to war in 1204. During this time, he had a vision. This caused him to lose his desire to live a worldly life. He made a pilgrimage to Rome and went with the poor. He spent time begging at St. Peter's Basilica. After this experience, he chose to live a life of poverty. After this pilgrimage, he returned home. This was when he started to preach in the streets. In a short matter of time, Assisi had a number of followers. He created an Order that was granted authorization by the Pope. The Order of Poor Clares was founded. Traveling to Egypt in 1219, Assisi tried to convert the Sultan to end the Crusades. The first Christmas nativity scene was created by him in 1223. Assisi is the first recorded person to have the stigmata. This is a person who shows the holy wounds that were inflicted on Jesus during the crucifixion. St. Francis of Assisi passed away in 1226 and was proclaimed a saint by the Pope in 1228.

This chapel is a place that has been designated for prayer. A window was added to the chapel when renovations were done in 1986. Etched into the window's glass are images of the Apostles as well as the Holy Family. The depictions were done by the artist Andrea Bacigaluna. The chapel also has stained glass windows. These were created in France and designed to represent the Eucharist.

Location Of The Cathedral Basilica of Saint Francis of Assisi 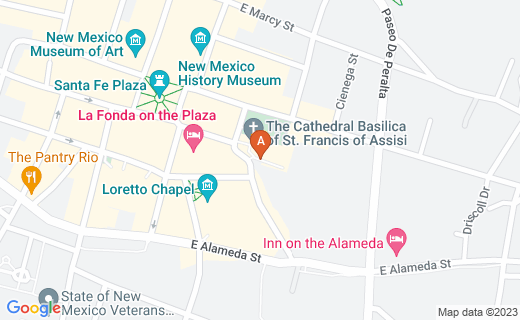