See The Mansion At Hartwood Acres

Located approximately 14 miles north of Pittsburgh is Hartwood Acres. One of the most impressive features of the park is a stunning Tudor mansion that was built in 1929. It has a public garden, a stable complex as well as a gate lodge. It was constructed for the original owners John and Mary Flinn Lawrence. The architect for the mansion's design was Alfred Hopkins.

The mansion at Hartwood Acres was built for Mary Flinn Lawrence. She was a well-known philanthropist from Pittsburgh. She built the mansion from money she inherited from her father, John Lawrence. Flinn was born in 1887 and was one of six children. She grew up in the Highland Park section of Pittsburgh. She attended Farmington School and then Briarcliff College. She was active in politics and championed women’s political causes at the time such as humane working conditions, women's suffrage and more. She also impressed people with her athletic abilities and horse riding skills. Flinn was also a good musician. On her 16th birthday, her father bought Mary Flinn a Steinway grand piano. Mary Flinn married John Lawrence in 1914. Their marriage ceremony took place at the Sixth United Presbyterian Church of Pittsburgh.

The architectural style of the Hartwood acres mansion is an excellent example of the architectural designs of the 19th-century. It is a 31-room mansion that is a classic Tudor style. Located inside the mansion are an impressive collection of original antiques from both England and the United States. There is everything from a 17th century Flemish tapestry, 19th century English chairs, an Aeolian pipe organ, two rare folding Georgian walnut game tables and more. There is also a hand-carved oak mantel made in the early 1600s that came from a castle in England. There is also a Bijar Persian carpet made in 1870 that has 1,000 knots per square inch. Many of these items can be seen in the mansion's great hall.

The garden beside the mansion is impressive. The Smithsonian Institute accepted some plants from the garden and trees from around the mansion into their Archives of American Gardens. The Smithsonian accepted formal and terrace as well as the perennial gardens. They also accepted a grove of hemlock trees located behind the mansion. The landscape and gardens located at the mansion were designed by two landscape architects during the 1930s. Ezra C. Stiles of Oakmont and Rose Greely of Washington DC planned and created them. The garden near the mansion also has Mexican sunflowers, zinnias as well as canna lilies and Victorian sage. Community service groups, as well as local volunteers, maintain the garden.

In 1909, Mary Flinn's father bought her an Aeolian pipe organ. It was a very popular pneumatic player piano during this time. The Aeolian pipe organ was invented in 1895 by Edwin S. Votey. It was taken out of the Highland Park home and placed at the Hartwood mansion in 1930. The pipe organ is located in the basement of the mansion. It is heard through panels in the walls of the Great Room. The organ is a semi-automatic player. There are over 460 rolls that can be used with the organ located in the Great Room and the mansion's library.

During their marriage, the couple did not have any children. Mary Flinn was 50 in 1937, and they adopted a three-year-old boy and named him John Wheeler Lawrence, Jr. In 1939, they adopted another three-year-old by and named him William Flinn Lawrence. Both of the boys the couple adopted came from England. John Lawrence passed away in 1945. Mary Flinn remained at the mansion, but she was severely injured in a car accident in 1962. The injuries she sustained restricted her activities for the rest of her life. The Hartwood mansion and property was sold to Allegheny County in 1969. A provision for the sale was that Mary Flinn be able to remain living at the mansion until her death. Mary Flinn Lawrence passed away on October 29, 1974.

In 1996, a large segment for the television film called “The Christmas Tree” was filmed at the Hartwood Acres Mansion. Some of the movie's scenes took place at the mansion's great hall. In 2011, a pilot episode for a 20th Century Fox TV adaptation of Joe Hill's graphic novel “Locke & Key” was filmed at the Hartwood Acres Mansion. In 2014 scenes from “The Fault in our Stars” was filled near the entrance to the mansion grounds.

Over the years, there has been a number of strange occurrences reported at the mansion. A documentary called “Ghost From Hartwood Acres” was made about them. The documentary features interviews with a number of people who say they experienced something unusual while in the Hartwood acre mansion. A member of a film crew shares the story of filming a scene outside the mansion when a large black cloud came out of the chimney during a hot summer day. Questions were asked about it, but the cause was never determined. According to the maintenance man, the door to John Lawrence's room slammed shut for no reason. He said he went back and propped open the door. When he went downstairs, the door slammed shut again with the door stop underneath it. A location manager for an independent film saw a photograph of Mary Flinn Lawrence in the gallery. He told people she was standing next to him when he was on the mansion's terrace. Mary Flinn Lawrence had passed away many years earlier. A volunteer claimed to be in a room where Christmas decorations were located. Suddenly a pair of scissors came out of a box and landed on a table.

In 1976, the mansion and Hartwood Acres was opened for public use. The park and mansion are located on 629 acres of land. It provides excellent hiking trails, biking and horse riding trails. It also provides a concert stage where a number of concerts are held during the summer months. Tours of the mansion at Hartwood Acres are available, and the mansion can also be used for weddings and other events.

OPEN: Year-round and closed most legal holidays – call to check if it is open. 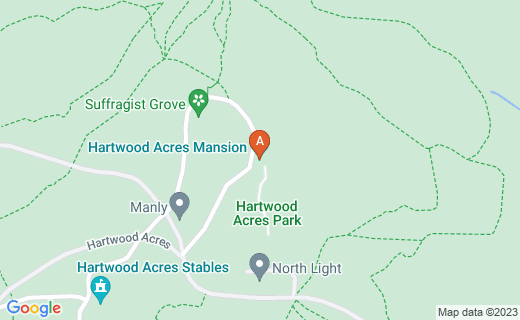