There is a special garden located in the Oakland section of Pittsburgh, Pennsylvania. It is known as the Rodef Shalom Biblical Botanical Garden. Every year over a 100 types of flowers, herbs, shrubs and other plant varieties are placed in the garden. It is designed to showcase plants found in ancient Israel. The garden has a new theme each year. Plants are chosen for the garden that illustrate religious concepts and are appropriate for the year's exhibit theme.

The Rodef Shalom Biblical Botanical Garden was created in 1987 by Irene Jacob and her husband, Rabbi Walter Jacob. Both of them possessed an intense love of gardening. Irene Jacob lived in Tel Aviv for a period of time and tended a rooftop garden. Rabbi Walter Jacob's strong affection for nature began when he worked for the U.S. Forest Service. A job he held from 1946 to 1949 in Northwest Montana. His work consisted of treating diseased trees as well as fighting fires. After this work, Rabbi Jacob spent time at a Jewish camp in South Carolina as a nature counselor. In 1986, the Jacobs co-authored a book titled “Gardens of North America and Hawaii: A Traveler’s Guide.” Prior to writing the book, they visited thousands of gardens around North America. They created the one-third acre Biblical Botanical Garden at Rodef Shalom in 1987. Rabbi Jacob was the senior rabbi at Rodef Shalom from 1966 to 1996.

Walter Jacob was born in Augsburg, Germany in 1930. He came to the United States in 1940. He was ordained by Hebrew Union College in 1955. After ordination, he became the assistant rabbi at Rodef Shalom Congregation. Jacob served in the U.S. Air Force as a chaplain between 1955 and 1957. In 1998, he co-founded of the Abraham Geiger College. This college is the first rabbinic seminary opened in Central Europe after the Holocaust. He became senior rabbi at Rodef Shalom Synagogue in 1996. He has published more than 43 books including gardening books with his wife, Irene.

She was born in 1928 in Germany. She and her family left Germany in 1938 to avoid the Nazis. The family lived for a period of time in London and then moved to Israel and lived there for ten years. During this time, she worked as a radiologist. In 1958, Irene was on vacation in Italy. She met the assistant rabbi at Rodef Shalom Walter Jacob. Irene and Walter were married that year and moved to the Pittsburgh Area. Irene Jacob passed away in 2012.

Plants In The Garden

The planning of the garden's theme and choosing what plants to be used takes place a year in advance. Walter Jacob does this task using a large library of books and other resources he has at his home. When the planning is done, he tries to find specialized articles about the plants used in the garden. This information is included with educational materials provided to visitors. Many people come to visit the garden each year, but church groups, and bus tours also stop to see it. The plants cover a diverse landscape that include a waterfall, stream, and a desert area. This is done so it corresponds with the types of plants that grow in the different regions of Israel.

The Rodef Shalom Biblical Botanical Garden is dedicated to the study of ancient Near East agriculture and horticulture. The goal is to make this knowledge available to the public using a number of annual plantings and programs. During the summer months, various aspects of ancient life are displayed with the introduction of up to thirty new plants. Each of them has a theme. People often return each year to see the new plants provided in the garden. Part of the garden is always dedicated to its current theme.

A theme for the Rodef Shalom Biblical Botanical Garden was illustrating the idea of paradise. The goal was to show the concept of paradise as displayed in Islamic and Christian art and theology. Within the garden, two small sections of the garden were dedicated this goal. Rabbi Walter Jacob did not plant a garden showing the Jewish concept of paradise. The reason was his inability to find any illustrations of the concept within Jewish art. There is also no detailed descriptions of it in Jewish writing. The Christian and Muslim religions have a wide variety of art and writings covering the subject of the afterlife and paradise. The Christian and Islamic section of the garden was inspired by small copies of paintings displayed as part of the exhibit. Jacob limited the garden exhibit to the plants that bloom in spring, summer and fall. Some of the plants used were common during the time of the Renaissance. The part of the garden used to show Islamic paradise was dry and had plants that thrive in warmer climates. It also had semitropical plants that were common in Islamic gardens. This area had colored tiles as does some Islamic art.

This temple building is a National Register of Historic Places Landmark. It is home to the oldest Jewish congregation in Western Pennsylvania. It is also the largest Reform congregation in the Pittsburgh area. The original Rodef Shalom Congregation was formed from approximately twelve residents who created a burial society known as Bes Almon. The society bought land in the Pittsburgh area to use as a cemetery. In 1848, the organization rented a room in downtown Pittsburgh and became a congregation known as Shaare Shemayim. In 1852, the membership split and some members formed the Beth Israel congregation. In 1860, the members of both congregations joined to form Rodef Shalom. It had over thirty member families and more than forty pupils in its school. It's first Jewish confirmation occurred in 1862. President William Howard Taft visited the Rodef Shalom Temple in 1909. This was the first time a sitting U.S. president ever spoke to a Jewish congregation during a Temple's Sabbath services.

Biblical Botanical Gardens are created with plants mentioned in the Bible. The Biblical Botanical Garden Society (BBGS) has a goal of advocating the creation of biblical botanical gardens around the United States. This includes biblical gardens created at places of worship or property owned by individuals, and others who have an interest in creating such a garden. The BBGS is dedicated to sharing garden ideas, plans seeds, botanical information, projects and many other types of information. It enables the learning on the subject of planting and nurturing a biblical garden. 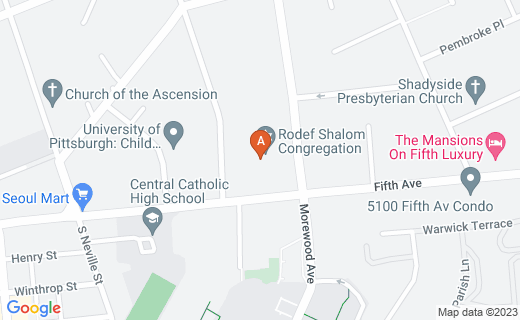