Anyone who visits Toronto is able to see the impressive CN Tower from almost any location in the city. It is a structure that is over 1,800 feet high. It was the tallest tower in the world for more than 33 years. The CN Tower remains the tallest free-standing structure in the Western Hemisphere. In 1995, the CN Tower was recognized as one of the Modern Seven Wonders of the World. This classification was awarded by the American Society of Civil Engineers. It currently holds a second-place ranking with the World Federation of Great Towers. It is the most noticeable structure in the Toronto skyline. The CN Tower has restaurants, a retail store and more. It attracts millions of visitors from around the world every year.

The CN Tower started as an idea with the Canadian National Railway in 1968. The goal was to build a huge platform to enhance radio and television communications in the Toronto area. It was believed that building such a tower would show the well-developed abilities of Canadian Industry as well as the Canadian National Railway. There were a number of different plans created for the tower, and they were all improved during the next few years. In 1972, the CN Tower became and official project. It was initially intended to become a large development south of front street known as Metro Center. It was intended to be on Railway Lands. The tower would then have been a large railway switching yard. This idea became obsolete when additional modern switching yards were built outside of Toronto. The structural engineers for the CN Tower project were John Andrews from NCK Engineering. Architects were Webb, Zerafa, Menkes, and Housden.

The construction of the CN Tower started during February of 1973. The first step was a huge excavation at the base where the future Tower would stand. This was done to create its foundation. When the excavation was finished, over 55,900 tons of dirt and shale had been removed. The excavation was over 49 feet deep in the center. The creation of the base required more than 9,000 yards of concrete to be combined with over 449 tons of rebar and 35 tons of steel cable. It took approximately four months for the foundation to be complete. During this time when the Tower was being constructed, it had concrete constantly being poured by a team of over 1,500 people for more than a year. All of the concrete utilized for the construction of the CN Tower was mixed on-site. This was done to maintain batch consistency. The top portion of the tower was completed during April of 1975. It was officially opened to the public during June of 1976. The CN Tower required over 25 months of construction to complete.

The name CN originally was in reference to Canadian National. This is the railway company that is responsible for building the tower. The CN Tower was transferred to the Canada Lands Company in 1995. They are a real estate development company. The daily reference for its name is the CN Tower. It has also come to mean Canada's National Tower as well as Canadian National Tower.

In the beginning, the CN Tower used incandescent lights to provide night-time lighting. This method proved not to be very cost-effective as well as inefficient. It also required a lot of repairs. Over 1,300 super-bright LED lights were installed in 2007. They were placed inside the elevator shafts, up over the Skypod and installed up to the top of the tower's mast. The CN Tower is now lit from dusk until 2 am. The scheme of lighting is often changed. It has been used to acknowledge major events such as the 95th Grey Cup. When Nelson Mandela, the former president of South Africa visited Canada, the CN Tower lights were in the colors of the flag of South Africa. When the Paris attacks occurred in November of 2015, the CN Tower lights were lit in the colors of the French flag.

One of the first things a person experiences at the CN Towers is the Lookout level. This is reached after getting on one of the six glass-fronted elevators. Visitors will travel over 1,00 feet in less than 59 seconds in these elevators. The Lookout provides some stunning views of Toronto and the surrounding areas.

This attraction is for visitors to have fun walking on or crawling across. Some people sit on it, and others have jumped on it. Doing this is safe. Every glass panel is load tested each year to ensure safety. The floor is approximately 255 square feet of solid glass. It was designed to be five times stronger than what is required for a standard commercial floor. It is estimated the floor could safely handle the weight of over 34 moose. People are able to walk on the glass floor and see a view of over 1,100 feet straight down. Even people who believe they don't have any fear of heights can struggle with it. The Glass Floor is an experience that is not soon forgotten. Visitors at this level are also able to experience the Outdoor Sky Terrace and learn what the air feels like at this height.

This is one of the highest manmade observation platforms on the planet. It provides visitors with a stunning and unique view like no other place. To get here requires taking a separate elevator located at the LookOut level. Visitors will be traveling through the core of the CN Tower. They will be going more than 32 additional stories to reach the SkyPod and its interpretive exhibits. Visitors can learn exactly what occurs when the Tower is struck by lightning. They can also see a pendulum and watch how the Tower moves with the wind. When the conditions are just right, it's possible for a person to see as far away as Niagara Falls and New York State. Both are located over a hundred miles away.

This is an entertaining amusement. The Edge Walk is designed so thrill-seekers can experience a walk around the roof of the main pod located on the tower. People are able to be outside and experience being over 1,100 feet in the air. The Edge Walk is the highest full-circle walk in the world that is done hands-free. Individuals who do this are tethered to an overhead rails system. They are able to walk safely around the edge of the main pod of the CN Tower. The Edge Walk is closed during the winter season. It is also closed when there are high winds or electrical storms. 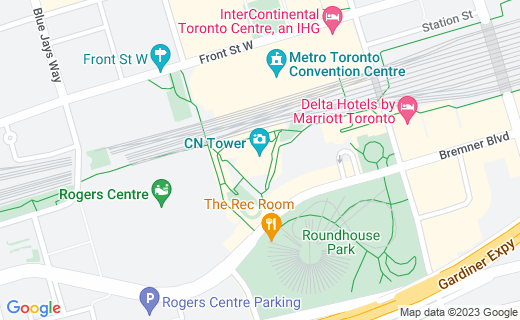