Mt. Moriah Cemetery and a Possible Haunting by Seth Bullock

On a recent road trip, I headed to Deadwood, SD. Yes, the same one that is the namesake of the TV show.

I only had an afternoon, so I had to pick the most interesting places to visit. Mt. Moriah Cemetery topped the list.

The cemetery is just above the town.

It has a number of different sections, each with different characteristics. There are potters fields with unknown graves, overlooks, and a number of notable figures from history.

Mt. Moriah wasn't the first cemetery in Deadwood. The first one was Ingleside Cemetery. Most, but not all of the folks buried there would be relocated to Mt. Moriah.

To this day, sometimes residents who live in where the former cemetery was say they sometimes come across remains when they're remodeling.

It was a most unusual tour, culminating with a possible encounter from the town's famous sheriff.

Where is Mt. Moriah in Deadwood? 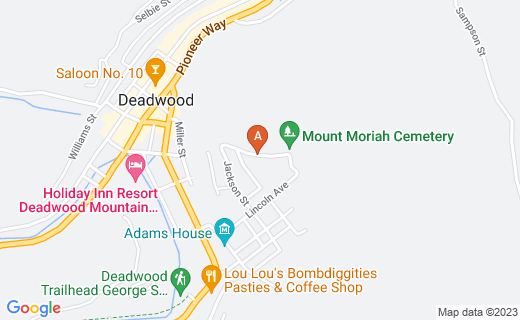 3,400 people are buried at the cemetery above Deadwood.

When I arrived, I purchased a pass from the ticket booth. In 2016, ticket prices were only $2 per person. For that we got a newspaper filled with information about the cemetery.

We began our tour over by the sections called "additions," which were added after the cemetery itself opened.

The road overlooked a forest and it was a little sad to see one of the three potter's fields. The people buried in these fields are unidentified.

I walked by a number of sections, but one of the first major stops was the Brown Rocks Overlook. The town of Deadwood sits in the valley below.

The elevation, surprisingly, is only 4802 feet.

A US flag always flies above the cemetery. It took an act of congress to allow the flag to fly 24 hours a day.

I continued the tour and saw the gravestone of Hui Ta Mei-fen.

He was a Chinese man who had some influence in the town. In fact, Deadwood had a small Chinese immigrant population, but when they died, they usually just had a wooden headstone.

Sadly, once the tour passes Mei-Fen's grave, the Children's Section and Mass Grave come next.

Like many other towns at the time, many children came down with a number of diseases, including scarlet fever, diphtheria, and other ailments.

The mass grave includes people who were victims of mining and lumber mill accidents.

Fire was a huge problem, too, in Deadwood itself. Sizable portions of the town burned to the ground on at least three different occasions.

Seth Bullock was Deadwood's first sheriff and he was quite popular. In fact, his grave is located where it is because he wanted to face Mt. Roosevelt as the two had been friends.

Bullock was originally from Ontario, but eventually settled in Deadwood with the hope of striking it rich, like nearly everyone else who went there.

He left his wife Martha behind in Michigan while he scoped it out for safety.

Interestingly, he got there one day before the famous Wild Bill Hickok was shot in the back and killed.

The town demanded law and order and it was Bullock who took the job. He was level-headed and clever and devised creative ways of dealing with outlaws, strikes, and other issues that arose in the town.

It was while Bullock oversaw the town that he happened to run into Theodore Roosevelt who had been on his own mission to capture a fugitive.

At the time, Roosevelt was a Deputy Sheriff. Having much in common, they struck up a friendship to the point where Roosevelt would send his sons to stay with Bullock's family in the summers.

Before he died, he requested that he be buried above Mt. Moriah and facing Mt. Roosevelt. Bullock had built a monument to Roosevelt in honor of his friend after his death in 1919.

Interestingly, workers completed the project in July of 1919 and Bullock died two months after that.

The Road to Bullock's Grave

A View on the way up

Seth Bullock tapped me on the shoulder!

I opted for the walking tour (which I recommend - you can take your time to read the gravestones and look through the cemetery newspaper for interesting facts), and walked up to Bullock's gravesite.

It's 750 ft above the rest of the cemetery. My only regret was that I didn't bring more water. It's like climbing nearly eight stories!

He's buried there along with his wife Martha.

Little rocks,stones, some coins and little bits of glass decorate his grave. These signify that someone had visited his grave and put them there as little tokens of remembrance.

I walked around to the front of his grave and did my own remembrance for a famous man who did so much for the town of Deadwood.

But when I was about to leave, I was walking out of the little gate and felt something tap me on my shoulder. I looked for a little bug or a leaf - anything - that would have been heavy enough to feel like the tap of a finger.

I saw nothing. Immediately I looked back toward Bullock's grave and got the sensation that it was he who had tapped me on the shoulder.

I hadn't been scared. I just smiled and told him and Martha "thank you" for letting me visit and possibly reminding me to enjoy life and to take it easy.

Walking back down to the main part of the cemetery, I made sure to stop at the gravesites of these two awesome characters from history.

Calamity Jane is really Martha Canary. She grew famous probably due to being orphaned when she wasn't very old and had to find her way in the Wild West.

She had many adventures - some more seedy than others - and wore men's clothing to possibly help her as she did business as a scout, and worked on a bull train.

For her tough exterior, she did help nurse folks back to health, even risking her life by taking care of people during the smallpox epidemic.

But, if you've seen the show, you might recall her as an alcoholic. She died young, at age 47, or close to it. Some say that she loved Wild Bill Hickok and never quite recovered after his death.

Her grave has a gargoyle on it, a symbol of her friendship with Dora Dufran who was a madam and oversaw quite a few brothels in Deadwood and surrounding towns. She knew Calamity Jane from letting her work as a maid.

Who's Your Favorite Character From History?

James B. Hickok, aka Wild Bill

This poor fellow was murdered from behind at Deadwood's No. 10 Saloon in 1876 only a couple months after arriving in Deadwood. The culprit? Jack McCall who would later be tried and hanged for Wild Bill's murder.

Wild Bill, they say, had an uncanny aim and a talent for using two guns at once. He was able to shoot equally well with both hands.

He'd been married - the same year he'd died, actually - but Calamity Jane always liked to say that they had "a thing."

Three years after he died, townspeople disinterred his body from the first Deadwood cemetery and relocated him to the newly established Mt. Moriah Cemetery.

Wild Bill was known for being extremely calm in any situation which served him well in his adventures as a scout, and Deputy US Marshal, spy and sharpshooter. He was even involved in a pistol duel...which he'd won.