A Community of Grand Homes

A Charming Bit of the Past Recast

Such luminaries as Paul Newman, James Frey, Roger Penske, Fred Willard, Molly Shannon, Jim Brickman, Greg Pruitt, Jr., and even, supposedly, the Beaver’s dad, Ward Cleaver, all hailed from this leafy streetcar suburb east of Cleveland. No wonder — as it is one of the most charming cities in the U. S. within which to grow up.

This residential community began in 1822, established by about 80 settlers of the North Union Settlement of the United Society of Believers (perhaps referred to as Shakers for the tremors experienced by the faithful under possession by spirits). Damming Doan Brook, the congregation created the Shaker Lakes, and established both a gristmill and sawmill, enabling it to grow to several hundred people. However, as the sect practiced celibacy, it was doomed to extinction, and the settlement disappeared by about 1890.

Light Rail as a Spur to Growth

Within a decade, the entrepreneurial Van Sweringen brothers bought the settlement’s land to develop a garden suburb. The brothers then purchased the Nickel Plate Road railroad system, in part to provide rights-of-way for what would become the Shaker Heights Rapid Transit Line of light-rail streetcars.

The former Shaker Village was incorporated in 1912 and by the 1930s became a city. It has grown steadily, to a population of about 30,000, and is a racially, socially and demographically diverse community.

Employing planning principles espoused by the great landscape designer Frederick Law Olmsted, the Van Sweringens laid out most of Shaker Heights: its median boulevards, curving tree-lined streets, roundabouts, spacious home lots, and locations for churches, schools, civic and commercial buildings. One of their gems is Shaker Square, an octagonal traffic ‘roundabout’ and multi-street intersection populated by restaurants, retail shops, a cinema, and a bustling transit station. Roughly 3/4 of the city is today recognized as the Shaker Heights historic District by the National Register of Historic Places. 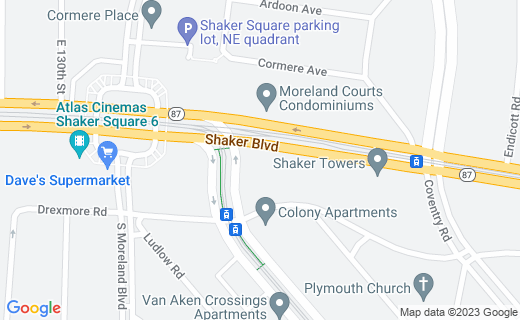 Much of the vicinity of Shaker Square and the corridor of Van Aken Boulevard are populated by grand old brick-and-stone apartment and condominium buildings, featuring such delights as oval rooms, carved stone ornamentation, timbered ceilings and leaded-glass windows.

Shaker Heights is also renowned for the quality of its public education, as well as that of its private schools of Laurel School, Hathaway Brown, and University School. The city is also served by the many arts, cultural, university and medical institutions of nearby University Circle.