Tourist Spots in and around Shimla

Shimla happens to be the Hill Station which I frequented most, both in personal and official capacity. This hill station is embedded into my psyche since childhood when grannies used to remind children of its existence by every current of cool breeze enthusing life in otherwise plain and hot area of Punjab where I was born. I visited it with friends, family members, in different seasons and with different sets of mind, but each time it looked enchanting and reminiscent of British legacy. The last visit was about a year back but I am not tired of rushing to this place whenever I get next opportunity. The very idea of a visit brings in a flashback of this place and makes me nostalgic too.

I thought of using HubPages as a platform to share reminiscences of some spots which I visited at picturesque Shimla (Earlier spelled as Simla).

Shimla is different from many other hill stations because it still retains the colonial heritage. It is a destination for many tourists from India and other countries almost all the year round and is known as 'Queen of Hills'. Apart from the climate which is mostly cool, scenic beauty and existence of many attractive spots around it, its popularity had a boost due to its accessibility by train.

Journey by Toy Train can itself be a source of enjoyment for those who don't have time constraints. A meter gauge (narrow) track covering 96 kms between Kalka and Shimla is an unforgettable experience. Children certainly love such a journey which is an up and up experience of curves, tunnels, bridges and hill views mostly on the right side for upward travel in a slow 5-hour journey. It has different types of coaches including Deluxe class.

Many tourists prefer slow journey because of the thrill they have by travelling in a Toy Train on narrow gauge and experience hide and seek every time the train enters and comes out of a tunnel. There are 102 tunnels (initially there were 107) and 864 bridges en route. Slow journey is not tiring but entertaining.

This is the main attraction of Shimla for strolling, eating and purchasing. Free from vehicular traffic, the evenings are full of local people as also of tourists. Often locals are recognised the way they dress up and the ease with which they move. Tourists look more busy in shopping and those who are not habitual of walking on foot get tired. The main attraction on this road is Himachal Emporium having local handicrafts including pottery and jewellery items. There is a treasure of old books which many tourist purchase at reasonable cost. Scandal Point marks the end of the Mall road.

One wonders why this spot is named like this. It has a supporting story. Lacking authenticity, the lore is that the then Maharaja (King) of Patiala kidnapped the daughter of Viceroy of India while she was strolling at this place. The end result was banning entry of the King to this Hill Station.

But I feel this point assumes significance because of some other considerations as well. Apart from the end of The Mall, it happens to be the highest point on this road. I will call it even a focal point as it leads to the famous Ridge and the nearby Church. There is a magnificent building at the corner housing the office of Municipal Corporation, The Police Headquarters and Fire Station. The Post Office is also nearby. Crossing this point you will find a different type of Shimla, the rush of tourists suddenly looks withdrawn. Nearby there is a statue of Lala Lajpat Rai who sacrificed his life in the freedom struggle against the British. You may refresh yourself after treading the long Mall and have a cup of coffee or Indian and Western food at restaurants on the left side.

A policeman with very smart turn out will be found guarding this place but the tourists are allowed to have a quick photograph near the canopy on the Spot. Anybody visiting Shimla will not return without visiting this Spot.

Turning to the right from the Scandal Point there a vast space called The Ridge. Tourists are seen taking rest after they get tired on treading the Mall. There is a short cut to reach this spot which is normally used while returning. At the other end is the famous Christ Church. This spot also has statues of famous Indian leaders like Mahatma Gandhi, Indira Gandhi and Dr. Y. S. Parmar.

The spot is also known for gatherings and celebrations like the Summer Festival. There is a huge platform where voluntary musical performances are done. The tourists can also sing here if they want. On the left there is a telescope fitted to see the farthest range of snow-clad mountains. Tourists also wear different local dresses and get themselves photographed. Since this spot is almost at the top on this part of Shimla, there is a cool breeze blowing which tourists enjoy while relaxing. It is full of tourists in the evening.

During winter specially nearing Christmas there is snowfall at Shimla. The Ridge continues to be a spot for enjoyment even when it is snow clad. There used to be snow fall on Christmas. Unfortunately, it has been missing the date for some years now but this year was exceptional with lot of snow at and around Shimla.

The Christ Church Inside and during winter

If somebody has to name a landmark building in the heart of Shimla, the only answer will be Christ Church. It continues to be the most prominent building towards the upper end of the Ridge. Built in 1857, it is the second oldest church in northern India but is very well maintained. Visible from miles away, its night view really enchants every tourist and it serves as a Lighthouse at Shimla.

Inside view and the view in winter during snow fall are remarkable.

This magnificent building bears the burden of history. The then Viceroy of India had it at a strategic location with all amenities including electric light which was not even heard of at that time. This grand building had huge kitchens used for entertaining the Princes and Nawabs of that time and it even had an indoor tennis court.

After partition of India in 1947, the building was used as a summer retreat for the President of India. Dr. S. Radhakrishnan, the then President of India handed it over for housing Indian Institute of Advanced Study in mid-60's and is being used by scholars for advanced multi-disciplinary research (mostly post-doctoral). Many renowned scholars including Aung San Sun Kyi, a Noble Peace Prize Winner, was a Fellow here in 1986.

A part of the building is open for public as a guided tour. During my last visit I had the privilege of observing discussion by scholars (without participation as I and others were put to silence mode). The Ballroom of the building is now a Library used by the Scholars.

Efforts to covert it into a Hotel was thwarted by public opinion.

But it continues to be one of the most attractive spot for the tourists visiting Shimla.

Tourists interested to see the rich cultural heritage of Himachal Pradesh must visit State Museum situated at Chaura Maidan Road. There is a huge collection of paintings depicting the life and culture of Hills. A good number of sculptures, some as old as eighth century, are placed in this Museum. Other items of interest to tourists are coins, dolls specially bride and bridal dolls and local handicrafts. There is a Library with historical books and manuscripts.

Many sculptures depicting different periods of the history are placed in this Museum. Local costumes used in different parts of the Himachal Pradesh are also displayed here.

Peeping through clouds, the Christ Church and the surroundings look magnificent during night.

Quite often tourists are confronted with monkeys especially near religious places and also while strolling at The Mall. Sometimes they experience sudden snatching of eatables or packets in their hands if they are oblivious of monkeys on the roof tops or trees. But they won't harm the tourists and the best way to tackle such situations is to carry some eatables with you and offer them on such occasions.

I remember once a monkey snatched the spectacles of a tourist. He tried to get it back but did not succeed. A local person gave the tourist a banana and suggested to offer it with give and take gesture and the monkey obliged. It is better not to tease them and also not to disturb them when they are taking rest. Some tourists purposely feed them to watch them closely and amuse themselves. Humans and monkeys have coexisted since long.

Having satisfied their hunger the monkeys are taking rest. Let they not be disturbed and you may enjoy your eating and drinking uninterrupted in the mean time. No monkey business, please.

The beauty of Shimla is that there are many spots in the near vicinity and the tourists can enjoy these spots during the trip to this hill station. Two of the popular spots are mentioned here.

Places of Interest: Wild Life Zoo where Rare Antelopes, Felines and Birds can be seen. State bird of Himachal Pradesh, Himalayan Monal is also available in this mini Zoo. There is Chini Bunglow displaying statues and architecture.

It attracts tourist both in summer and winter, but winter is more enjoyable here when some tourists enjoy skiing.

My only regret about this most scenic spot around Shimla is that even in winter I failed to visit it during heavy snow to watch winter adventure sports.

Direction: On road from Shimla to Naldehra

Places of Interest: Known for Golf, this spot has the oldest 9 hole golf course in India. It has enchanting surroundings with tall deodar trees all around this site. Considered to the the most challenging golf course, It looks so magical and relaxing place. There is Nag Temple and the spot has derived its name from it.

Lord Curzon, the British Viceroy was attracted by the landscape of this place. He adopted this name for his daughter. It continues to be one of the most peaceful place near Shimla.

While Naldehra is a great picnic spot, tourist can go further by about 5 kms. to reach another spot called Tattapani which is having sulphur spring at the bank of river Sutlej.

Your acquaintance with Shimla

Have you heard about Shimla? 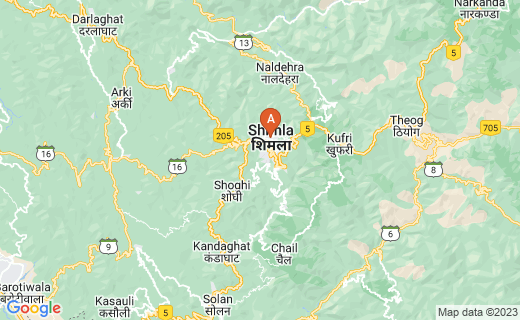