Shiprock is a natural rock formation that rises some 1500 feet above the land, surrounding it. The massive rock structure is located in northwestern New Mexico less than 15 miles from the town of Shiprock. The rock sits on the eastern edge of the Navajo Reservation, the largest in the U.S. The current name comes not from the Navajos, but from the early settlers, who first glimpsed the monolith from afar and pictured the rock as a mighty sailing ship crossing an ocean. 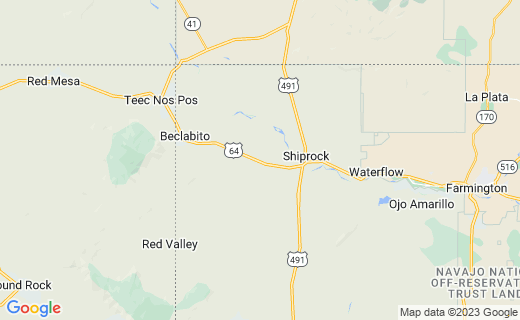 To a geographer or an earth scientist, Shiprock could be called a monadnock. This Native term from the Northeast simply describes a hill, butte or mountain that rises high above a flat stretch of land. There is no reference to the geological process that created this monadnock, only that it exists.

Put a geologist on the scene and right away he will begin studying the situation for clues as to how the rock extrusion. was formed. With Shiprock, it would quickly become clear the rocky tower is of igneous origin. The scenario here is that long time ago, liquid magma from the core of the earth, pushed upwards through sandstone until it reached the surface.

Once the magma solidified, it proved more durable than the sandstone. So after many millions of years, the sandstone weathered away, while the igneous tower remained intact shaped by minor erosion.

At present (5/2017), the Shiprock natural formation is open for visitation by anyone driving across the Navajo Reservation. Just keep in mind that the sacred rock is very important in the worldview of the Dine' Nation, so be respective and stay near the highway.

When I visited the place, this spring, I obtained a ride from a man, who lived in the nearby town of Sweetwater. He was going right by the rock pinnacle, so he dropped off at a dirt parking lot, located on the Indian Service Road that passes a few miles south of Shiprock; and when he dropped me off and after asking if I was afraid of rattlesnakes, he told me the best place to camp for the night.

During the few hours that I spent there, several visitors appeared in pickup trucks. One pair had with them a drone with a camera, as they were busy making a short video of the rock tower. And then the next morning a photography workshop was gathering along the Indian Service Road, just as I was leaving on my bicycle and returning to the town of Shiprock, located some fifteen miles away.

Finding Shiprock is simple. From the town of Shiprock head south on New Mexico State Highway 491 until you come to Indian Service Road 13. Take this paved road west. At this point, the Shiprock will tower high to your northwest. From here, just follow the road until you come to a long rocky ridge that crosses the desert like the Great Wall of China. You will encounter the unmarked parking lot, just before you pass the natural rock wall.

Shiprock was first called The Needle by Captain J.F. McComb in 1860. Capt. McComb was an explorer, who placed Anglo names on many of the region's landmarks. Within 10 years, The Needle was replaced by Shiprock, which is still in use today by the general public. To the 19th century traveler and pioneers, who traveled through the area, the rock formation closely resembled a clipper ship, which were in common use at the time along both seacoasts. In fact, if you stand at the side of the paved road that passes south of the big rock at sunset, it is possible to visualize the resemblance.

To the Navajos Shiprock is called Tsé Bitʼaʼí, which roughly translates to mean "winged rock" or "rock with wings". There are many legends associated with this rock, including one, where the top of the mountain was home to some Dine' families, who would come down from the peak to plant their crops and gather water. Then a storm came up and sheared off the mountain, so no one could leave. Eventually, all who lived on top of the mountain died and now haunt the summit.

What Will Become of Shiprock?

Shiprock isn't going anywhere, but the way that the Navajo Nation administers the site may be changing. This process began in 1939, when Shiprock was climbed for the first time by a group from the California Sierra Club. This adventure was successful, but later attempts lead to at least one fatality and the eventual closing of the mountain in 1970 for climbers.

Today, visitors are discouraged from approaching the rock tower close up and are asked to stay near the paved Indian Service Road that passes to the south of the rock, where there are some unique rock formations worth exploring.