New York City is one of the most popular travel destinations in the world. People travel to New York for many reasons, some of them for business, some of them for sightseeing, some of them for culinary experiences and some of them for shopping. Lately, thanks to weak US dollar, more and more tourists from Europe and Asia come to New York to shop. And the city is trying to meet their expectations and measure up to Paris and Milan by opening a variety of new stores from upscale designer's boutiques to friendly small shops to big shopping centers. Indeed, Manhattan shopping scenery has changed a lot for last seven years. And if you are one of those who travel to the city for incomparable New York shopping experience, then here are some tips for you where to shop in New York City.

Luxury shopping in New York is very easy to find, just stroll down Fifth Avenue from 59th Street to 49th Street, or go up on Madison Avenue from 59th to 81st Streets, walk across town on 57th Street from Lexington Avenue to 6th Avenue or take a ride to SoHo and Meatpacking district. Those are major areas where all upscale designers' stores and boutiques located. You will find all the names here from Prada to Alexander McQueen to Emilio Pucci to Chanel to Hermes. Plus, here there are five major department stores Henry Bendel, Barney's, Saks, Bloomingdale's and flagship of all luxury stores - Bergdorf Goodman. Fifth Avenue shopping offers plenty of exclusive famous stores and boutiques including Tiffany's, Harry Winston, Cartier, Saks Fifth Avenue and etc. And even if you are not into shopping for luxury goods, still, here are Fifth Avenue stores you must visit when in New York - at least to take a look!

"Bergdorf Blondes" by Plum Sykes, a guide to the glamorous world of Park Avenue girls who careen through Manhattan in search of love

Bergdorf Goodman is not only a department store, but one of the city's landmarks. You can not leave New York without at least a short tour in a store. Exclusive collection of jewelries and accessories; selection of designer handbags, shoes and clothes; gift and antique offerings; luxurious beauty products; top notch salon-spa and dining options. If you don't have the budget for Bergdorf's regular prices, the store's end of season sales can offer huge savings. No matter what your budget is, if you appreciate beautiful items, you would love sophisticated atmosphere of this glamorous store and the views of Fifth Avenue and Central Park from the top floors.

FAO Schwarz has come a long way to become a New York attraction from a toy shop opened in New York City in 1870. Toy Shopping at FAO Schwarz is unparalleled experience for both children and adults. An incredible selection of toys; many interactive activities, such as a dance-on piano; board games and sci-fi merchandises; collectibles and sporting equipment - it is practically impossible to leave the store without buying anything.

Apple Store is a relatively new landmark of Fifth Avenue. The store itself is all underground except for the entrance, a 32-foot glass cube right opposite of the Plaza Hotel. With this incredible entrance, distinctive glass elevator and stairs, the store is a very attractive and distinguished destination on Fifth Avenue shopping scene and a perfect break from clothes shopping. Opened 24 hours a day 365 days a year, the store offers more than 100 Macs and nearly 200 iPods that you can try before you buy, as well as the world's largest assortment of accessories.

If you are a reasonable person and don't want to spend unreasonable amount of money on luxury goods, then there are plenty stores in New York City which offer casual wear. One store probably has to be mentioned especially here - Macy's Department Store, one of New York City most famous icons of shopping. Being one of the world largest and oldest department stores, Macy's offers about half a million items for sale, including some the big brands, such as Guess and Esprit, DKNY and Calvin Klein. If you are happened to be in New York in the spring around Easter time, Macy's is the place to visit and not only for shopping. For two weeks Macy's holds the famous Flower Show, when the entire store is decorated with flowers from around the world.

For trendy and avant-garde wear go to SoHo or Meatpacking District, where plenty of stylish stores offer designer clothes from big names to young designers, stylish home goods, jewelry and chic beauty products. Once, SoHo was a neighborhood of artists and art galleries with probably just a few fashion spots, but now it's a real shopper's paradise. With some upscale names such as Max Mara, Chanel, Louis Vuitton, SoHo shopping scene is an array of designer's lines from Catherine Malandrino to Diesel to Agent Provacateur. Modern furniture and antique shops, lingerie and handbags - you easily can spend all day browsing unique SoHo's stores and shops.

Meatpacking District, just about 15 minutes walk from SoHo, is the newest on a shopping arena of Manhattan, and with no doubts the trendiest. With raw of designer's names along 14 Street (from Alexander McQueen to Shelly Steffee), this formerly famous for its slaughterhouses neighborhood, is one of the most popular shopping destinations in New York. The trendiest department store of New York City - Jeffrey, is also right here. With a wide range of labels, from Helmut Lang to Pucci, the store offers the full lines of fancy footwear for men and women: racks of Gucci, Manolo Blahnik and Prada, among others. 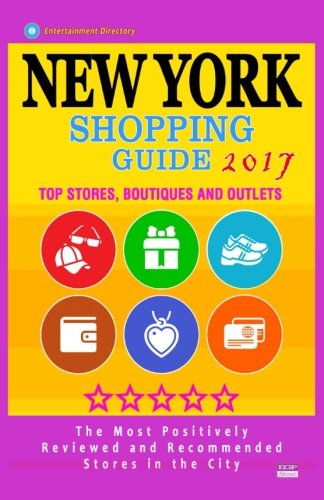 Certainly New York City is a real paradise for shoppers who seek expensive fashions and designs. But for those who look for a bargain, still, there are great discount opportunities here. There are stores you would probably love to visit if you are looking for some designer clothes at discount prices. Century 21, Syms and Loehmann's are major discount stores in New York City with prices 50-70% off regular retail prices, just make sure to check any purchases for tears and holes (sometimes it's a case). For those who don't mind knock-off designer items and fake Gucci bags or Rolex watches, Chinatown is definitely place to visit. Most of vendors are centered on Broadway and Canal Street intersection. If you want to buy some souvenirs to remember New York, Chinatown is also a great place for it. Here you will find a lot of t-shirts and souvenirs with prices much less than at souvenir stores on Fifth Avenue or Times Square. Have a great shopping time in New York City!