The harbour of Sibinek is located in the Krka River, where the outstanding blue waters of the Adriatic Sea can be seen. Yacht owners enjoyed the place because of its historic medieval Old Town and nearby Krka National Park.

Some places here were recognized by UNESCO, one of which is the town’s Cathedral of St. Jacov (aka St. James). It's unique construction techniques used to build the dome, interior and frieze made the cathedral outstanding. However, the frieze or the long stretch painting was not fully supported by their residents as they declined to contribute to its construction costs.

Moreover, Sibinek is not only rich in history, but also rich in culinary scene which includes fresh seafood, locally-sourced cheese and smoked ham and a lot more. Their Croatian cuisine with a contemporary twist at eateries such as Pelegrini is a must try too.

It was written in an official document issued by Croatian King Petar Kresimir IV that the small settlement beneath the original hilltop Fortress of St. Michael was during 1066. Between the 12th and 18th centuries, Sibenik was ruled by a succession of overlords, from Hungarian, Croatian and Byzantine to Venetian, Bosnian, Herzegovinian and Venice again. The Venetian rule finally collapsed in 1797 and the town was passed to the Austrians. The remaining part of the Austro-Hungarian Empire until the end of World War I.

The “Kingdom of the Serbs, Croats and Slovenes” was established in 1918. Dispute and outright civil war between the formerly independent territories continued for decades. Josep Broz Tito gained power towards the end of World War II. He ruled the place as Communist country until his death in 1980. Ethnic divisions continued to simmer, eventually Croatia declared its independence in 1991.

The Bosnian War between Serbs, Croats and Bosnians lasted until NATO interceded with the signing of the Dayton Peace Accords in December 1995. Thereafter, the local residents, the red-roofed seaside towns and the natural landscapes made Croatia as the Europe’s most inviting tourist destinations.

Krka National Park is named after the Krka River in Central Dalmatia, Sibenik. The park was intended for cultural, educational, recreational, scientific and tourist activities. It is the 7th National Croatian Park.

Below are Some Interesting Spot found inside Krka National Park.

Roški slap is a 22.5-meter high waterfall situated on the Krka River spring. It is commonly called “Vast Waterfall”.

Skradinski buk is the longest waterfall on the Krka River.

Krka Monastery or Holy Archangel is the Orthodox spiritual center on Krka River. A Byzantine style church was built next to the monastery which is open to the visitors.

Inside the Franciscan monastery are mural paintings and Venetian baroque paintings. The monastery became the principal shrine of St. Nikola Tavilić is a Franciscan missionary and the first Croatian patron saint. The courtyard of the monastery was designed in an irregular and elongated structure. The monastery also houses a 1374 Croatian literature and the oldest works, the “Sibenik Prayer”, all written in Latin script.

St. Michael’s Fortress is a medieval fort situated on top of a hill for about 70 meters above the sea level. Architectural remains and artifacts were recovered during the site excavations. The fortress was named after the oldest church ever built in Sibenik, the St. Michael’s church. It was also called as "St. Anne’s Fortress".

Cathedral of St. Jacob is an architectural heritage of the old town of Sibenik, Croatia built during the 15th and 16th century. It is the only structure in Europe built using 100% of stone and 0% of wood. The cathedral has Tuscan Renaissance style of structure.

The Baptistery of the Cathedral has a vault with angels, cherubs’ heads and head of God the Father. While the baptismal font has three naked boys carrying a sink. This sculpture was made by Juraj Dalmatinac, Croatian – Italian sculptor.

Trogir is a historical town and harbor in Croatia. It has been recognized as one of the World Heritage Sites by UNESCO. Structures here were designed in Venetian style.

The Trogir became one of the fastest growing port in Croatia. As a result, more and more lodging and shops were built to cater to the tourism needs of the place. A shipyard was built here in the early 20th century. 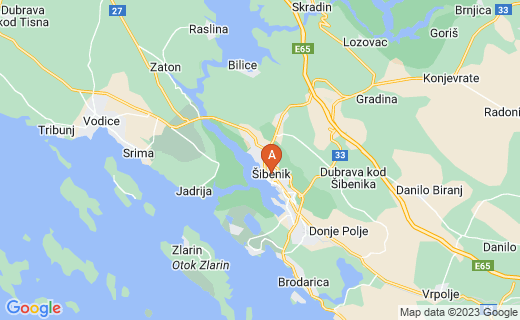