Traveling to Venice, one of the most romantic cities in Europe, is bound to be an unforgettable experience. Old squares, museums, monuments, cafés – you name it! Venice has got it all and there is so much to see and experience.

Venice has an incredible number of spectacular streets. You’ll need weeks to explore its beauty, history and breathtaking art. Still, certain sights have to be prioritized. Here are six of Venice’s most unforgettable places – the ones that every tourist should pay a visit to.

St. Mark’s Square is a central gathering place from which many of Venice’s attractions can be reached. According to historical documents, Napoleon himself called it “the drawing room of Europe.”
St Mark's Square was constructed back in the ninth century. Various cultures have left their mark on the square through the centuries. The main feeling it carries is that of the specific Venetian-Byzantine style that needs to be experiences first-hand.

While you are at the square, you will have the chance to see the Basillica San Marco with its impressive bell tower – Campanile di San Marco. The headquarters of the city's prominent political and religious leaders, the Doges Palace, as well as the government administrative buildings neatly outline the square.
After exploring those attractions, you can take some time to drink some refreshing Italian coffee at one of the local venues. Located near the waterfront, these beautiful cafés will enable you to savor the St. Mark’s Square atmosphere and feed the numerous pigeons.

Probably the best known tourist attraction in Venice, the Grand Canal, is a sight you shouldn’t miss. You can easily choose one of two options – either hop on one of the water buses (the Italian vaporetti) or hire a private water taxi to take you around. You’ll get to explore the entire city in a very exciting way and you’ll also end up taking beautiful dynamic shots.
Buildings along the Grand Canal take you on a journey through Venetian history. With more than 170 constructions dating from the 13th to the 18th centuries, you will certainly sense the tremendous heritage that this place possesses.

Despite the fact that it was rebuilt back in 1591, the Rialto Bridge still impresses with the original beauty of its impressive arches. Rialto Bridge is still in perfect condition centuries later and it happens to be one of the most recognizable local landmarks. You may have to get in line to take a picture but the experience is nonetheless unforgettable.

Its history is quite interesting. As Venice quickly developed into a world trade center back in the 12th and 13th centuries, a natural demand was created for the two banks of the Canal to be permanently connected. There’s another interesting fact about the bridge – Michelangelo was one of the creators considered fro the design of the construction. Historians haven’t found any solid evidence whether he really participated in the planning and the construction of the project.

The bridge has been rebuilt after almost burring down in the 16th century. Initially, the Rialto Bridge was made of timber but after the fire, it was fully reconstructed from stone.

Shopping lovers will find themselves in the right place on the upper curve of the Grand Canal. The largest open space in Venice after St. Mark's Square, San Polo district offers a variety of options for anyone interested in local products.

You can enjoy some of the locally-grown fruit and vegetables or take a walk down one of the tiny meandering streets. This is also a great chance for you to catch up and buy souvenirs for family and friends.

This is the northernmost Venetian district. Throughout the centuries, this region has been mainly inhabited by the working class. Today, it brags some interesting landmarks. While here, make sure to visit the magnificent temple of Santa Maria di Nazareth.

Accommodation options in this district as very affordable and they give tourists a beautiful view of the Grand Canal.
After you’re done exploring the main attractions, you may want to give some of Venice’s small and charming streets a try. These will show you a different view of the city, far from the noisy crowds and the large tourist groups. 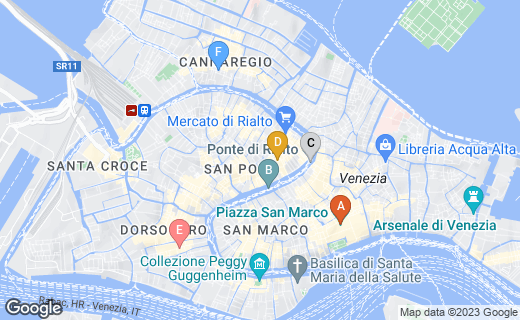