Rob is an avid traveller and self-confessed 'man of the world'. He is passionate about his home city, Manchester, & travelling the world.

Of all the things that come to mind when someone mentions New Zealand, one of the most common images has to be some form of extreme sports. Be it bungee jumping, white water rafting, jet boating, para-gliding or skydiving: New Zealand, and Queenstown in particular, is synonymous with adrenaline sports. And so when my girlfriend and I visited New Zealand recently we knew that we’d have to partake in at least one of these activities.

I was quite tempted by bungee jumping and had been ever since I was tempted to do a bungee jump whilst in Nepal not so long ago. However, I read too much into and decided it wasn’t for me. My girlfriend suggested skydiving. She’d ‘dove’ before in the UK from a height of 10’000ft but was relishing the fact that in New Zealand there is the chance to jump out of a plane from 15’000ft and even 18’000ft where you actually need to breathe from an oxygen cylinder. Ok, I said, I’ll give it a go.

As Queenstown in New Zealand's south island has the reputation for being the adrenaline capital of New Zealand, if not the southern hemisphere, if not the entire world; we thought it would be here that we’d do our sky jump. The setting is picture perfect. It really isn't hard to see, when you get here, why this place offers all of these many activities and why it’s so popular. The town and its surrounds are stunning: picture perfect even.

There is a magnificent lake surround by tall, forested green trees in the foreground and taller still snow-capped mountain peaks in the background. The river is gorgeous and winds its way through a number of impressive canyons that all hold many secrets from the gold-rush era. I was told that if you do a skydive in Queenstown you can even see the Franz Josef and Fox Glaciers from the air. However, there are so many tour operators based along the high-street in Queenstown that we found it hard to pick one that stood out. And so, we went on-line to browse the feedback of past jumpers and we found more and more people telling us that Queenstown wasn't the best place to jump. Nor was it the cheapest. All signs pointed to an area of the North Island called Taupo, set around the huge Lake Taupo. As we were heading up to the North Island next in our Camper Van Adventure we decided we’d go skydiving in Taupo instead. It also gave us more time to come to our senses and change our minds about parachuting!

Lake Taupo from the Air

So we booked a skydive at Lake Taupo through the website of a company called Taupo Tandem Skydiving www.taupotandemskydiving.com

We booked it with a couple of weeks’ notice so I kind of put it out of my mind for a while. But then as we started to get towards Taupo I started to feel a conflicting sense of excitement and dread. By the time the day of the skydive came around I would have told you I was raring to go one minute and then running screaming back to the car the next. I hadn’t felt so nervous for many years. I think I hid it well though.

Lake Taupo on the Map 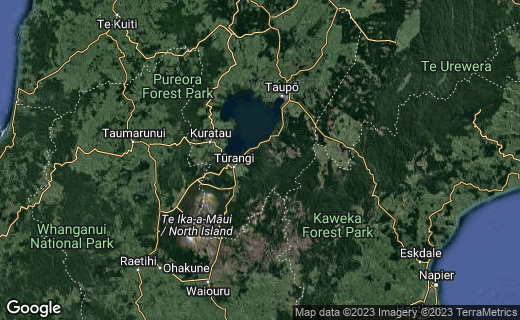 My tandem skydive partner, Brad, said I looked very chilled and relaxed. Brad gave me some information about skydiving, mostly about his accomplishments as someone who teaches people how to skydive and he also told me what to expect when skydiving in Taupo. Because we were going so high and because the North Island of New Zealand isn't so wide, Brad let me know that we would be able to see both the east coast and the west coast of the island.

Have you ever done a Skydive?

I got harnessed up and Brad fastened my harness to his harness. I hope you don’t mind me saying this readers but I was a bit worried about what would happen to my manhood when the parachute opened causing me to jolt up into the air. “These harness straps between my legs”, I quietly said to Brad hoping no one would hear, “do they not crush your balls when the parachute opens?” “Yeah a little bit”, replied Brad and with that he turned and guided me into our seats on the plane. There were 8 people parachuting out of our plane and I was to be about the 4th or 5th to go. It didn’t take long to get up to our full height and I have to be honest I was feeling pretty relaxed, even as the door opened and I watched the first to skydive exit the plane. Brad pointed out of the window towards a big volcano (the volcanoes of New Zealand are incredible!). He said that was the west coast of the north island and when we jump out he’ll point out the east coast. It was amazing being so high as to be able to see both coasts of the island and the same time.

It was my time for my skydive. We crawled forward together with our feet outstretched in front of us and I sat on the edge of the plane with my legs dangling over the edge. Brad pointed up above me and I looked up to see a camera pointed in my face. I think I tried to pull some sort of a smile and as I did so we left the plane. First thing I noticed was how cold it was. It was like being in a wind tunnel - a very strong, very cold wind tunnel. But then I soon ignored that I tried to absorb as much of the landscape and this situation as my eyes would allow. Brad was talking but I wasn’t paying attention, I was just awe-struck by this act of free-falling through the sky at so high a level. After what seemed like quite a while, but in reality was only 45 seconds or so, of hurtling towards Lake Taupo Brad pulled the parachute and our pace slowed. Brad talked as we made our way to the ground. I still wasn’t listening, although I guessed he was asking how I felt and so I told him the truth: I felt amazing!

I was on a high for the rest of that day. They gave us a voucher for a free drink at a local bar in town which I think I went and redeemed immediately and enjoyed a nice cold beer whilst I reflected on what I’d done that day. If you want to sky dive and you're wondering where to sky dive then I will say that there can't be many better places on earth to do it than at Lake Taupo.