Just about 1/2 hour north of Bend, Oregon is an amazing spot for hiking, rock climbing, horseback riding, picnicking and photography. Smith Rock State Park is reminiscent of the beauty of the Grand Canyon, on a much smaller, more affordable scale. While camping is not permitted in the park, you can pay just a few dollars for a day's worth of parking and explore the numerous recreational opportunities in the geologic formation. If you are visiting Central Oregon, Smith Rock State Park should be on your "must see" list of things to do!

We visited Smith Rock on Mother's Day and decided to hike the steep "Misery Trail" from the Crooked River up to a spot near Monkey Face, a huge rocky spire that is famous among rock climbers that visit the park. Although our hike was a little less than a mile, we gained over 1000 feet in elevation. Along the way, we watched the cars in the parking lot get smaller and smaller, and the birds began to fly below us.

If you are not up for such a strenuous hike, you can still reach Monkey Face along the 1.5 mile trail that winds along the river and gently climbs up the volcanic formations. Areas of the park are set aside for horseback riding and mountain biking. Some people even brave the chilly, fast-moving Crooked River during summer months. I was amazed to find out that there are over 1000 climbs in the Smith Rock park!

If you visit Smith Rock, there are a few things to keep in mind, per the Oregon State Parks and Recreation. First, there is no camping, as noted above. Second, there is a strict leash law for any dogs you bring along. Keep in mind that the park has experienced issues with off-leash dogs and owners that do not clean up after and/or control their pets. If you are reported for violation, you'll face a steep fine.

Third, you need to be sure to pay the daily fee, which you can minimize if you visit a lot of Oregon State Parks year-round, by purchasing an annual pass.

Be sure to read and follow signs that may be temporarily posted in the park, too. We noticed cautions to rock-climbers to watch for raptor nesting. Stay on designated trails for your own safety, and to preserve the environment for future visitors.

Finally, open fires are prohibited, along with camping. If you want to picnic and need to BBQ, then you must use the designated space for grilling, which includes propane tanks. There is absolutely no smoking, due to the fragile nature of the environment.

If you've ever been involved in Scouting, then you will be familiar with the phrase, "Leave No Trace." To summarize, you should take only photographs and leave only footprints.

This is especially true in a beautiful area like Smith Rock. Carry a backpack and be sure to cart out every bit of garbage with you. Do not pick flowers or rocks for souvenirs. Can you imagine if each and every visitor to the park did the same thing?

As you can see in this Hub, you'll have plenty of memories just by bringing along a camera and snapping each and every beautiful sight you see!

What to do at Smith Rock State Park

Smith Rock is a rock climber's paradise. Due to its formation process and tuff/basalt composition, there are many gaps and holes in the sheer faces, which allows plenty of hand and foot-holds. Climbers can scale 400-500 feet vertical. But, even if you are a novice climber, don't shy away from the challenge. There are many climbs at the Park, with a range of difficulty. In fact, some people credit Smith Rock as the birthplace of sport rock-climbing. If you are a hard core rock climber, be sure to check out a Smith Rock Book before you visit the park.

Hiking and walking also are permitted, but mountain biking is not. Many people enjoy the area for photography and bird watching. Often, you can spot bald eagles and ospreys flying overhead!

Smith Rock is literally centered in the middle of Central Oregon. One of the best aspects of the park is that just about anyone can enjoy the features on any given day. If you are in excellent shape, then scale the rock formations with other boulderers. If you like a moderate challenge, then scale the Misery Trail, as I did with my boys (ages 11 and 9). Want to take it easy? There are options for you along the gently sloped river trails.

There are so many beautiful sights to see at Smith Rock State Park, I have to include a few more shots from our Mother's Day outing. Truth be told, I took over 50 photos that day! If you can't make it out west to see for yourself, you can still enjoy the majestic beauty of Smith Rock State Park in films shot in Oregon including The Postman (1997), Even Cowgirls Get the Blues (1994) and Rooster Cogburn.

I love nothing more than getting outside in the fresh air and working out. If I can take photographs along the way, I am even happier. No wonder I live in Central Oregon! It wasn't just fortuitous, it was destiny! The volcanic history of the region is so amazing, and provides for plenty of recreational and educational outings for singles, couples and families. From the Lava Cast Forest to Fort Rock, we've been exploring it all!

Even if you are not so lucky as I am to live in this "resort" community, you will love visiting! Be sure to check out the Central Oregon Visitors Association for much more information about Bend and Deschutes County. Like us, you may just fall in love and decide you want to live here! Look me up if you do!

The formation of Smith Rock is an integral part of the varied experiences you can have at the park. Smith Rock was "born" about 1.2 million years ago when basaltic lava flows from the Newberry volcano flowed into the Crooked River Canyon. Further formation came as the result of other volcanic action, resulting in a tuff ring, portions of which remain. In a related hub, I explained the process of a tuff ring:

The creation of a "tuff ring," is described by geologists as occurring when a volcanic vent is located in a lake or other area of abundant ground water. When magma rises to the surface of the vent, it meets the muddy lake bottom. Like other types of volcanic activity, molten basalt will explode from the ground, when steam pressure becomes too great from within the earth. Hot lava and ash erupting from the earth eventually settle around the vent, in a ring formation, and cool in the lake waters. Fort Rock is one of approximately 40 tuff rings in the Brothers Fault Zone of the Fort Rock Basin.

Once a tuff ring is formed, Mother Nature will work her magic through erosion (wind and water), as well. 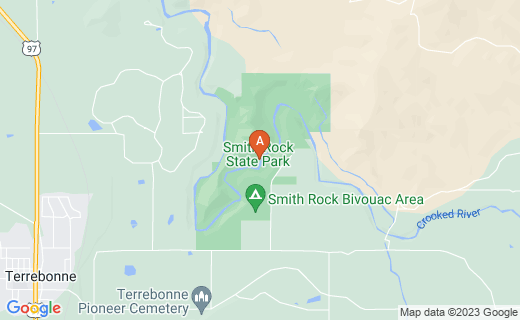