Smith Rock State Park in Central Oregon is a place that will take your breath away literally! Whether you are traveling to rock climb at Smith Rock or just to enjoy the 10 miles of hiking trails, it will be an experience you will never forget.

Located about 10 miles northeast of the city of Redmond, Oregon, Smith Rock State Park is located just outside the town of Terrebone. This magnificent state park attracts more than 500,000 rock climbers per year to scale the over 1000 vertical challenges located on the many beautiful rock faces that make up the park.

Smith Rock is a rock climber's paradise and people from all over the world come to Central Oregon just to climb here. However, even if you are not into rock climbing, you can make a day trip to the park and enjoy some of the most spectacular scenery Oregon has to offer and experience a hike that will quite simply leave you breathless. Smith Rock is another of the volcanic wonders of this part of Central Oregon and was formed in much the same way as the Cascade Mountain Range. The spewing of ash and millions of years of erosion by the elements has created a natural masterpiece in the many colors and sites that we know as Smith Rock.

The rock formations are absolutely staggering and the glorious colors that you see in the rocks are ever changing. Given any time of day, you will see the rocks in a different light and as well, see them in their changing colors. Their textures are likewise variable from one part of the park to another and depending on the season, the foliage itself lends even more contrast and beauty to the surroundings.

Adding to the pristine feel of the park, the Crooked River is a site to see as it courses through the canyon having carved out its path so many years ago.  There is abundant wildlife to see in the park, marvelous hiking trails of more than 10 miles and of course the over 1000 climbing venues.  It is easy to see why Smith Rock is perhaps the most popular of all of Central Oregon's parks and perhaps one of the most popular in all of Oregon.

Smith Rock boasts 2 of the most difficult rock climbing routes in the United States. People of every age come here to rock climb - from the novice to the experienced.  There are always classes and demonstrations available for anyone who is interested.  In the fall, there are also interpretive classes organized at the park by the park experts.

If you are taking dogs with you to the park, they MUST be kept on leash at all times and if not, there is a $142 fine for this which is strictly enforced.

Also keep in mind that as you are going down the steep 1/2 mile shale path to the floor of the canyon, it is a very narrow path and you are passing other folks constantly - with and without dogs so dogs must be kept under control at all times.

If you are taking dogs into the park, you are expected to also dispose of their waste properly so carry doggie clean-up bags.

Don't forget water - for humans and dogs alike. It is a steep climb and some of the trails are extremely strenuous so make sure you are hydrated and that you take along water. There is a water fountain at the bottom of the trail but none anywhere else - also no trash cans are located along the trails so pack out what you pack in.

Take your camera - the views and photo ops are incredible! On any given day or even at different times in the same day, you will never get the same picture of the canyon walls twice.

If you become engrossed in watching the rock climbers above you as you walk down the trails, be aware at all times of falling rock. Usually the climbers will yell out to you but be aware that there is a chance that rocks will tumble down from above.

Also walking along the paths, be cognizant at all times of bull snakes. These are pretty huge, harmless snakes that continually meander across the paths. They literally stretch from one end of the path to the opposite side.  If you are looking up at the climbers, it is possible that you may step on one and not be aware until it is too late. It is more frightening than anything else - to you and the snake! (Been there, done this)

STAY ON THE PATHS at all times!!! This park is rattlesnake country and they can strike in an instant before people are aware that they are there. Listen for the telltale rattle but the best way to avoid being bitten (which is a medical emergency) is to stay on the paths. There are areas in the park in which rattlers are more prevalent at certain times of the year - pick up the information at the provided stations in the park to be safe. (Another really good reason to have dogs on leash and staying on the paths)

There are several grocery stores, gas stations, restaurants and a pub for convenience and satisfying your appetite before arriving at the park or on leaving the park in Terrebone.  Redmond is 10 miles south as you exit in Terrebone.

If you are looking for an adventure and you are a rock climber, Smith Rock is your cup of tea!

If on the other hand, you are looking for a spectacular natural wonder to visit, Smith Rock is also for you.  Even if you choose not to hike the park, the parking lots have beautiful vistas that are breathtaking and make for great photo opportunities.

Most of all, enjoy this treasure in the heart of Central Oregon.  Seeing is believing - the beauty of Smith Rock is unparalleled. 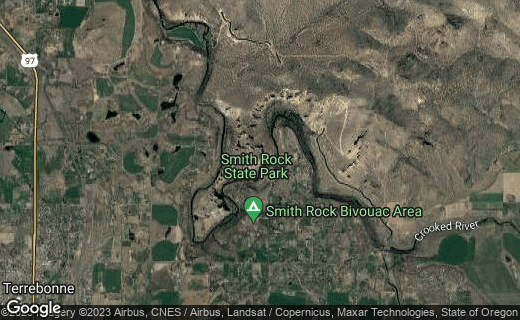