Travel and Tourism Around the 3-in-1 Falls

In 2009, readers voted at StoodThere.com for the 100 Greatest Places to Stand in America (for photos and travel attractions). Niagara Falls was voted at the Number Four Greatest Place!

Niagara Falls spans two countries and includes three water falls - American Falls, Canadian Horseshoe Falls, and Bridal Veil Falls. These three wonders are at least 12,000 years old, as old as the migration of the Native Americans that have lived there since they appeared in North America, especially the Seneca Nation of the Iroquois Confederation.

The word Niagara itself comes from a a word among the Iroquois languages: Onguiaahra, translated into English as The Strait (reference: Six Nations Reserve, Ontario). Such historical interest and natural wonders make for a healthy Travel and Tourism business and attract many guests.

One element of tourist business around Niagara is the set of tours available by boat underneath the falls by the vessel Maid of the Mist, first launched in 1846 about the time that the American railroad systems began to operate.

Several Maids followed after the original, right up into modern times in the 21st Century. Back in the 1930s and 1940s, people I have interviewed related that they donned rubber suits to go behind the falls. Today, sightseers simply become misty-wet, from what I understand, but not drenched. 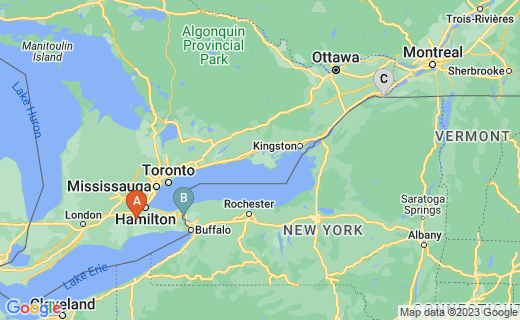 With the expanding tourist movement in Niagara Falls, a new zip line ride was added to the attractions in 2016. Along the Canadian side, four parallel zip line devices travel at speeds of over 40 mph at least 2,200 feet.

Niagara Falls is a set of two twin cities and together form a popular vacation spot in the northeast United States and Southeast Ontario Province, one visited by some 12,000,000 travelers each year. Many of these are honeymooners that celebrate their new marriages, but people from all over the world come to Niagara Falls just to see the three immense water falls and to experience the other attractions in the area.

Niagara Falls is located in the Western NY Labor Market Region of the state, which includes the county of Niagara, along with Allegheny, Cattaraugus, Chautauqua, and Erie counties. The city also is included in a smaller area known as the Buffalo-Niagara Falls MSA or metropolitan statistical area. This area includes only Erie and Niagara counties, for purposes such as projecting future high demand jobs within a particular decade (see below).

Honeymoon Haven: Legend has it that the first honeymooners at Niagara Falls were Napoleon Bonaparte's brother and new bride, but we have no written documentation. (Romantic though, isn't it? ♥)

American Side Maid of the Mist Tour Mummies and the Unbelievable

Niagara Falls on both sides of the American-Canadian border offers employment choices in all types of Travel and Tourism installations - restaurants, retail businesses, large hotels, resorts, guided tours, outdoor recreation and sports, and nameless others. A variety of fascinating museums make up a large part of the Niagara tourist attractions.

An Egyptian mummy was shown at Niagara Falls on the US side for many years. The background is that from 1850 - 1851, a man named Serrell constructed a suspension bridge over the falls gorge at Lewiston, using Egyptian-type pylon supports. A double-decker bridge followed, also in the style of Egypt. Then, in the 1850s, part of an Egyptian collection was purchased to begin the famous Niagara Falls Museum on Table Rock at 6650 Niagara Parkway, Niagara Falls, Canada.

In 1861, 6 mummies arrived in Canada to be displayed at the Falls. In the 1980s, work began in order to attempt to confirm whether the bodies are actually ancient and Egyptian, or not. In the meantime, the display alternates locations between the Canadian and American falls for display purposes and many people enjoy viewing them. It might be fun to work in this museum.

Daredevils of Niagara Falls: This museum exhibits the details of the people that went over the falls in a barrel, walked a tight-rope across the gorges, etc. -- I wonder if they include the stunt presented by the old Steve Allen Tonight Show in the early 1950s, where a very young Steve Lawrence and Eydie Gorme sat and sang on a tree branch far out over the falls?

Singing on a Tree Branch Over the Falls

Believe It or Not!

Ripley's Believe It or Not! Museum

This is perennial favorite for visitors that enjoy the strange, true, and interesting. I began reading the collection of books based on Ripley findings when I was a child and still enjoy them.

Be sure to visit

Ripley's Niagara. The museum has its own "wax museum" displays like the Tussauds' and more, and a theater as well as many fascinating exhibits. Additional attractions are presented in the Clifton Hill area near the falls.

The Niagara Aerospace Museum in New York is also very interesting. Once in Niagara Falls NY, it has moved nearby to Buffalo.

Many more museums and exhibits make the Niagara Falls area on both sides of the Canadian border an exiting, fun place to work and visit.

Suspension Bridge at Niagara Falls in 1886 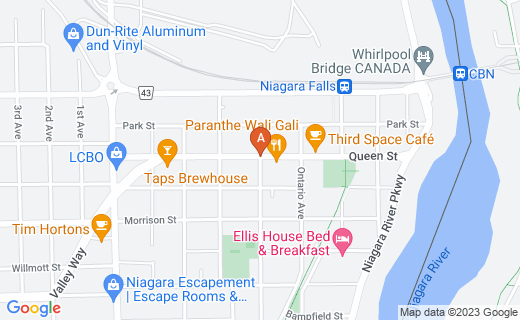 Maid of the Mist

Here are the most-advertised Top Job Listings in and around the Niagara Falls area on the Canadian side in Ontario Province. This includes the communities of nearby St. Catherines, Ontario. Many are in the Travel and Tourism Industry:

Within 25 miles of Niagara Falls on the American side, over 25,000 job openings were listed, including in Niagara Falls, Buffalo, Amherst, and Williamsville.

Relocation and Immigration - USA and Canada

The schools on both sides of the Canadian Border are all within a radius of about only 5 miles. if you'd like to move to Canada for work or education, please visit this site: Citizenship and Immigration into Canada.

Relocating to the US for Work

If you would like to move to the American side of the falls to work or attend school, see: Applying for Work in the USA as an International Worker and obtaining a Green Card. US Passort Card: Information.