At just 60 acres, St. Clement's Island is small—and getting smaller.

Some years later, in the latter part of the 19th century, shore protection was first constructed in order to keep more land from washing away. However, despite efforts to slow down erosion, St. Clement's Island continues to shrink.

Today, the island is about 60 acres in size--and getting smaller.

But St. Clement's slow disappearing act is perhaps the least compelling reason to visit it.

Known as "Maryland's Birthplace," the island is a truly unique locale rich in history and natural beauty.

The History of St. Clement's Island

Signs located throughout St. Clement's Island explain much of its history.

The first English settlers to land on the island named it after the patron saint of sailors, St. Clement.

Catholics who had come to the New World to establish a colony founded on religious freedom, the settlers were led by Cecil Calvert, whose father, George Calvert, had received a land grant from Charles I for the area at the "first fountains of the River Pattowmeck."

For over 200 years, the island was owned by the Blackistone family and known as Blackistone (sometimes Blakistone) Island. In 1962, when it was designated a state park, the island assumed its original name, St. Clement's.

In 1851, John Donohoo, one of the most important builders of lighthouses on the Chesapeake Bay, constructed Blackistone Lighthouse, a.k.a. Blackistone Island Lighthouse.

With its tower set atop a two-story brick house, Blackistone is similar in appearance to Donohoo's other lighthouses in the Chesapeake Bay area, which include the lighthouses at Point Lookout and Piney Point.

Although damaged by Confederate soldiers during the Civil War, the Blackistone Lighthouse survived. In 1932, because it was no longer of any practical use, it was decommissioned.

The original lighthouse burned down in 1956. Some news accounts attribute the fire to lightning, others to arson. Through the efforts of St. Clement's Hundred, a non-profit dedicated to the beautification and preservation of the island, a reconstructed Blackistone Lighthouse was completed in 2008.

Guests can arrange to tour the lighthouse by contacting the St. Clement's Museum at Colton's Point. On National Lighthouse Day each August, Blackistone is open to the public.

What to Take to St. Clement's

St. Clement's Island is a state park, so it doesn't have a gift shop or a Starbuck's—or even a real bathroom, although it does have portable toilets.

Everything needed for an excursion must be carried in by boat. Visitors should be prepared to carry everything back out, too, as there are no trashcans on the island.

To assure a pleasant outing, guests are advised to pack

The scenery is gorgeous, so a really good camera will come in handy, too.

The island is home to a variety of bird life, including red-winged blackbirds and osprey, which nest in boxes set on posts in the Potomac and along the island's shores.

Black-eyed Susan is also planted in beds around the 40-foot commemorative cross dedicated to the first Marylanders and in flowerbeds along the reconstructed Blakistone Lighthouse.

A book detailing the native plants that grow on the island is available at the St. Clement's Island Museum gift shop.

Guests are free to dock their watercraft near Blackistone Lighthouse.

Swimming, tubing, jet-skiing, fishing, motor boating and sailing are all on the menu at St. Clement's.

Steps from the dock lead to a sheltered picnic/rest area near the lighthouse.

Visitors may take a break from their water play to tour the island, use the facilities, stroll the island's narrow coast or enjoy a picnic.

St. Clement's Island sits in the Potomac at the mouth of the St. Mary's River and is accessible by boat only. Guests may dock their crafts near the lighthouse or, if visiting during the tourist season, take a water taxi to the island.

From June through September, the Water Taxi II leaves the dock at the St. Clement's Island Museum on Colton's Point. Trips to and from the island, which take only minutes, are free.

Although the taxi has regular drop-off and pick-up times, visitors can arrange special pick-ups by using their cellphones to call the museum's main number from the island.

Before getting on the Water Taxi II, visitors should check in at the St. Clement's Island Museum. There, a staff member will take the names of those traveling by taxi, assign them numbers and provide them with a map of the island.

So that no guests are inadvertently stranded on the island, the museum staff asks that those taking a taxi check in at the museum upon their return to Colton's Point.

St. Clement's sits off the coast of MD in the Potomac River. 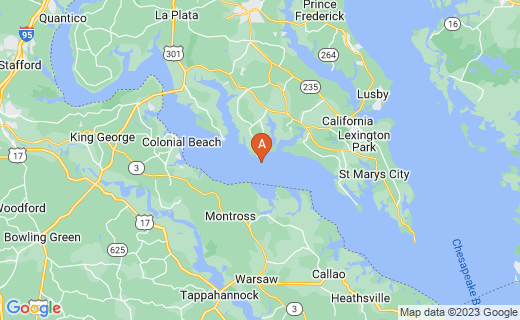 Nearby Places of Interest

The Little Red Schoolhouse, formerly known as the Charlotte Hall School, is also located on museum grounds, just across the lawn from the museum proper.

Relocated to its current site in 1991, the Little Red Schoolhouse is an authentic 19thcentury one-room school.

Additionally, the Doris C., an authentic Potomac River dory boat from the early 20th century, is on display on the museum's grounds.

Dory boats, which have v-shaped bottoms, were used by fisherman on the Potomac and crafted almost exclusively in St. Mary's County, MD.