A Lovely Place to Visit Near the Tower of London

There’s a great place in London that is not well known with visitors and tourists but is full of really great restaurants and bars. St Katherine Docks (often incorrectly called St Catherines Dock) is just a hop and skip from the Tower of London so it’s right in the thick of things, but it’s a little bit quieter and calmer. It's a good place to wander around, enjoy a coffee, tuck into lunch or grab a pint of beer if you're over in this part of the city.

The History of St Katharine Docks

The history of the docks goes all the way back to 1148 when a hospital named St Katharine’s was opened thanks to Queen Matilda. There was also a church nearby called St Katherine’s By The Tower. This area grew and grew into an established community with schools, housing and plenty of riverside work. The whole place was thriving and it employed a large number of local people. A lot of the employment was in nearby warehouses which was low paid and was typical of the kind of tough, labour-intensive work that the working class had at the time in this city. By the end of the 18th century it was really over crowed and home to thousands of slums, and was also an area notorious for prostitutes.

At the same time London was a busy and successful port with a constant queue of ships and boats waiting to moor up and unload their wares. But it was felt that larger docks were needed, ones that could handle the biggest ships. A dock that could unload goods more quickly and efficiently, and a place that could store large amounts of produce. Also a place where some of the more expensive imports and exports could be kept safely.

In 1825 much of this part of east London was cleared to make way for these new docks. A reported 1250 slums housing as many as 11,000 people, along with the hospital and church, were all demolished and a new dock with warehousing was built in its place. The engineer was Thomas Telford and the architect was Philip Hardwick. The job was completed very quickly and in 1828 St Katherine Docks became the fastest handling dock in the world. Some of the finest and most expensive goods around were brought into Europe via this dock.

During the London Blitz the docks were very badly damaged, as was a lot of this part of the city. The area never really recovered and the dock closed in 1968.

The whole of the East End of London and the Dockland areas have recently seen a huge regeneration and there are now lots of trendy apartments, businesses, pubs and eateries occupying the space. It’s become a very fashionable part of London to live and go out now, but has still retained a warehouse look. St Katharine Docks themselves are now a luxury marina and some the apartments around it are worth millions of pounds. There are roughly 200 mooring spots where a variety of vessels lower their anchor, and the Queen’s royal rowboat, Gloriana, can often be seen there glinting in the sunlight in its spot near Dickens Inn. You can't get right up next to it, but it sits in the water about 10 metres from the quayside fully visible and instant recognisable. The boats that pull up here are a mixture of luxury yachts and wide Dutch barges. Quite a change to the cargo ships and slums that were here in past centuries.

Where is St Katharine Docks?

The nearest tube station is Tower Hill which is the same station you need if you visit The Tower of London. The entrance to St Katharine Docks can be found just to the east of the Tower of London. There is a walkway under the busy road that crosses Tower Bridge but you do have to look out for it. If you come out of the tube station and down the steps so you are looking at The Tower, take a left at the railings and follow this pedestrian path along the side and then under the road. Take a right as soon as you come out of the underpass, then look between the buildings. There are two narrow walkways and in just a few metres the landscape opens up and you can see the marina. The first time I went there, I was taken aback, I had gone past many times and just imagined office buildings were through there!

There are three linked areas of water, East Dock, West Dock and Central Basin, so if you visit make sure you walk around all of them. 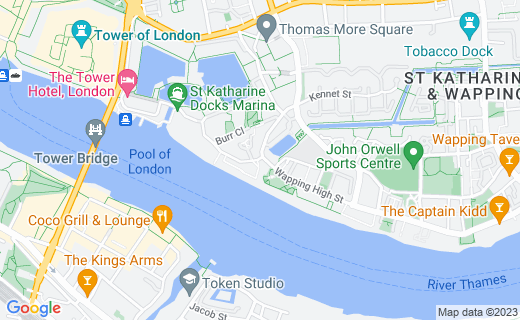 What Restaurants are at St Katharine Docks? Places to eat in St Catherine's Dock.

There are a number of bars and restaurants at St Katharine Docks. Many of these can get a bit busy with office workers from the nearby buildings in the summer evenings but that adds to the unique atmosphere there. Many of the places are well-known chains, such as The Slug and Lettuce, Zizzi, Strada, Café Rouge and Cote. In the middle you can find a Starbucks in a small, domed building that you reach via a short, wooden bridge. It has some outside seating so you can get a caffeine hit as you look over at the yachts. Then there are a few one-off eateries like Pizza on the Dock, Mala Kilikya’s and the River Lounge. Plus, my favourite place to eat, The Dickens Inn.

The Dickens Inn in St Katharine Docks was originally a building on the bank of the Thames. It was moved into its current position in the 1820s and was remarkably undamaged in the wars. It has been restored but most of the features are still there. It's quite large and really stands out in the docks. The ground floor is a popular pub and there are a number of seats outside many of which are covered by the overhang of the building. The next floor up has a grill restaurant where you can order up good old English cuisine like bangers and mash, fish and chips, chicken pie, Great Expectation burgers and salmon dishes. The top floor is taken up with a great pizzeria where the biggest pizzas on the menu are as big as the tables - the hugest I have ever seen. I have been there many times, and we have always really enjoyed our meals there. It is a few pounds pricier than other similar places in London, but the atmosphere and great location is worth it in my opinion.

There are also a few boutique shops around the water's edge. A couple of small clothing stores, a boat-themed shop with nicknacks, a life-aboard footwear place and a nice looking art store are some of the shops dotted around. There are also plenty of benches where you can just sit and people watch.