A Visit to St. Peter’s Church

In the historic town of St. George, in Bermuda, is a beautiful and breathtaking church, known as St. Peter’s, the Cathedral of the Most Holy Trinity.

In this article, you will learn about the history of the church, and the many treasured artifacts, stained glass windows, sculptures and statues contained within St. Peter’s church.

Oldest Protestant Church in the World

St. Peter’s is the oldest Angelican church outside the British Isles, and the oldest Protestant church in the New World. It is located in the heart of the historic town of St. George, in Bermuda.

Upon entering St. Peter’s church, the structure is quite picturesque and the architecture is breathtaking.

Inside St. Peter’s church, there are beautiful stained glass windows, and magnificent religious sculptures and statues.

In addition to the stone statues and sculptures, there are also special seating structures as the one pictured here to the right. Special seating boxes like this one were reserved for the special guests, including the Governor, or Sovereign, who were attending services.

Some of the stone statues in St. Peter's church were brought to Bermuda from London after World War II.

The baptismal font is made of Purbeck stone, which dates from around 1450 A.D. Purbeck stone refers to building stone from a series of limestone beds found in southern England. It was believed that the Purbeck stone was brought to Bermuda from England by the early settlers. 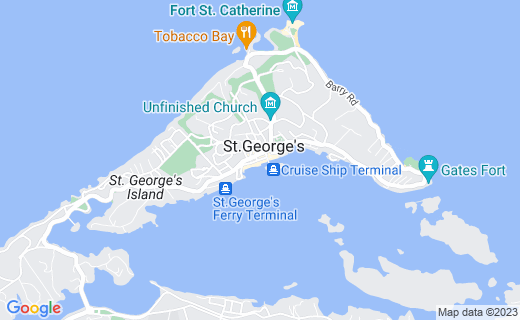