On the moor, high above Commondale, where the Hob watches unseen by day...

Transport by rail brings you from the Middlesbrough-Whitby line to Commondale, from where a footpath links the single platform with the village. There is a local bus service, the Moorsbus, which operates from the beginning of April to the end of September, handy for walkers and a supplement to the rail service.

For both rail and bus services search www.yorkshiretravel.net.

Parking is available around Commondale village for motorists. It might help to stop at the cleveland Inn and buy a few drinks, ask the staff for permission to park for the duration of your walk. They will keep a weather eye on your car(s). You should not be away for more than a couple of hours anyway, unless you have a picnic foreseen en route. Getting there by car is similar to Kildale, and there is a road that crosses the Moors from the A171 Guisborough-Whitby road. The last stretch of the road that comes away from the A171 is steep and 'bendy', however, and caution is called for when approaching the village from the north. Watch out for wandering sheep.

Starting from Commondale village, pass one of the finely-constructed red brick houses - using the locally-manufactured bricks - along the Kildale road. Turn right off this road and head towards the first stone 'trod' or causeway, and cross Whiteley Beck. This trod leads past a pair of war memorials to two loal men, Grenadier Guardsmen Robbie Leggott (killed in action in 1916) and Alf Cockerill (who died of his wounds sustained in fighting in 1914). These fellows were known to have been found of walking around their home turf before enlisting.

Finding the track onward to 'Hob on the Hill' is not easy, but even if you pass too far along the track you find a pre-historic stone boundary alignment. This takes you up some way to the left of the 'Hob'. Look out for this marker (a bit like a standing stone sausage). The boundary marker has carved on it 'S Hob on the Hill' (O.S. Ref. 646 124) and stands amid an excavated tumulus or Bronze Age burial mound. Often used in names (e.g. 'Hobson'), A 'Hob' derives from folklore linked to witchcraft and has been described as a hairy, ugly dwarf that dwelt in moorland steadings (a bit like the modern concept of Trolls). On the other side of the stone see the inscription 'RC 1798', referring to local landowner Robert Chaloner Esquire, (whose descendants owned iron ore-bearing land near Guisborough that was mined in the latter 19th Century). Around it are aligned stones that have been there several thousand years. You might like to leave the path to the south-west to investigate 'Hob on the Hill' and view the unique stone and earth bank boundary.

The stones - one of which has been carved with a cross to denote a 'change of spiritual ownership' - of the 'boundary wall' are set in a low embankment. Look around towards Castleton village in the south-east and Danby Dale beyond. Westerdale is to the right of Castleton. Looking northward you can see the North Sea beyond Guisborough (out of sight at this point below you). Westward are the Cleveland Hills ('Kliffe-land' or 'Cliff-land' to the Danes who settled the lower-lying land in the Guisborough-Stokesley area). Head roughly north-east - seaward - and locate a track that takes you to a line of boundary stones, then almost due north to 'Hob Cross'. At the bottom end of the boundary stones is 'Hob Cross' itself, just before the corner of a walled field. Along the way is a boundary stone marked 'SK AWD 1844' and below that 'TC 1856'. The next stone is 'Hob Cross' itself, marked like 'Hob on the Hill' with 'RC 1798' (O.S. Ref 646 134). This is the half-way point. Nearby is a private memorial to 'Lilian Foulkes RIP 3/7/1914 to 24/6/2007'.

A paved stone trod, the Quakers' Causeway cuts across the moor towards the ridge that overlooks Guisborough. Packhorse trains bore goods along pannier ways such as this ('panniers' were baskets strapped either side of the horses to carry goods to market) impressive stone-flagged track. You will soon look downward at Lockwood Beck Reservoir with the coast beyond. Looking eastward see the natural cone of Freebrough Hill near the Castleton road that leads to the distant A171 Guisborough-Whitby moorland highway (O.S. Ref 671 117). A tip: if you want to know what the weather holds, look out for sheep on Freebrough Hill. If they're scattered around the base of the hill keep your weatherproof handy.

Follow the clearly marked track downward from the Castleton road and Commondale comes into view. On the final leg of your walk into the village the plain red brick-built St Peter's church stands on the right. Lastly enter the village past the Old Post Office Tearoom and back to the Cleveland Inn.

Mapping out the route

Collins' ramblers' guide to walks across the North Yorkshire Moors up to three hours' duration. Find your way around with the aid of this handy book - it's easy enough to get lost, even if it isn't Texas - between coast and country. Informative, clear and value for money. As a past rambler - distance away south is my only limitation - I've thumbed my copy often enough to the point where the corners are dog-eared and browned (I think it's time I bought myself another copy)

Homing in on the Hob

Commondale Moor, North Yorkshire (steer northward from the station then north-east from the village) 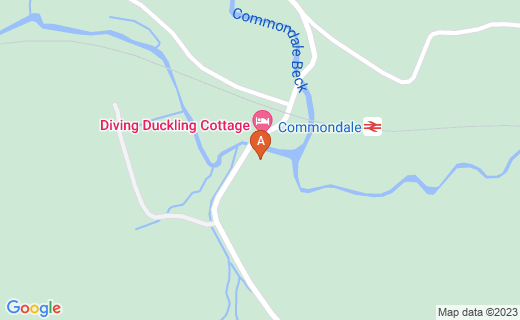 A 19th century community built around a brick and tile works near the North Yorkshire & Cleveland Railway. The brickworks site is now a scout camp

Over the moors and far away...

If you enjoyed this one, try some of the other walks - long and short - in the TRAVEL NORTH series. Walks and cycle rides extend from East Yorkshire (Hornsea and Flamborough Head) to North Yorkshire (Saltburn cliffops, Port Mulgrave to Hinderwell on the coast, Eston Moors, Roseberry Topping, Nidderdale, Upper Wharfedale inland; Chester-le-Street to Consett in County Durham, Kielder Water, Hadrian's Wall and Bamburgh in Northumberland.

There are also several drives in North Yorkshire that cross into County Durham and back into the top corner of Yorkshire on the way to Tan Hill, around Swaledale and Wensleydale via Richmond.

If you're left hungering for more, there are travel links on each page, with web addresses and phone numbers.